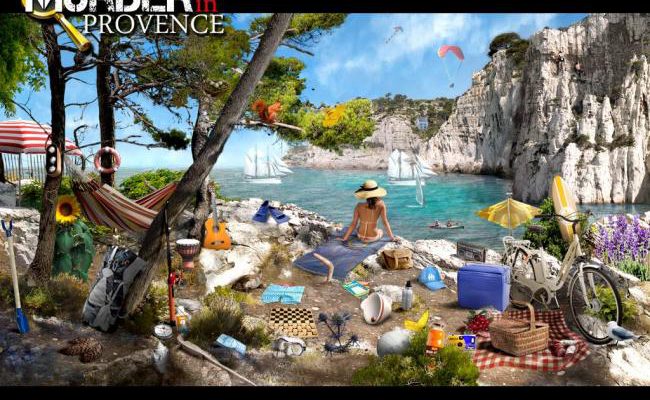 A harsh lesson on how not to make a hidden object game.

Murder in Provence tells the story of a young woman seeking her sister in the south of France. It eventually gets to the whole “murder” plot, but by that time you’ll have been put to sleep by the hidden object scenes, hassled with microtransactions, annoyed by expositional dialogue, and nagged with invite screens to the point where you would rather stare at your computer desktop instead of playing the game.

Murder in Provence adopts a typical Facebook game design, featuring short levels tied together by a bit of story and interspersed with riddles. Select which stage you want to play and spend energy points to unlock it. Work through the puzzles as quickly as you can (speed translates to a better score), gather your points, and head back to see what new things you can unlock. It’s an easy to understand layout that you’ll get the hang of right from the beginning. 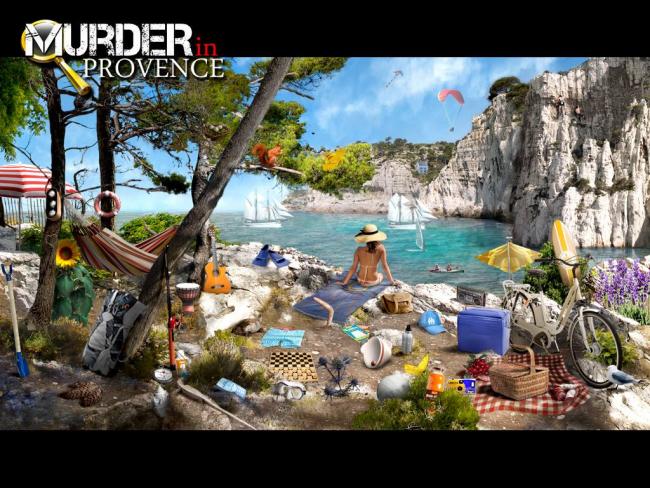 Hidden object scenes are painfully short, and most of them are so easy you’ll wonder if you’d have more fun writing a few lines of code to click the items for you. A dozen or so objects are listed at the bottom of the screen with more appearing once you clear older ones out of the way. They’re not very skillfully hidden; they’re just sort of sitting there. In plain view. Often taking up half of the screen. Might as well click and get it over with, right? The faster you find the objects the higher your score, and at the end of the scene you’ll get coins based on that score. Very straightforward without any surprises.

After the HOG scene you head off to work on an equally short mini-game. These take the form of riddles like you would find in a weekly puzzle magazine for kids. If you get stuck you can spend coins for three levels of hints, but we’ll be honest and tell you that you won’t get stuck, as these riddles are frightfully easy. Since Murder in Provence offers you multiple choice answers, it’s also a simple matter to just brute force your way to the correct option. If you get it wrong, exit and reenter the scene, sitting through a few loading screens and suffering a slight decrease in your reward. After getting it right you’ll collect a handful of energy bolts and move back to the main screen to see what’s next on the roster. 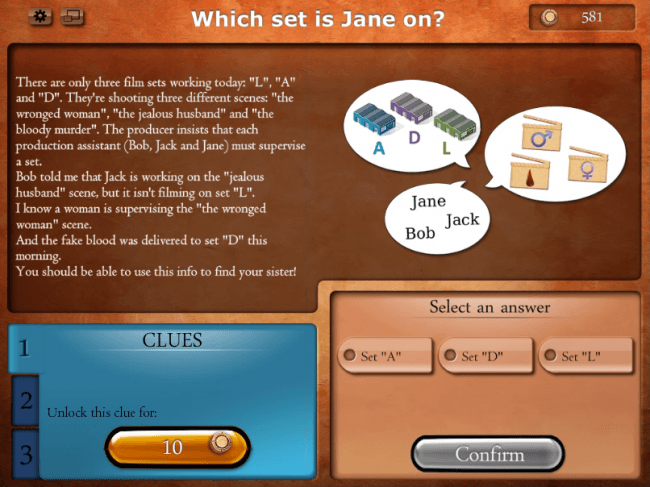 Murder in Provence makes full use of microtransactions to turn what should be a simple hidden object game into an exercise in frustration. Coins, energy, stars, and cash are the four main currencies. Each of them can be obtained in small quantities through normal play, but you can also refill them through the in-app shop. Coins are used for things like buying hints in hidden object scenes, while stars give you access to new puzzles. Energy refills automatically over time and prevents you from doing every level in quick succession. The real eye-roller is having to wait for certain events to take place in real time, such as traveling to a new location. Of course, you can spend cash to hurry it along, but really, what’s the point of making you wait ten minutes to walk to another building? Apart from encouraging a microtransaction, that is.

Murder in Provence comes across as a very sloppy game. It trips over itself to introduce puzzles, creating the most unusual circumstances as an excuse to let you solve a hidden object scene or a mini-game. The writing is awkward, filled with pointless exposition that wouldn’t pass as readable in a children’s book. The game suffers from nearly every misstep a game can make: too-easy hidden object scenes, puzzles that pretty much solve themselves, frequent loading screens, and microtransactions at every turn. The only thing it gets right is… well… you can play it without running into any game-killing glitches. That’s something, perhaps.

Echoes of the Past: The Kingdom of Despair Review