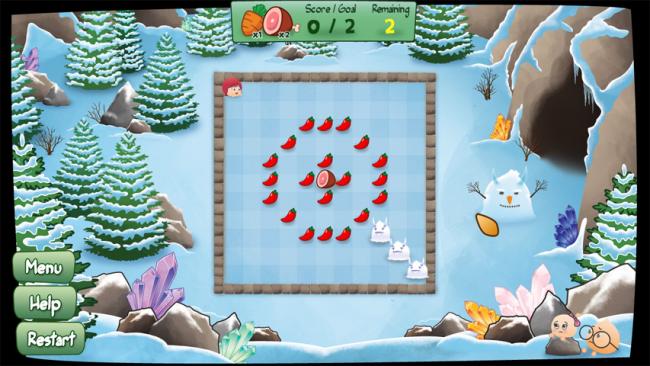 Munchies’ Lunch is a challenging but cuddly family-friendly puzzle game.

Munchies’ Lunch is a pleasant surprise as casual puzzle games go, offering gameplay with actual depth and a family-themed story that has actual heart. In Munchies’ Lunch, you play the matriarch of a family of bouncing cartoon heads that must skillfully outwit enemies as she tries to gather food and water. Her family is on the run from monsters who’ve driven them out of their forest home in a scenario that is inspired by Footloose Games President Vlado Jokic’s youth escaping from the Yugoslavian civil war.

A typical Munchies’ Lunch level places a selection of bad guys and foodstuffs on a grid. Gathering food, water, or power-ups is worth points and you need to get so many to pass a level. Some levels need to be cleared perfectly with everything collected while others let you sacrifice some food or power-ups to the monsters, who eat them if they step on a tile where they’re located. Munchies’ Lunch puzzles are ultimately a matter of movement, since monsters only move on the grid when you do. If you go right the monsters go left and if you go up, they go down. Certain power-ups let you manipulate your movement or destroy monsters.

Most games aimed ostensibly at an audience of kids or families end up being very easy, but this is not the case with Munchies’ Lunch. Playing a Munchies’ Lunch level amounts to solving a logic puzzle and some of them can be devilishly hard. This can be fun to tackle cooperatively, where you pass the level around to different people and see who can solve it. This game could become quite frustrating for a young player who had to tackle it alone, as many levels demand a lot of patience to solve.

Munchies’ Lunch includes around 100 levels split into four different themed areas. It doesn’t have much replay value, but the challenging nature of the puzzles mean the game probably won’t be beaten too quickly. While there’s nothing groundbreaking about Munchies Lunch, it’s a very attractive game with solid level design and an engaging gameplay concept. For families looking for non-violent games that are still good, it definitely fits the bill. More broadly, Munchies’ Lunch is a solid puzzle game that should be easy for anyone to pick up and begin playing.