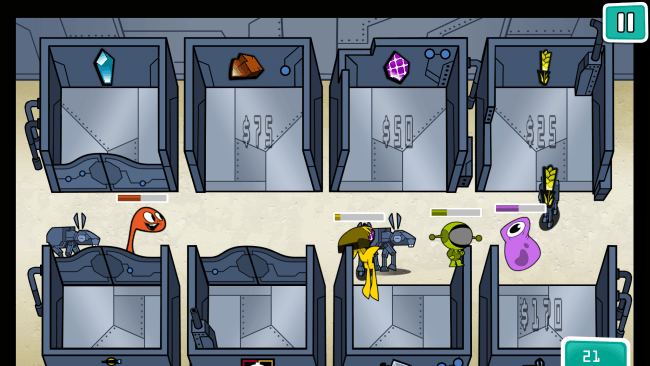 The MULE Returns, but it’s a bit of a donkey

M.U.L.E. occupies a unique and much-cherished niche in gaming history. It was about the first ever game to blend multiplayer and real-time strategy, all way back in the days of 8-bit systems. I never owned one of the platforms it ran on, so had never experience its pleasures, although I knew of its exalted reputation. And that reputation made a modern day remake like MULE Returns all but inevitable.

The game is one of those common curiosities that are actually fairly simple but devilishly hard to describe. Each turn you pick a plot of land, and then spend money on buying, equipping, and upgrading MULEs, robotic servitors that work the plot for you. There are three different types of resources: food, which you need to move about; energy, which is needed to power your plots; and smithore, which does nothing but is pretty valuable. 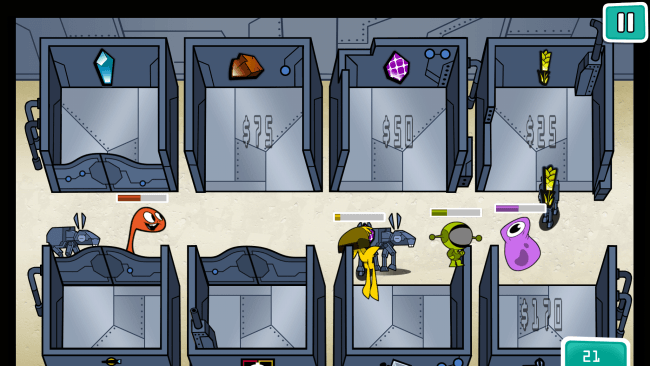 After production there’s an auction where you can sell goods you have an excess of and buy ones you need. The game has a simple but fascinating economic model that results in oversupply causing prices to drop and scarcity causing prices to rise. To win, you have to play the markets and make money, but beware: beggar your opponents and the whole colony fails, so a level of mutual cooperation is required.

We’ll start at the beginning with the incredibly patchy tutorial. This is a highly unusual and unintuitive game, and while not actually all that complex, it has a few important rules that you need to keep in mind. The occasional interface tooltips that comprise MULE Returns‘ learning experience are insufficient. And when I pressed “Help,” the web page of instructions it bought up was laughably useless. 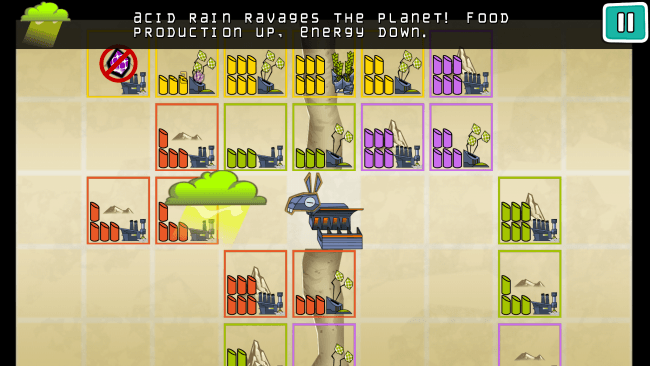 But both kept telling me it wasn’t overly hard and things would just click into place eventually. And eventually they did, at which point I realized that one of the key impediments to learning is that I’d been watching the AI moves to try and make sense of the game, and the AI is fantastically stupid.

It’ll happily let you corner the market in an essential resource like energy, make no attempt to redress the balance by producing its own, and then happily pay astronomical sums to buy what it needs from you in the auction. If you let them, the AI players will rapidly cause the colony to fail, losing the game for everyone.

This has some bizarre knock-on effects during the real-time elements of the game. Resource auctions are timed to encourage brinksmanship and late deals amongst the competing buyers and sellers. But the AI players just walk right down and sell at the lowest prices until they’re done and then walk right up again, leaving you doing nothing but staring forlornly at a slowly emptying timer.

The complete lack of challenge offered by the AI players might be forgivable if there was a decent multiplayer option. The original M.U.L.E. sold itself largely on that aspect, after all. But it’s just not there – just a placeholder promising that it’s coming soon. That’s enough to send most fans of the original running for the hills right away. 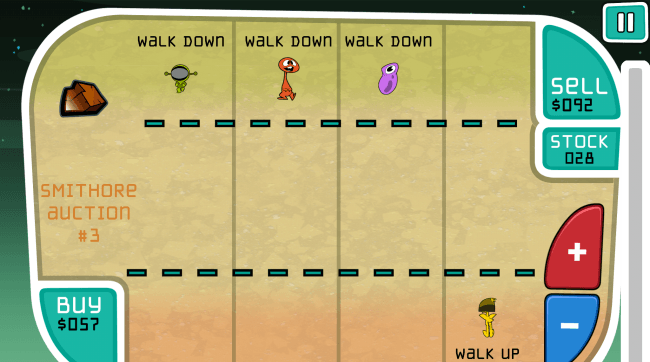 There are also a few important gameplay differences. I’m given to understand that in the original game, the acquisition of land slots and MULEs was turn-based and had important elements of strategic timing. In this version it’s just a real-time free-for-all.

MULE Returns is also riddled with bugs – one of which, an inability to re-enter the store to upgrade MULEs later in the game, is a complete showstopper that ruins the game when it crops up.

It feels more like a half-finished alpha than a polished release, and in truth, I suspect that’s what it is. Perhaps the developers needed a cash injection to see the project over the finish line and thought a soft release was the way to go. But this is the version I have to review: M.U.L.E. looks to have been a genuinely inspirational game even through the fug of nostalgia around it, and one deserving of a reboot. But it deserves much better than this.