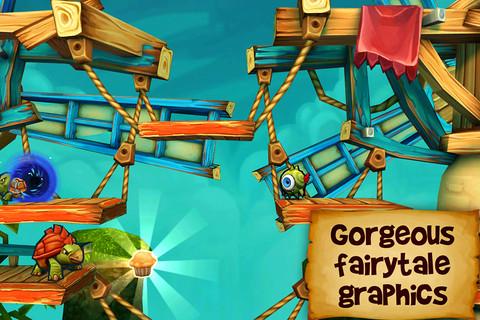 Wouldn’t you know it? You’ve just finished baking your famous muffins and set them out to cool, only to turn your back and find out that the Lava King stole your tasty pastries. What’s a fairy godmother to do? Why, recruit a slew of heroes and mythical beasts to get them back, of course! Hey, quests have had flimsier premises, and this is the start of the delightful Muffin Knight for the iPhone.

The core gameplay idea is based around fast-paced action/platforming mechanics. Players are given relatively small maps that they have to run around, collecting muffins and fighting off the various enemies that drop down out of the sky. Movement is handled via two motion controls, as well as buttons for jumping and attacks.

Each time a muffin is collected from its random map position, the on-screen player-character changes to a different type with different attack types. As players continue to earn experience, new forms and levels are unlocked.

The new forms are, quite honestly, a bit of a riot. There are standard fantasy types, like crossbow-wielding knights and flame-spewing dragons, but some of the later characters – such as rainbow-pooping unicorns or ninja cats (who throw lethal shurikens) – are just hysterical to unlock. Not only that, but these different characters really shake up gameplay because their attacks are so different. Going from a character like the wizard, who can fire an automatic stream of lightning across the screen, to the unicorn, whose turds work like landmines, presents an incredible shift in play mechanics.

The gameplay is incredibly fast-paced, especially after players have collected a number of muffins in a level and the enemies are becoming stronger and faster. If an enemy makes contact with a character, that means instant death and the game’s over; these enemies will try to make their way to a pit that they eventually drop down, and players have to prevent them from getting to that point.

There’s also an online mode, which pits players against each other in a race to collect the most muffins while simultaneously fighting off more enemies. This is certainly fun, but there isn’t enough of a community around yet to fully take advantage of the mode yet. 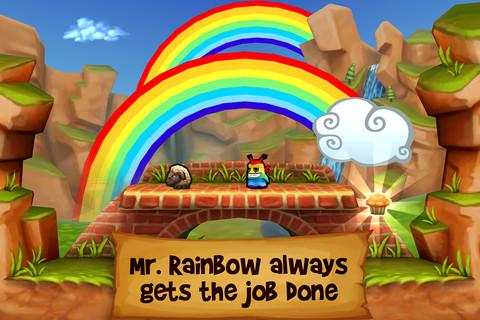 The visuals and audio, meanwhile, are great. The graphics are bright and cartoony, and the different character designs show a lot of originality and creativity. Not only that, but the environments also show the same visual flair. The sound, meanwhile, is great, between all the effects and lovely music.

Overall, Muffin Knight is a pretty delicious little game. It’s challenging, fun, and addictively fast-paced. Not only that, but the constantly-changing gameplay provides players with varying gameplay mechanics that help keep things fresh and interesting. You should definitely check the game out, if for no other reason than to control a unicorn that poops explosive rainbows.