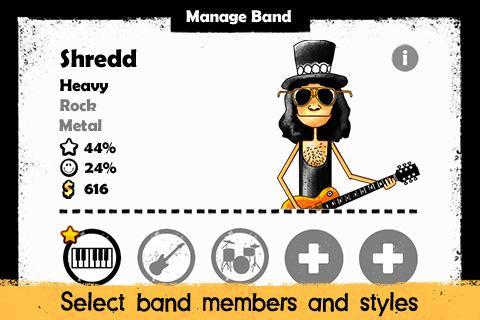 Have you ever wanted to be the manager of a rising superstar band, co-ordinating recording sessions, doing PR and keeping those band members happy? Unless your name happens to have “Simon” or “Cowell” in it, MTV Star Factory will probably be the closest you’ll come to achieving this dream.

A resource management game at heart, MTV Star Factory gives you $25,000 with which to start up a band. You can hire either the game’s pre-set musicians or create your own. Your musicians can shred on the guitar, rock out on keys, belt out their voice, hit the drums or mix as a DJ. Each player has their own best genre, or style of music. Naturally trying to combine like-minded musicians (along with being a manager who specializes in a genre) nets you a better band. After that, you’ll be composing music, mixing tunes, releasing tracks, playing gigs, buying ads and even keeping the band happy and productive. Each week, your band can do one task, so the challenge is making sure that you are able to keep that cash coming in while building your empire.

Your band has ratings of credibility, abilities and happiness. Of course, the higher each of these ratings is, the better the band will perform, and the more success you’ll get as a manager. The goal of the game is to achieve every managerial goal on your wall, from having a top tune on the charts to managing an a cappella (only vocal) group. Once you successfully get a tune from your first band on the charts – something that won’t take you too long – your in-game self will realize that to achieve real success you’ll need to manage up to five bands at the same time! While this sounds like a daunting task, the in-game calendars, tutorials and menus are very helpful.

Performing each band’s weekly task is done via mini-game. There are several different tasks to perform, each requiring a different skill. Playing a gig for example, helps your bands profile and credibility (not to mention earns you cash). To play a gig you tap the numbers 1, 2, 3, or 4 which are on the bottom of the screen like buttons in time to the tune that’s playing. Think a rudimentary Guitar Hero. If the band’s genre strength matches up with the locale for the gig – no point in playing Europop in a Goth Metal bar, right? – the combinations tend to be a lot easier.

Other tasks like composing are a touch more ethereal and harder to control. You float a circle around your band’s virtual head collecting “ideas” which are geometric shapes in various colors. If the color of your circle matches the shape’s color, you get a better idea. If you collect a lot of shapes the song that the band writes is of higher quality, and you can go “deeper” by entering a vortex. 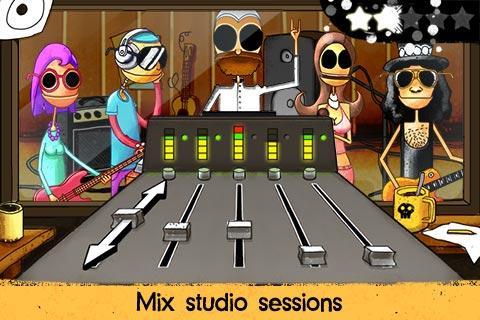 The main issue that plagues MTV Star Factory is one of control. Everything just feels loose. The composing mini-game is very similar to controlling Spirit, but it’s just not as responsive. Other activities like mixing the tune require some finicky movement over a mixing board. It just doesn’t feel solid enough.

The tunes also aren’t anything to write home about. For a game that’s about making music, MTV Star Factory‘s in-game soundtrack is pretty lame. Granted it all has to sound like generic genre music, but it gets repetitive rather quickly. Fortunately the graphics help make up for this. MTV Star Factory has a fun, quirky visual style to it, and is very detailed. Each musician has great personality to them, and the silly, bouncy animation brings these odd stick figures to life.

With lots of goals to achieve and many activities, MTV Star Factory is a refreshing take on the resource management genre. Sure it isn’t perfect, but no band ever is. Definitely give MTV Star Factory a try. It will probably surprise even the harshest critic.