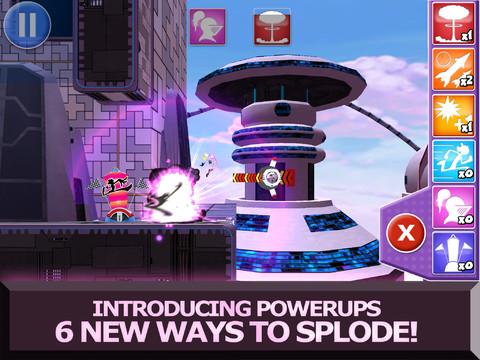 Ms. Splosion Man goes blasts her way into your pocket

Released back in the summer of 2011, the explosive sequel to ‘Splosion Man added environmental variety, increased difficulty, and new gameplay elements to go along with its pink character palette. The ‘Splosion series was one of the few remaining Xbox exclusives, but no longer. Along with a straight PC port, now you can finally ‘splode on the go. Ms. Splosion Man retains its awesome and charm on your iPhone and iPad, but the additions to this port threaten to contain the blast.

The plot is minimal, but the attitude is bursting at the seams. Your orange counterpart from the first ‘Splosion has been captured by Big Science, and its up to you to get him back. Pop culture allusions, pot shots at Bush, and parodies of female pop “singers” come fast and furious. Actually, the dialogue and text in the game are so rapid fire as to be frequently missed. Loading screens are so fast that messages can’t be read in time, and your pink lady’s quips can easily be lost in the shuffle. It’s a small but valid gripe, because this is a rare genuinely funny game. Even the Mean Girls meets Aperture Science tutorial is highly entertaining.

Even if you missed the original incarnations, you probably know that the ‘Splosion series boasts kinetic, satisfying, high-quality platforming, and the same holds true for this version. The ‘Splosion gameplay conceit takes the now-second nature actions of double jumps and wall kicks and extrapolates them into a compelling platformer. Skilled players will be able to time their jumps, bounces, and rebounds to create near-constant air time. Like Major Magnet, Ms. ‘Splosion Man is at its best when well-executed inputs lead to perpetual motion. Peripheral gameplay elements like launchers and zip lines add variety to the fireworks show, and you’ll utilize your powers intelligently and intuitively, whether solving puzzles or bursting free from a towering boss’ grip.

The Super Mario World-inspired stage map holds around 45 levels, complete with secret exits. Each level contains a hidden pair of shoes for completionists to find, along with secondary objectives that give levels a bigger boom than just getting from left to right. These objectives are tiered, so you’ll have to complete one set to unlock the next, and they include finishing stages faster than QA team ghosts.

Levels are longer than ideal for mobile play, but there’s always the option to pause and checkpoints are usually plentiful.

Ms. Splosion Man’s simple controls, flashy visuals, and level structure should have made this brilliant game a perfect fit for iOS, but two issues sadly bar this port from the mobile pantheon. The first is the limitation of the touch screen directional pad. Control is adequate the majority of the time, tight even, but trying to make course corrections in mid-air or turn on a dime aren’t always doable. The controls aren’t unusable by any stretch, but they make up an unacceptable percentage of deaths, even if there’s no penalty for dying.

The other problem is far more grievous. At a $2.99 launch price, Ms. Splosion Man is already premium for a mobile title. Levels can technically be unlocked with in-game currency, but the amount of grinding required will be out of the question for the majority of players. There are only 3 levels available at the outset, so to put it starkly, you’re paying $1 per level. Some might even call it a $3 demo. In-app purchases have their place, but this instance would have been far more palatable if the developers had just charged more to begin with, rather than turning each chunk of the game into an a la carte level pack.

Ms. Splosion Man is a great game somewhat diminished by an imperfect port. If you can swallow the business model and shrug off a few deaths that weren’t your fault, you’re in for a humorous, challenging, and rewarding time. That being said, Ms. Splosion Man is still best played with a controller, and best purchased for a single amount.

Edge of Twilight – Athyr Above Review