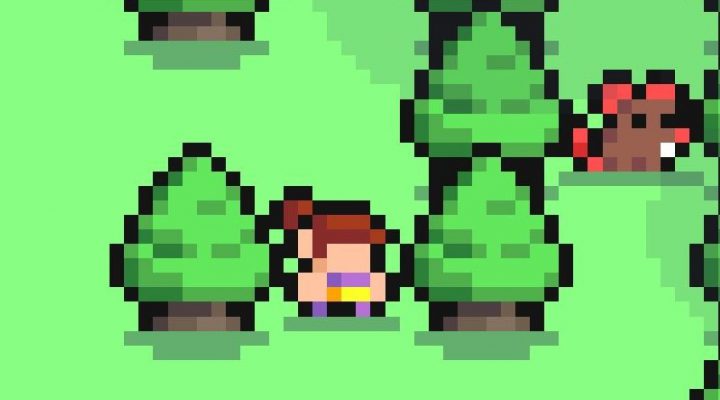 Neat DIY flavour that'll appeal to those who like trial and error.

Really gets you thinking, especially the tit-for-tat battle structure.

Pixel art is perhaps too low res for many players.

The movement controls are sticky and don't always work the first time.

First things first: Ms Spell is not a word game. It is not a game about spelling. Given the glut of word games that have been released in recent months, this might disappoint those looking for their next word game fix. Yet it’s likely to delight those of you out there who are so over language arts quizzes packaged as fun. Instead, Ms Spell is a new pixel-art based roguelike from MicRogue creator Jason Pickering. No reading or spelling required here.

Ms Spell is a game was clearly designed with a lot of heart. The game’s developer had a clear vision for what he wanted the game to be and executed perfectly. All of the major aspects of the game feel deliberate — from the way Ms Spell moves around the screen and the sound effects to the algorithm that determines how the floors will laid out.

However, like a Jackson Pollock-inspired piece at the local art gallery, there’s a good chance that the developer’s vision will be underappreciated by the average player. In other words, when it comes to those who give Ms Spell a try, there will be quite a few folks who will fall madly in love with it — but the majority (casual gamers in particular) might find themselves less than impressed.

This isn’t a slight on the game. Not all games are designed for the masses (nor should they be). Ms Spell is a game that has a built-in niche and will undoubtedly pull in others on the outskirts of this niche that can see the vision and beauty in what others will dismiss as quirks.

For those who love Ms Spell, the super-low res pixel art graphics will have a beauty of their own, transporting the player way back in time to some of the earliest NES titles. That there’s no substantial tutorial won’t scare them off. These players will get a sense of accomplishment from being able to figure the game and its mechanics out on their own – from the purpose of each item to (spoiler alert) the fact that you don’t need to pick up all the pages of the map to complete the level.

However, for others, particularly those who are less familiar with turn-based roguelike games or roguelike games more generally, these same things will likely be major turnoffs. Rather than seeing a work of art in Ms Spell, they might describe playing the game as having a crack at Hitman GO late at night with your glasses off. The turn-based nature of the game could feel too slow. Not having a thorough tutorial will be a deal-breaker as they try and fail to cast the right spell for the right situation. They’ll risk their lives scrambling around trying to pick up all the pages even when their spell book is full, often dying in the process.

There isn’t one take on the game that’s more valid than the other. While those who stick with Ms Spell and cherish it’s ‘figure it out yourself’ spirit might feel morally superior to those who don’t dig it, it’s really just a matter of taste. If you take a car in to the mechanic, it matters less whether they learned how to fix a transmission from a YouTube tutorial, in a classroom, or through trial and error (unless your car is the experiment) and more how well it holds up as you drive away. It’s the same here. There are no right or wrong gamers, just those who this game suits or doesn’t.

If you’re still on the fence about Ms Spell, there’s only one way to find out which camp you’re in: give it a try. With the game costing less than a great cup of coffee, there’s little to lose.

Tape It Up! Review: Sticky Fun