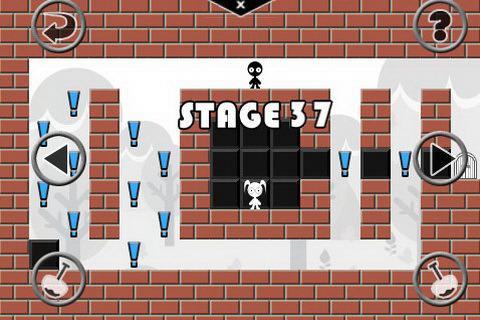 It’s fairly common for the bride or groom to get held up on their wedding day. Usually traffic, nerves or being tied naked to a lamppost are to blame. For the unfortunate Mr Yin and Mrs Yang, being dragged into two parallel universes has kept them from completing their nuptials, and only your puzzle-solving expertise can reunite them.

That’s quite a set-up, but it elegantly (if oddly) sets up a simple game of cause and effect. Presented with a two-tone grid-based playing field, you must alternate control between the black Mr Yin and the white Ms Yang. For Mr Yin, black blocks represent solid objects, while white blocks can be passed through as easily as air. For Ms Yang, the opposite is true.

Both characters can dig or fill in squares immediately below and to the side of them in their colour, forming or taking away a solid platform for them or their partner. In this way, you must flick between the two to help both parties reach each self contained level’s exit.

Outside of this simple premise, there are very few embellishments throughout the 50 levels on offer. Exclamation mark boxes only appear when you’ve passed through them, while ‘X’ marks the spot where you can neither dig nor fill in. While these are obviously meant to provide twists on the formula, however, they often just limit your choices and effectively sign-post the solution.

You’ll need very little help or encouragement to find a solution throughout the first half of Mr Yin & Ms Yang. It starts out remarkably easy, and stays this way for some time. While it’s a neat concept, it’s hardly a revolutionary one that needs considerable hand-holding before we can grasp what’s required of us. A couple of tutorial levels would have sufficed.

It’s a shame, as when the game really seeks to stretch you by requiring tight cooperation between the two sides, it’s at its best.

The visuals are far from cutting edge, but they suit the game perfectly. It’s another of those stylised pixel art affairs, which calls to mind many of the games you’ll have played in the late ’80s and early ’90s (if you’re over the age of 25), though it’s impossible to put your finger on any one game it looks like.

The audio, meanwhile, is composed of a jaunty piano-and-synth ditty that you could imagine scoring an early Tom Hanks film. Or perhaps that’s just me. Either way, it’s so inoffensive that even its innate repetitiveness doesn’t prevent it from being instantly forgettable.

That’s perhaps Mr Yin& Ms Yang‘s main weakness overall. It’s technically and conceptually proficient, but it completely failed to ignite anything beyond mild appreciation on my part. It’s good – well above average, in fact – but you’ll have played plenty of cause and effect puzzlers on iPhone that are as good if not better.