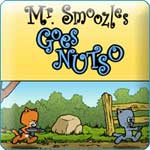 Mr. Smoozles Goes Nutso is an adventure game based on Steve Ince’s popular Mr. Smoozles webcomic, which features a collective of bickering, anthropomorphic kitties and aliens who are mildly obsessed with video games.

The game’s look and feel is nearly identical to that of its source material. The feline characters are indistinguishable from their comic strip counterparts, and most of the environments and objects seem almost hand drawn.

The strip’s humor has been carried over as well. There are hundreds of lines of smile-inducing dialogue, such as those that are part of an amusing sequence in which a conflicted Ed (our gray furred protagonist) debates with himself over whether or not he ought to push a big red button that’s just begging to be pressed despite the fact that there is a sign above it warning him to leave it alone.

While the gags are generally accessible to those unfamiliar with the webcomic, fans of the strip will have the advantage of recognizing within the dialogue occasional references to story arcs that occurred before the events of the game. That said, Mr. Smoozles rookies are provided context for the motives and personalities of the game’s characters through a collection of framed comic panels hanging on the walls of the cats’ home.

The game begins with a bit of preamble about an evil race of aliens known as Goragons that have altered the fabric of reality, turning the world and its buildings into a weird sort of maze. Mr. Smoozles, unstable at the best of times, falls under control of the aliens and begins running around trying to blast his friends with a laser gun.

Players take on the role of his buddy Ed as he does his best to keep out of the way of Mr. Smoozles (and various other dangers, including gun-toting robots and floating mines) while completing a seemingly never-ending series of tasks that typically involve searching for objects and bringing them back to the characters or machines that need them.

For example, early in the game players are assigned the goal of telephoning a sister of one of the strip’s main characters. Ed’s first order of business is to find her phone number, which is accomplished by talking to another cat and getting a password to the computer on which it is stored. Next, Ed needs to locate a phone, but once he finds one he realizes he needs a phone card, which, through careful investigation, he discovers is located in a locked bureau, the key to which is in another drawer which Ed has thus far avoided because it contains the underwear of a female cat on whom he happens to have a crush. Once he gets the card and calls the sister, he gets an answering machine message that tells him she is out and that callers should ring her on her mobile—the number of which she doesn’t provide. Thus, a new search begins.

This is just one quest that occurs concurrently with scads of other errands and tasks that require players to search and re-search the game’s 60 environments for various items and interrogate repeatedly some 50 characters for clues. No need to worry about the difficulty of these investigations and puzzles; three levels of difficulty and the option to enable additional hints ensures that players of all skill levels are accommodated.

However, there is one problem worth noting: Too much backtracking. It’s common for games to require players to double back to retrieve items that weren’t available the first time they visited a location, but it happens a little too frequently in Mr. Smoozles Goes Nutso. This is especially true during the first few hours of the game, during which time players repeatedly travel from a village through a garden to various rooms in the cats’ home and then back to the village. All these round trips are enough to make players dizzy.

This one qualm aside, there’s not much to criticize about Mr. Smoozles Goes Nutso. Its clever writing, multitude of interesting tasks, and good production values make it a fine entry in the casual adventure game genus, and it packs enough play to make it well worth its price tag.