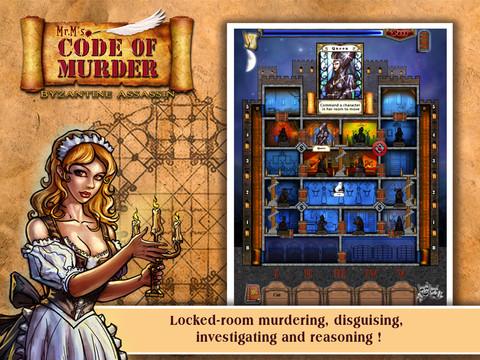 In a dark and baroque castle, a curious assembly of people have gathered together. How such diverse characters as a Duke, an Augur, a Scholar and someone’s pet cat have come together in this sinister place is never revealed. All we know is that amongst them is a deadly assassin who means, for equally obscure reasons, to murder five victims and then escape into the night before he or she is unmasked.

There are two sides to the game: one player take the role of the diabolical Mr. M and secretly chooses one of the ten characters in the game to be the murderer. All the other players are cast in the role of investigators and have to try and figure out which character is doing the killing over five rounds of secretive slaughter. Players are not tied to a character, and can move any of the characters during their turn, giving an oddly disconnected feel to the game.

When everyone has moved, Mr. M secretly selects a murder technique, which differs based on the proximity Mr. M’s character has to potential targets. Some have to be in the same row, others the same column, another the opposite gender and so on. The target dies and the investigators try and reach the room to discover the murder technique and thereby eliminate some of the characters as suspects.

Although set in a castle, and featuring named characters with vaguely relevant special powers, the whole thing feels fairly abstract. There’s no story or logic behind the theme of all these unrelated characters assembling for no apparent purpose other than to be killed, and some of the murder methods such as “fishing pole” are just bizarre. That immediately creates a barrier to getting to grips with how the game works. But it’s not the only one.

Mr. M’s Code of Murde: The Byzantine Assassin is an English translation of a 2009 Chinese board game, and the translation is absolutely atrocious. There’s no tutorial, the in-game help screens are useless, and you’ll have to read the supplied rules and stumble repeatedly over the laughable grammatical errors to learn the game. Thankfully, they’re not overly complex. But even when you’ve done that, differences between the in-game text and the rules will confuse and frustrate although, as far as I could tell, everything is enforced in-game as it should be. 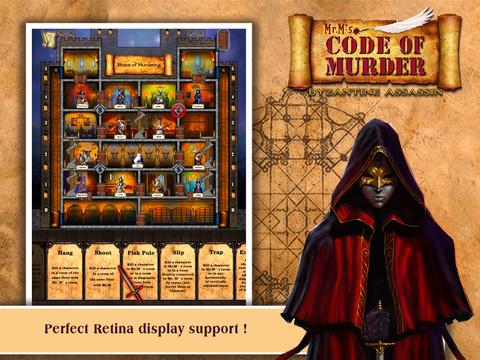 There are technical and presentational issues too, although thankfully no showstoppers. The app is prone to crashing occasionally and the touchscreen interface is clumsy and unresponsive. The graphics aren’t terrible but some images seem to be surprisingly low resolution. The music is cheesy and repetitive, and the catchphrases characters repeat when selected are low quality and hard to understand.

If – and it’s a big if – you can get past all these issues and play the game the way it’s supposed to be played, it’s fairly unusual. Deduction games tend to have a heavy social element of looking for secretive or suspicious behaviour in players and don’t translate well to computer play. But Mr. M’s Code of Murder is different because the various constraints of the murder cards means investigators can logically work out who could be responsible and who must be innocent, and the app tracks the results automatically, although I’m not convinced it does so with perfect accuracy.

It also means that a capable AI can be designed to do the investigating. Right now the app supports hotseat play for humans, and has a reasonable investigator AI. An AI for Mr M. is promised but currently a person has to fill that role so that’s what you’ll be doing if you play solo. And it’s very difficult: trying to bunch potential victims together to spread suspicion and stop investigators discovering the cause of death is tough. But there does seem to be one strategy which ensures the computer always has more than one suspect, so its final pick will give you a random 50/50 chance of a win. The design might be unusual, but it seems imbalanced and badly flawed. 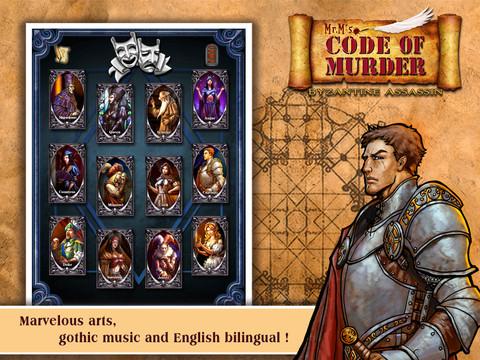 That’s not to say there’s no fun at all in playing. It’ll take you a few games to work out how you can win, and if you really enjoy the mechanics you can always play “properly” and try to work toward winning odds better than half. And at five to ten minutes to complete a session, it’ll serve as a quick filler. But given the sizeable barriers the game puts in front of players before they can get any enjoyment from it, and the generally limited appeal once you’ve put the effort in, this is a weak design by any measure.

Rage of the Gladiator Review