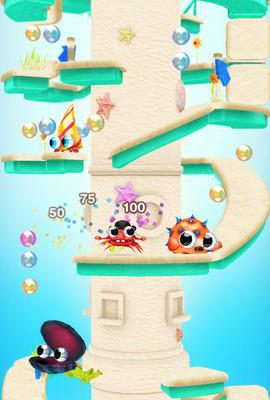 One-trick crab (in a sombrero)

Consider the crab. He wakes up and rides the rails, collecting arbitrary score items, rescuing children that may not be his, jumping on the heads of penguins. Back in 2007, one of the first games I bought for my first iPhone was MotionX Poker. It was the definition of a launch title- a proof of concept that did nothing but use the iPhone’s accelerometer to simulate the throwing of dice. That’s about where Mr. Crab lives.

Mr. Crab contains no story, dialogue, cut scenes, humor, or charm. Environments are flat and cookie cutter, there’s barely an idle animation to speak of, and the garish glued-on googly eyes art style burns the retinas. Even if the environments were a sight to behold, they recycle quickly. There’s no depth beneath the lack of context and vaseline sheen as you mindlessly ascend the drab tower of each level. It doesn’t matter if you interpret things as your crab walking or the level rotating, because your only inputs are to jump and occasionally wall jump. Hit a wall and you’ll reverse direction, hit an enemy and you’ll get knocked down a floor. There’s no way to die and no reward for a good run. The rotating camera can make some obstacles impossible to react to on the first pass, and the frustration of not being able to manually turn around can grate quickly. Falling, regardless of the cause, brings the value of your time into stark light.

Mr. Crab is broken down into 20 sections of either three stages or a boss, with each level lasting seconds. Every stage is completed by reaching an item at the top, and every boss is defeated by jumping on their heads X number of times. The alternate paths in each stage can be combed for optional crablings to rescue, but their collection is meaningless, and taking a hit causes them to be scattered once again. Sections of levels are assigned a difficulty rating, but that just amounts to more enemies or more frequent jumps. Many gamers could successfully play Mr. Crab and another game at the same time. The only block to completing the whole affair in one sitting is monotony. 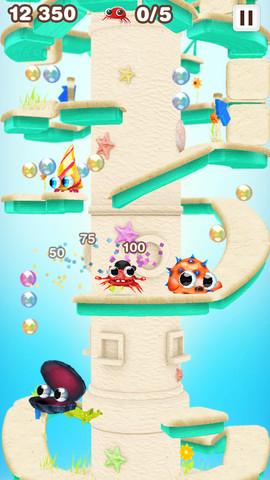 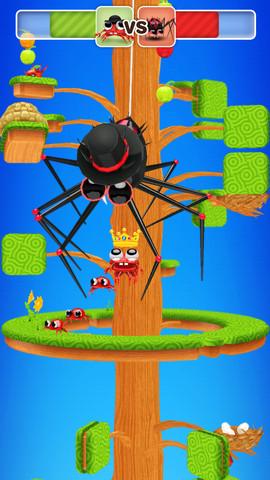 For better or worse, we’ve reached a point in mobile gaming where free can be too expensive, and Mr. Crab costs $1. The various app stores now available have made the  barrier to entry for new developers incredibly low, allowing games like Angry Birds to make their creators rich overnight, given beautiful titles like Stay Alight! a chance to shine, and presented the opportunity for low-risk ports of great games like Ms. Splosion Man. Mr. Crab is devoid of glitches, controls tightly and is well-suited to mobile play, but it does nothing above and beyond. To stand out in a sea of mobile titles, this crab needed to do more than walk sideways. Mr. Crab is the McDonald’s toy equivalent of an iPhone game, and it didn’t come free with the Happy Meal.