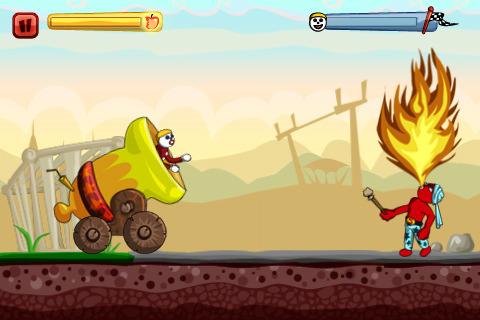 If you watched Saturday Night Live at least 25 years ago, you would have seen a low-budget comedy short called Mr. Bill. In it, our claymation hero get mushed, squished and smooshed by a mysterious hand, appropriately called Mr. Hand. He even has his catchphrase, “Oh nooooo!” Does Mr. Bill the game work well? See the catchphrase.

Mr. Bill feels like a lot of missed opportunities. The big thing about the Mr. Bill shorts was how terrible they were. Mr. Bill was hand-sculpted, had zero animation (unless a hand was actually moving him on camera), and Mr. Hand was responsible for a lot of the mayhem that befell Mr. Bill. Here, these elements are basically a veneer for a simple arcade distance measuring game.

Each stage begins with launching Mr. Bill, then tapping the screen to make him flap his arms to continue forward. Flapping depletes an energy meter, which can be refilled by nabbing various items floating in the level. Various things are out to either hurl you forward or stop you in your tracks. Get to the end of the level, and you pass. If you can collect certain items along the way or meet certain criteria, you’ll get a medal. Collect all the medals and you’ll unlock some bonus missions.

The problem is the two included scenarios (a circus and a farm) play the same. The obstacles are reskinned (crows rather than flying acrobats as obstacles, tentpoles verses fence posts to be impaled upon) but levels are differentiated by either items to collect, or simply throwing a ton of baddies at you. Later levels become a chore, balancing trying to get to the end with achieving the medal and collecting enough power for the flight.

It’s hard to know when a level is finished. While there is a meter showing you how far you have to go, Mr. Bill seems to finish about 85% along the way. You’ll spontaneously lose control of Mr. Bill, falling to the ground, only to realize that you successfully complete the level.

The main issue with the gameplay is it’s completely one-dimensional. Without any variation, power-ups or anything to keep you going, the fun quickly evaporates. This is truly a shame, because Mr. Bill has a lot to offer, with 28 levels along with the unlockable missions. The gameplay, while short lived, is fun at first. It’s just not that deep.

Mr. Bill’s pratfalls aren’t funny either. The main humor of the original is how terrible things get for Mr. Bill. Here it’s just another failed attempt, so it’s time to restart. The opportunity for funny failures here was completely ignored. In fact, you’ll only ever hear the catchphrase during the two very short exposition scenes before each scenario.

Mr. Bill had a chance to be a nostalgia-filled, funny, silly ride with multiple scenarios and great art direction. Instead we get a thoroughly average arcade distance-measurer that just so happens to feature a has-been late night character. Flutter past this one.