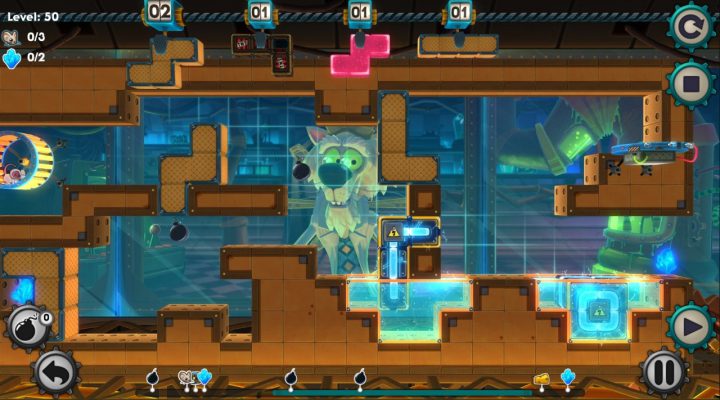 Small, accessible levels that are challenging but not punishing

My name is Schrodinger. I am a cat. I am also a scientist, conducting experiments with mice and cheese. Why? I don’t know, because on top of everything else I am quite insane as well. But it seems important. Important enough that every last one of the valuable Anima shards I collect goes toward the purchase of cheese. Because I must have cheese – more cheese – cheese for the Mousecraft machine!

That is pretty much the entirety of what passes for a story in Mousecraft, and if the game has a weakness, that would be it. The cat and the mice are reasonably cute – and for the record, the mice are more lab assistants than lab rats, and Schrodinger exhibits obvious discomfort when harm befalls them – but there’s really nothing to it beyond a paper-thin excuse to serve up 80 Lemmings-like puzzles.

(You do remember Lemmings, don’t you? Released in 1991, it challenged players to lead a horde of suicidal, green-haired pseudo-rodents through levels filled with mortal dangers. It was a huge hit, and its influence on Mousecraft is impossible to miss.) 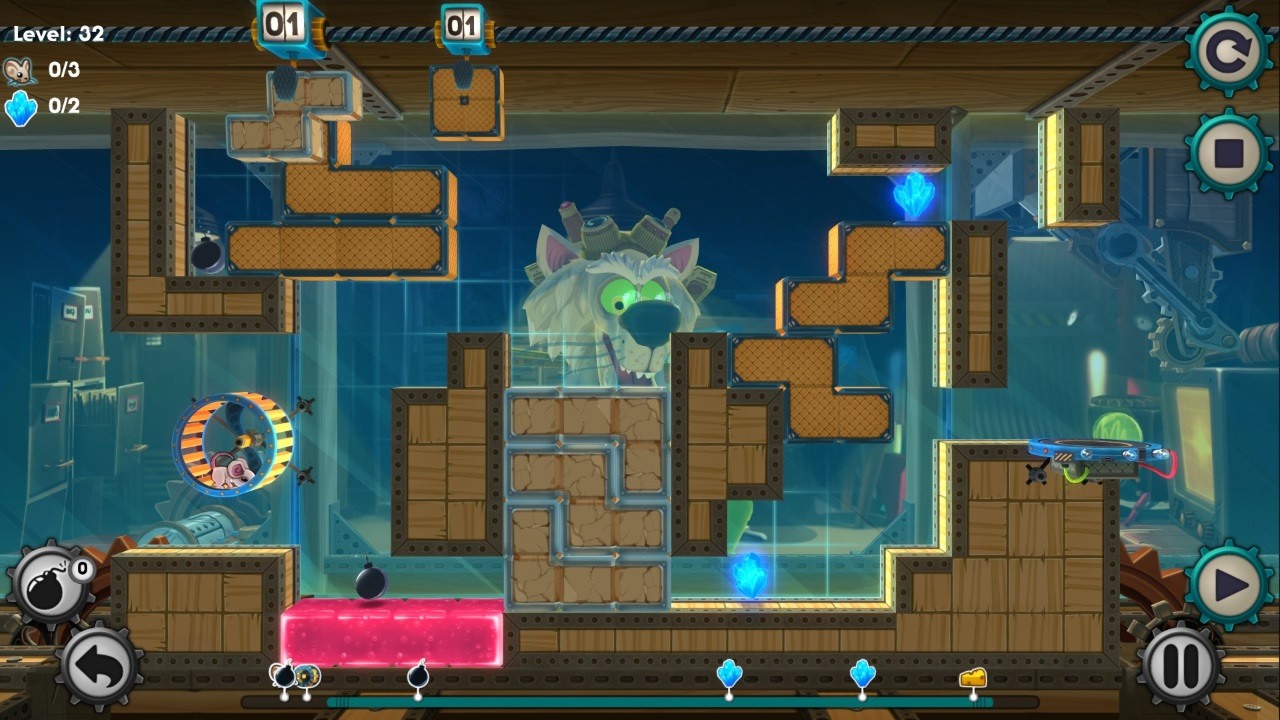 Each level in Mousecraft begins with three mice on a running wheel, who must be set loose and then guided to a plate of cheese. They don’t appear to be blind but they’re not very bright, and will slowly but surely forge straight ahead regardless of the obvious dangers, like electrified water and falls of great heights, in front of them. To get them past those obstacles, you’re given a small number of “tetronimos” – those Tetris bricks we all know and love – to place in strategic locations along their path. The mice move at a fixed pace and have very specific limits to how they climb and how far they can fall, so if you want to get them through properly, you’ll have to get it right.

The process is both helped and hindered by the different types of blocks that are introduced as the game rolls along. Some are made of clay that crumbles after it’s been stepped on twice – problematic when you’re dealing with three mice – and some are composed of a bouncy foam that protects your rodent charges from fatal falls. There are electrical blocks that will kill your mice immediately, and large blocks of dynamite that are just as deadly but also come in handy for clearing paths. And while most blocks can be destroyed by the bombs found floating around here and there, there are some that are flat-out indestructible.

New blocks are introduced at a very leisurely pace and the learning curve is fairly gentle overall. The lack of a hint feature is easily offset by the ready availability of instructional videos on YouTube, and I did take advantage of them once or twice – strictly for the sake of professional brevity, of course. In each of those cases, the solution was both simple and obvious once I’d seen it in action; Mousecraft won’t overwhelm you with complexity, but instead challenges you to find the solution within its simple, small framework.

It’s usually quite easy to get at least one or two mice to the cheese, which is all that’s required to “beat” a level and move on. The acme of success, as they say, is getting all three of them to safety while collecting all the “Anima shards” – blue crystals scattered throughout each level that add an extra dimension of difficulty. Gamers with sharp minds and dull dexterity need not worry, either: The game can be paused at any time, and pieces laid or destroyed while in pause mode, so being fleet of finger is not a requirement for success. 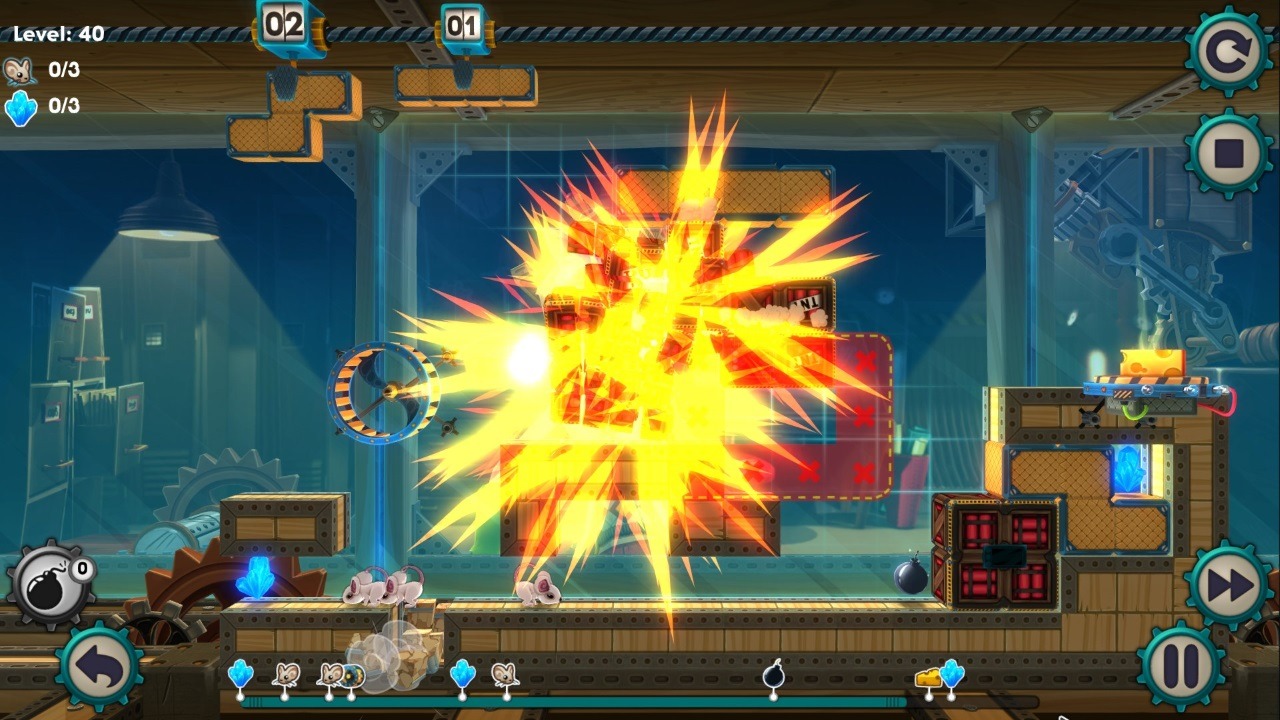 80 levels isn’t actually that many in the grand scheme of things and will probably add up to a half-dozen or so hours of play, depending on how determined you are to get a perfect score on all of them. Luckily, Mousecraft also includes a level editor that lets you create your own puzzles and then share them with the world.

The editor is actually quite easy to use, although using it well may be a different matter, but the process of sharing is currently a work in progress: Steam Workshop support is expected to be added in two or three weeks and in the meantime, a shared folder on Steam has been opened to allow owners of both the Steam and DRM-free versions of the game to manually pass around their creations. Developer Crunching Koalas hopes to be able to do the same thing with the PSN release of the game, but Sony’s onerous content moderation requirements are proving to be a real challenge for the three-man studio.

My interest in Mousecraft tended to wander over the long haul thanks to the near-complete absence of a story. Puzzle games don’t necessarily need a great narrative but I expected more from this crazy cat tale, and it was a little disappointing that there’s virtually nothing to tie it all together, or even to provide some kind of meaningful variety to the levels. But in the end, it’s all about the puzzles, and in that regard Mousecraft does a very nice job indeed. It’s well-designed and well-produced, and the inclusion of a level editor promises to keep it interesting long after the initial 80 levels are complete. I had fun with it, and I’m looking forward to more.