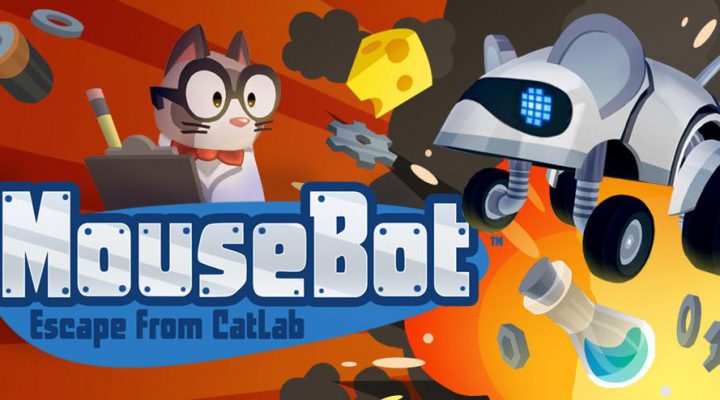 Smooth and responsive controls that make it easy to maneuver MouseBot through even tight spots.

Beautiful, colorful visuals and a great attention to detail make the levels and characters come alive.

One of the friendliest free-to-play economies we've ever seen, with plenty of lives and checkpoints, a way to skip levels, and no unwanted ads.

While they're great once you've played for awhile, the controls do take some getting used to and can feel floaty before you really master them.

The similar types of obstacles and lack of abilities for MouseBot result in pretty repetitive levels.

MouseBot is a charming shift in gears for developer Vector Unit, best known for their Riptide series of fast-paced hydrojet racers. While MouseBot initially looks and feels like a racing game as well, it lands more on the runner end of the mobile gaming spectrum, asking players to focus on dodging or jumping over dangers while the MouseBot auto-drives forward. The simplified controls work well here, providing a smooth ride through obstacle-laden levels that offer a satisfying amount of challenge, but also a few too many similar layouts.

As the subject of diabolical experiments devised by a team of cat scientists, MouseBot is tasked with finding his way through a series of ever-intensifying mazes filled with cheese and numerous traps. While the hazards threatening to break MouseBot into mechanical bits are initially just stationary mousetraps, the cats quickly up their game by introducing rotating sawblades, vertical lasers, acid pits, and even proximity mines to their anti-rodent arena. It’s the player’s job to guide MouseBot from the starting point to the end gate by swerving left or right around dangers and corners, and jumping over shorter blockages. 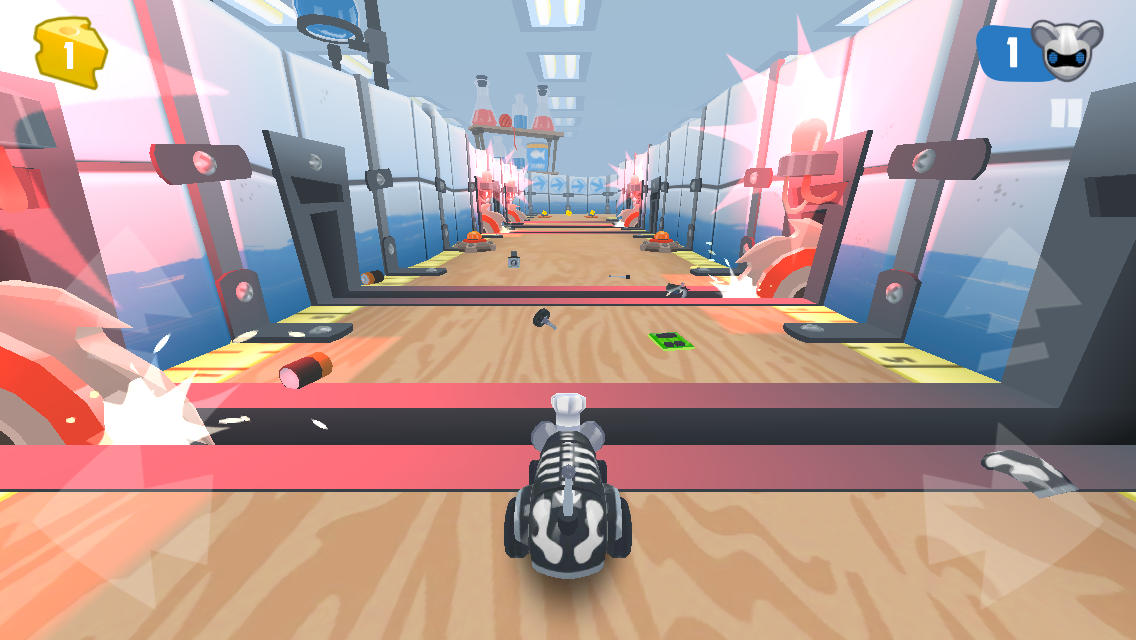 The controls in MouseBot are extremely responsive, with the slightest tap allowing for minor adjustments through tight corridors. Although MFi controllers are supported, we found ourselves preferring the touch controls since a lot of tiny movements are required to get past the always-close obstacles. MouseBot moves forward automatically at a steady pace and there’s no accelerator or brake—unless he runs into a wall or gets turned around—so you’ll spend most of your time curving around hazards. A lot of the dangers populating the mazes are also mobile, so you’ll need to time your zigs and zags just right to dodge them, as well as scouting ahead to see which side of the room will be safest in the near future. For instance, if a set of spiked mallets are stomping the ground in front of you, you’ll need to gauge which one will be up when you pass underneath and move to that same side before running into the lowered one.

Although the controls are responsive, they do take some getting used to. Since MouseBot is always moving forward, he seems to slide a bit after jumps, making mid-air adjustments crucial to prevent skidding into an obstacle upon landing. The few areas with water hazards—during which MouseBot turns his wheels into a raft—always feel a bit loose and wobbly, which seems accurate for a turbulent pool but can be frustrating when you’re trying to navigate around very prominent bombs. That said, the more we played the better we got: upon revisiting past levels after completing the game we were often able to reach the end with no deaths, leading us to feel the challenge is more in mastering the controls than in the controls themselves. The learning curve is a bit steep for such a seemingly simple setup, but it’s not impossible. 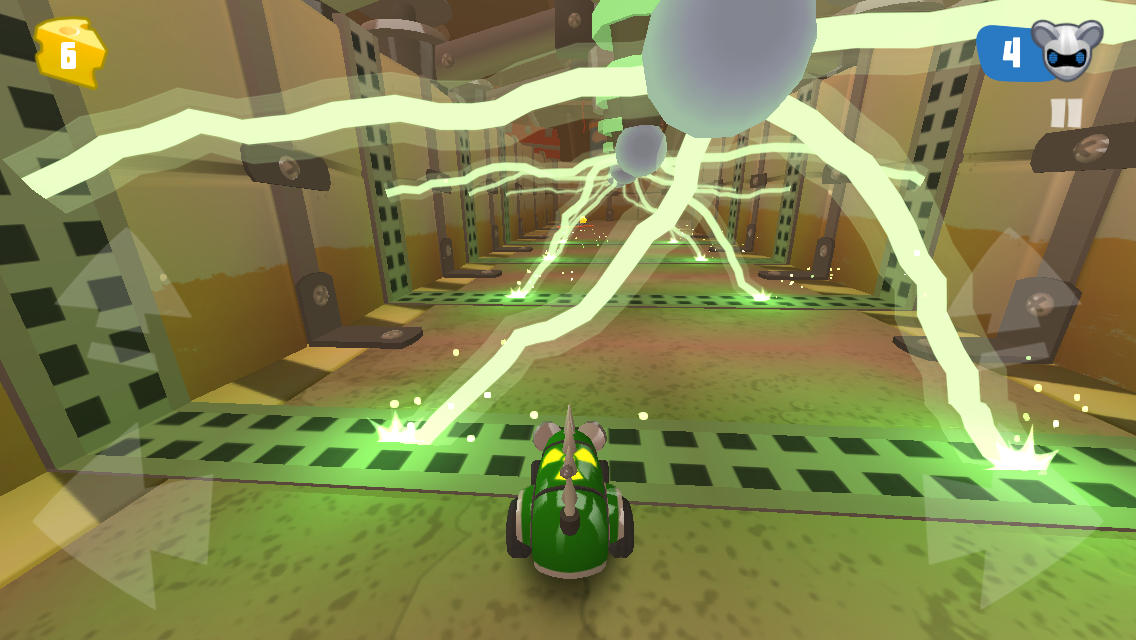 Thankfully, even on areas you’re struggling to pass or levels with especially tricky maneuvers, extra help is available. MouseBot has six lives max at any time, and if you are destroyed you will simply lose a life and restart the level. There are checkpoints after every few sets of hazards: if you spend a checkpoint coin you can activate the last one you passed and then retry from that location. Lives refill one per five minutes: alternatively, you can watch a single video ad to refill them all immediately; pay a checkpoint coin to refill them; or purchase the $2.99 IAP for permanent, infinite lives. You also have a “security pass” that you can use on any level you’ve attempted at least once, which lets you skip that level entirely. To reclaim your security pass and use it on another level, you just have to beat the stage you last used it on. All of these options are extremely player-friendly and generous, and we never felt really trapped on a level thanks to them. It also helps that checkpoint coins are doled out frequently—as rewards for completing sets of stages or meeting the cheese-collecting goal for individual levels—allowing you to use them on basically every stage without running out.

Your other reward for picking up cheeses scattered throughout the levels are unlockable hats and paint jobs for your MouseBot. These are purely aesthetic, but they’re extremely varied and beautifully applied, with paints ranging from shiny solid colors to polka dots or camouflage, and hats including wind-up gears, a chef’s toque, and flapping butterfly wings. The polish and attention to detail in the for-fun costumes are present in the entirety of MouseBot, with its colorful and gorgeous cartoonish graphics and wonderful little touches: scraps of your previously broken MouseBots remain on replayed levels; large cat scientists loom above the walls, jotting notes on their clipboards; MouseBot steers with subtle twitches of his antennae-like tail.

With its smooth controls, extremely generous monetization, and wonderfully charming polish throughout, MouseBot seemed on track to be a perfect runner-racer hybrid. What really holds it back is its level design and overreliance on the same types of hazards. To begin with, referring to stages as “mazes” is misleading: there are no alternate routes or branching paths. Every stage is essentially a straight line which contains curves in the road. There are occasionally splits in a single room, such as taking the left side with water or the right side with platforms, but otherwise no major route decision-making is required. This is a bit disappointing in a game based on lab rat maze running, and it feels like a missed opportunity for more complex stages with greater replayability.

And within these linear stages, the obstacles you come across are extremely repetitive. Although each new “world” introduces another type of hazard—world three introduces “Paw Saw” sawblades, world five adds green lasers, world eight is the first to include proximity bombs—the different dangers don’t really impact the gameplay itself. Saw blades and pendulums are just slightly different versions of the same left-to-right hazard; lasers and graters are merely horizontal obstacles that need to be jumped over; everything is either dodged or jumped, since that is all MouseBot can do. Bombs are really the only item to impact MouseBot—they knock him sideways when they explode—but like everything else, they’re still just something to avoid. 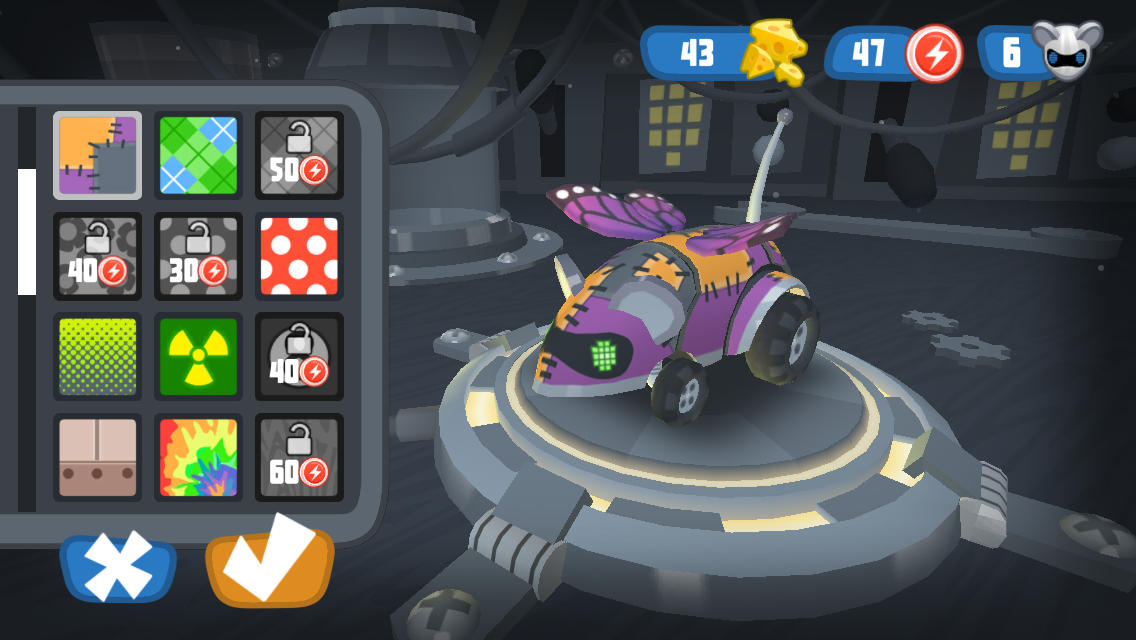 This repetition isn’t the worst issue imaginable since the core gameplay of swerving and jumping is still very engaging. But we would have liked to see more items actually affect MouseBot directly outside of killing him—such as boosters he could drive over, oil or tar to slip or slow him down, springs that give him extra bounce—since his actions are limited to begin with. Additional missions would have helped with this repetition as well: currently, all of the stages only challenge players to collect a certain number of cheeses. There are no gameplay-specific challenges, like “Beat this level without jumping,” or “Complete the stage without using checkpoints.” The result is a selection of stages that all sort of blend together, outside of their increasing number of obstacles and varying color schemes.

MouseBot is still a great addition to your runner or racing library. Its colorful aesthetics, extremely friendly economy, and difficult dodging challenges are all hugely appealing, and the entire game has been polished to a sheen by Vector Unit. We hope future updates introduce a wider variety of obstacles, layouts, and challenges, but in its current state, MouseBot is a fun arcade experience that won’t cost you any cheese.