Home / Reviews / Mountain Review: You Get Back What You Put In 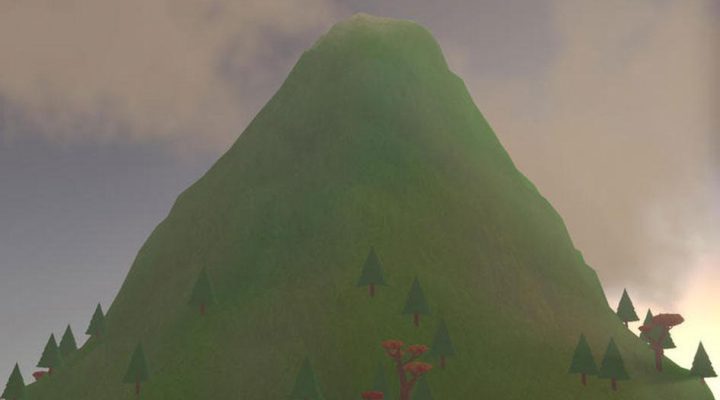 Open-ended to the furthest extreme.

Allows for many interpretations.

It's actually quite soothing.

I could honestly do without the text that pops up at all.

So, Mountain is out, and I’ve played a bit of it. And yes, I do mean play. While an awful lot of people are calling it a glorified screensaver there is interaction, just not obvious control.

That’s sort of what I like about Mountain. At the start of the game, you’re asked some almost laughably ethereal questions. Stuff like “What’s your definition of beauty?” You respond with MS Paint-style drawing, and Mountain uses the input to determine your randomly generated mountain.

Once you have your spaceborne peak you can zoom in and out, set it to spinning, tap away at piano-like keys, or just watch time pass. What you can’t do is actually progress towards any meaningful goal. The closest Mountain gets to player agency is producing a gently pulsing glow around the mountain when playing the piano notes.

It’s sort of the extreme end of the “walking simulator” genre that often gets maligned by bored forum users. Except in this case it’s a mountain simulator. You’re literally watching grass grow.

David O’Reilly, the game’s creator, is known for the “Alien Child” game in the movie Her (imagine a Peter Molyneux’s Milo Kinect demo, but a hologram and, you know, real). Paired with that knowledge, Mountain makes a lot more sense.

In Her the rude little hologram directly responded to every stimulus in a given room. It recognized the player, other voices in the room, and even images pulled up on the same computer. For all its simulated interaction, however, moviegoers are still watching a scripted, static production – something that’s the same every time. 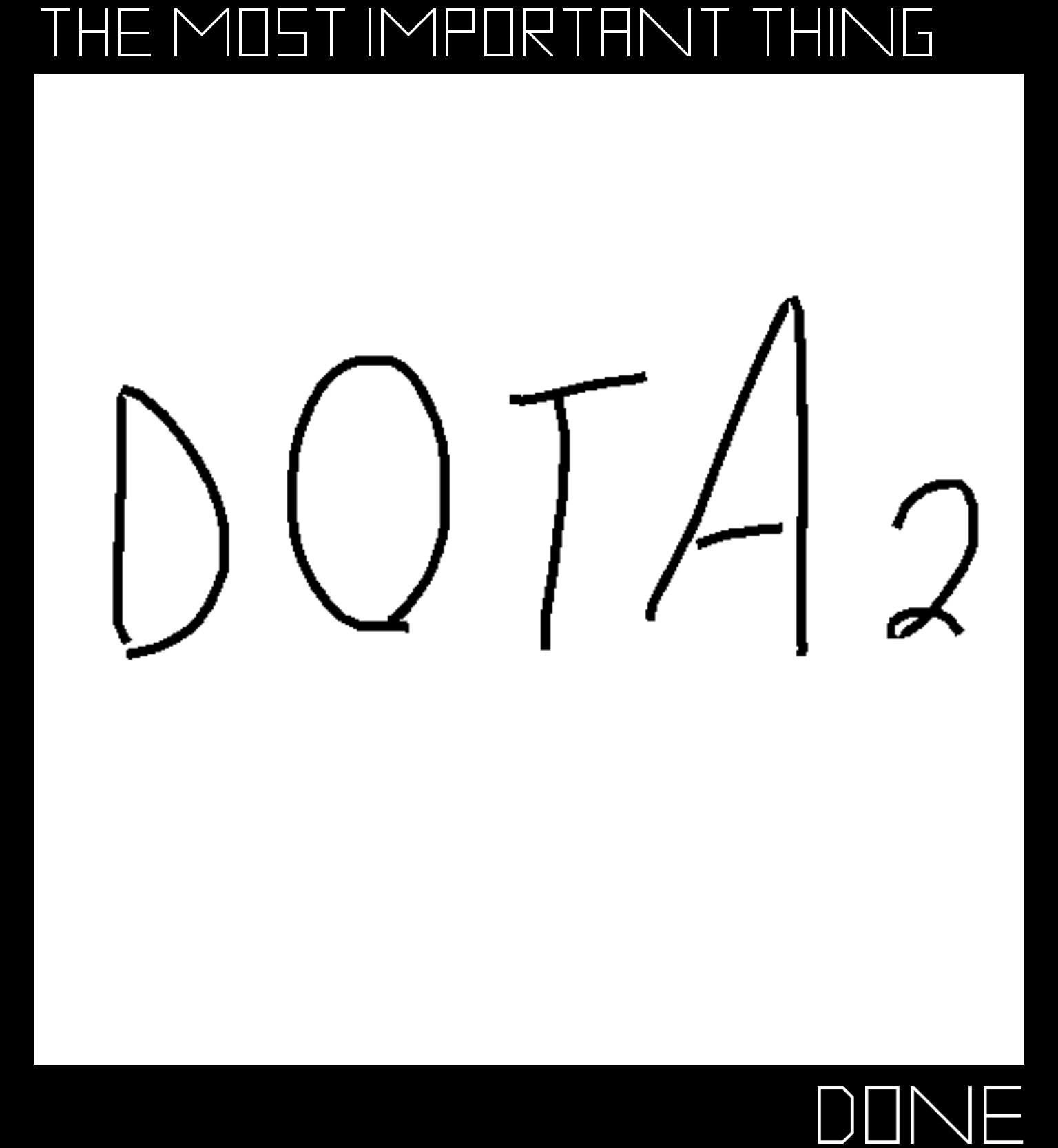 Mountain is the extreme opposite. It doesn’t “pretend” to be interactive in the slightest, and yet because it’s pseudo-randomly generated based on player input it’s a unique experience for everyone. With enough randomized variables, it potentially offers far more outcomes than decision-based games like, say, The Walking Dead.

Maybe it’s a commentary on how little we’re actually able to alter the course of our games? That’s what occurs to me, but O’Reilly seems to have a sense of humor about it.

You play as a mountain, and you get to do all of the things that a mountain does,” he said at the game’s announcement. “I’m sure that fulfills all of your darkest and most disgusting fantasies.”

Another indicator of the perhaps-not-totally-self-serious tone appears when you pause the game. You can turn audio on or off, but the controls section simply reads “nothing.”

I’ve heard there is an ending to the game, though, and that it’s apparently pretty sad. I can only imagine the mountain… dies? 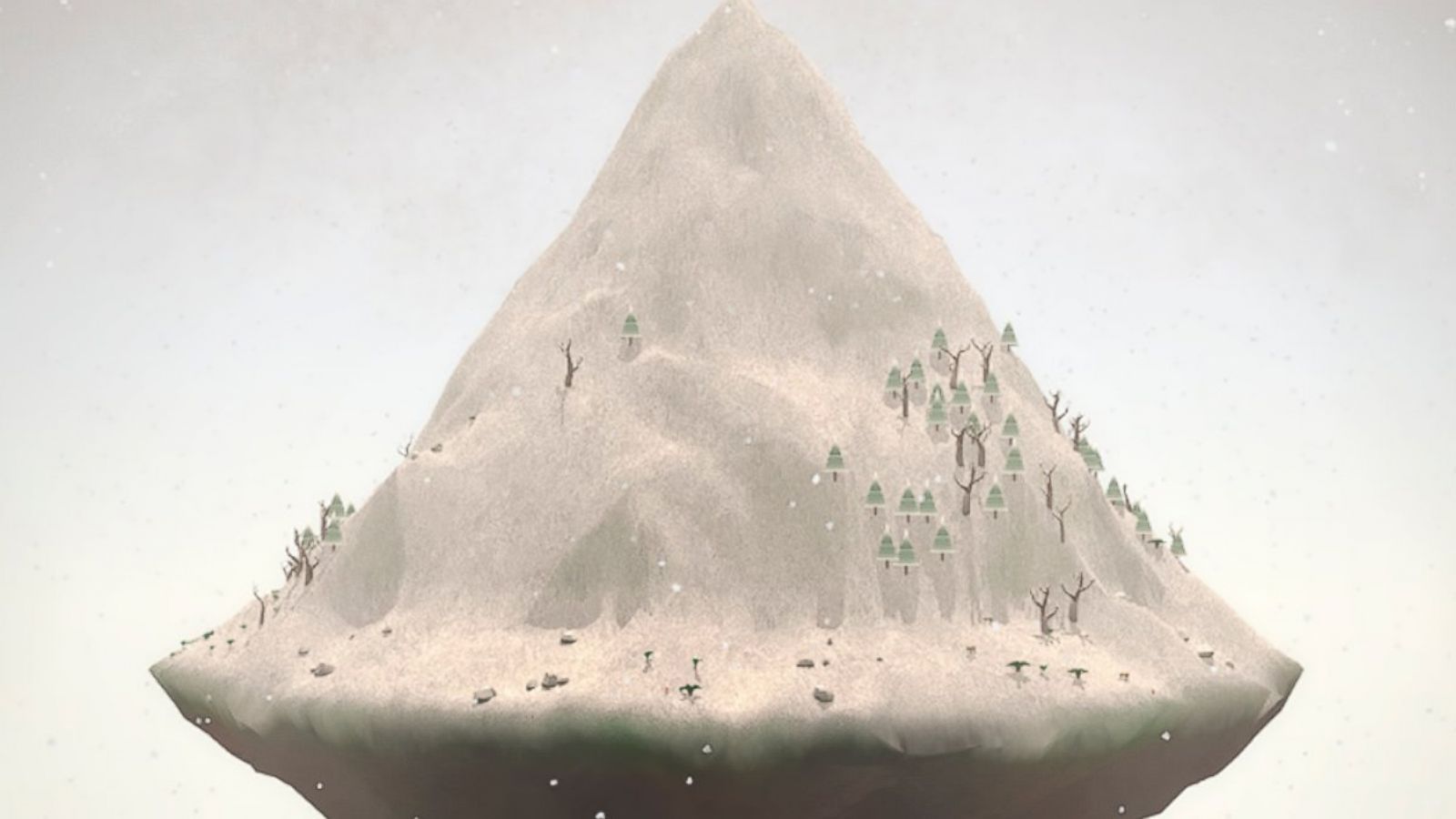 Very likely more interesting than that story, however, is who decided to pick up the publishing duties. Double Fine Productions, purveyors of fine, Kickstarted goods like Broken Age and the upcoming Massive Chalice published Mountain on iOS, PC, Mac and Linux.

This is, to my knowledge, the second game published by the developer (the first being Escape Goat 2). Remember when Double Fine was the Psychonauts company? Things have definitely taken an interesting turn for them. It’s only fitting that a game about witnessing perpetual growth should be handled by a studio with such a bizarre and winding history.

You’ll likely come away from it feeling something (confusion, perhaps), but by forsaking traditional cause-and-effect game design what you feel probably has more to do with you than the game itself.