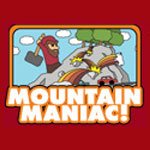 It’s been a long time since we’ve seen a game that’s about the wanton and willful destruction of a town. Normally these sort of games put you in the shoes of hulking monstrosities like King Kong or Godzilla but what about the fabled mountain man? Mountain Maniac places you in the plaid shirt and muddy boots of a hillside hobo that just wants to be left alone. Can you help him silence the town below?

Mountain Maniac feels like the backwoods offspring of pachinko and Rampage. While the old school graphics and city crushing nature of the game take me back to the good ol’ days of trashing Peoria Illonois with Lizzy the Lizard, the titular mountain man of Mountain Maniac prefers to destroy cities without getting his hands directly involved in the action. Instead of taking on buildings face-to-face, he creates massive boulders that you’ll need to control as they make their way down a plinko-inspired mountainside. Crashing into trees, cars, and cliffsides as you make your way down the mountain will help you build up your score before the boulder makes its way to the town below.

How much you destroy in the town is key here, as you’ll need to achieve a certain “percentage of city destroyed” score if you want to advance to the next one. You’ll be given five boulders to roll in an attempt to reach that score. Succeed and you’ll end up in a showdown with law enforcement officials before moving on to the next mountain. Fail and it’s game over.

There’s no doubt that Mountain Maniac is a silly good time, but it’s also a surprisingly well-designed one. Instead of just being a one-trick pony built on a wacky concept the team at Pixeljam made sure to include enough gameplay here to make Mountain Maniac an engaging experience. Control of the boulder, for example, is dependent on how much “rage” you have. Rage is the result of his much stuff you’ve smashed so far. Smash a lot, get more rage, have greater control of the boulder. Make your way down the mountain without smashing stuff, and your grip on the boulder becomes shaky at best.

While the game only includes three cities to destroy, the game loops these levels so that you can keep playing until you’ve finally run out of lives. Despite the looped nature, the target score continues to rise as the game goes on. It’s a great way to set a new challenge for players despite treading through familiar territory.

The only time Mountain Maniac began to feel like it hit a stumbling block was in the law enforcement battles between rounds. Swinging your hammer to take out hordes of enemies sounds like fun, but it really just became a chore. Each mountain had different agents to tangle with, and it really did make each of these battle feel unique – it’s just that the battles themselves didn’t really add much to the game asides from a bit of frustration. You’ll occasionally battle a yeti, and because these one-on-one encounters involve a little more than just mashing the hammer key they end up being much more fun.

Games with a pachinko vibe are always fun Peggle proved that years ago. And taking up the mantle of a cranky of man who lives in the mountains? That’s a recipe for fun right there. Sure, the short combat vignettes are far from perfect, but as an overall package we loved the over-the-top silliness and fun that Mountain Maniac had to offer. Get rolling those boulders, kids!