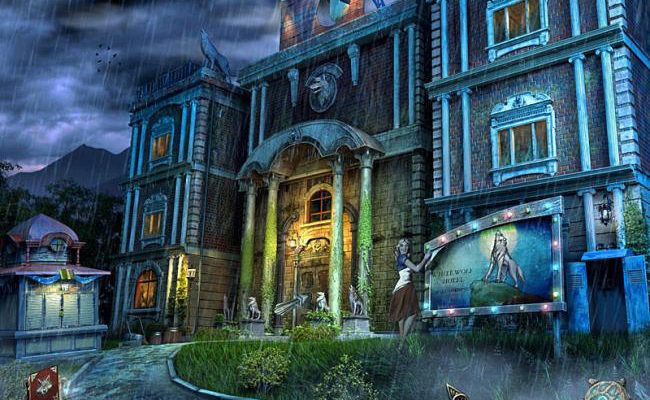 A doctor called to a newly opened mountain lodge to help a patient is drawn into a madman’s deadly game of revenge.

The game starts without preamble, as Dr. Phillip White (you) are called by a “Mr. Grey” (they were really stretching with the names here, eh?) to the White Wolf Hotel to tend to an acutely ill patient. After nearly dying (thanks to a hooded figure who points your car toward a collapsing bridge) you get to the hotel to find it totally abandoned. Well, not totally—there’s a guy dying of snake bite, a sketchy reporter type and a seemingly unhinged officer of the law who may or may not be up to something. It’s a bizarre setup for what ends up being a bizarre—and not entirely cohesive—whodunnit. 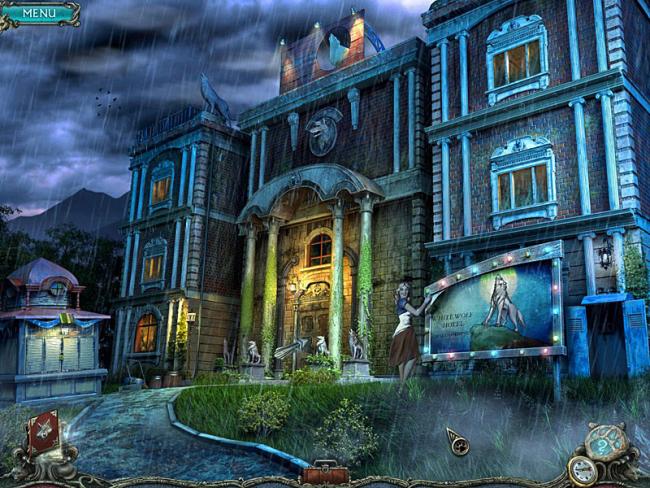 Mountain Crime: Requital (there’s the name issue again – the game’s title doesn’t exactly roll off the tongue, does it?) starts with the cliché of the crashed car and abandoned hotel and then goes on to dutifully trot out every other known hidden object banality. Locked doors? Check. Unnecessarily weird machinery missing parts? Check. Blacksmith shop where you cast an item? Check. Grates to unscrew, fountains to fill, fuses to replace? Check, check and check. While it’s true that the very nature of adventure-style exploration demands the inclusion of these things, Mountain Crime: Requital does it in a tired, cynical sort of way. It’s like you can tell the development team was merely phoning this one in.

Harsh as that is, it doesn’t imply that the game is bad. In fact, the rich, colorful graphics were obviously made by a highly competent art team and although the human characters are the stuff of nightmares (especially the sheriff – yikes!) and the scale of the characters often seems out of whack with the architecture, the overall look of the game is really good in a moody sort of way. In general, the puzzles are extremely easy and solving them won’t take experienced adventurers any time at all but the pacing of the game is good throughout. Good too is the game’s method of communicating where you are and what your current objective is. Even without your journal as reference, you always know what to do since the hero frequently says things like, “I should go out back and look for the elevator parts.” 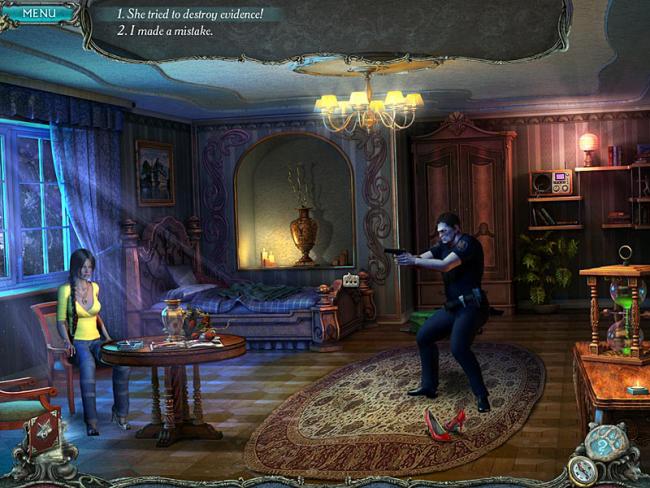 Thanks to this kind of solid design, the game offers a fairly satisfactory hidden object experience when it isn’t totally muddled by the convoluted storyline. No spoilers here, but let’s just say that the secret you’re working to uncover has to do with a wealthy businessman, a wild heiress, a shady business deal, insurance fraud, arson, a child’s sanatorium, the 1980’s, a forgotten past and a completely unlooked-for family connection. It’s far too much to squeeze into one game and even though the developers go to great lengths to explain it all, in the end you’re still likely to be left scratching your head. Worse, the actual end of the game, even with the meticulous wrap-up of the labyrinthine plotline, still manages to be abrupt and unsatisfying.

Mountain Crime: Requital is an odd duck. On one hand, it’s an expertly designed and beautifully illustrated title that’s great for players who want a reliable hidden object gaming experience. On the other, and for those of us who play a lot of games in this genre, it’s a confusing story layered on a pile of tired clichés and isn’t really worth the effort. Ultimately, your results will vary, depending on your expectations and the level of experience you have with hidden object titles.