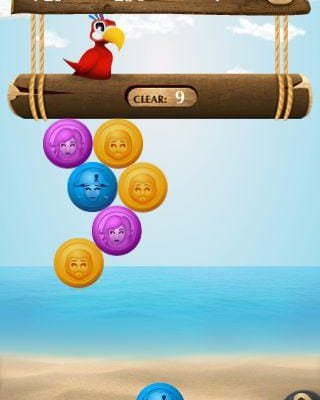 While we’re not exactly short of bubble popping Bust-a-Move clones on iPhone, Motleys attempts to mix things up by bringing a greater sense of physicality to the match-three table. Unfortunately, it needs serious fleshing out before it can be considered a real contender in the genre.

Matching coloured baubles has become so common place to your average gamer that new examples have to work doubly hard to claw their way above the routine masses. What each game needs is a successful gimmick.

Motleys‘s gimmick, then, is to create a sense that your Motleys (the name for the pirate-themed coloured discs you have to match) are physical objects rather than abstract shapes. As the piratical premise of the game sets you on a strung-up tree trunk (which constantly lowers throughout each level), this means that unsecured lines of Motleys will swing back and forth. It’s enough to make a person sea sick. 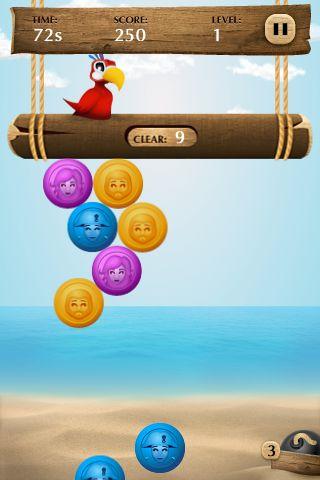 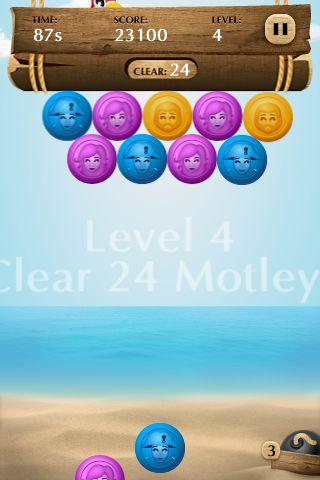 The act of pinging these Motleys up the screen, in order to match three or more of a certain colour (causing them to disappear) is also granted a pleasingly tactile feel. Having touched the active Motley at the bottom of the screen, you must then stretch your finger out in the required direction and release to fire. It feels a bit like pinging an elastic band at a work or class mate. Yes, it’s that satisfying.

It is possible to simply tap the screen to fire your Motleys, but this is disabled on the Hard difficulty level, and it’s not as satisfying to pull off as the standard mechanism anyway.

Unfortunately, the game built on top of this solid foundation is a rather threadbare one. For one thing, it looks extremely basic, with the titular Motleys rendered blandly. Unless you find the idea of coloured frisbees with various pirate faces stencilled onto them exciting, that is.

The backgrounds – or should I say background – is alarmingly simplistic, with the only offering being a sparsely appointed beach scene. It’s not merely a case of the game lacking a little eye candy either – with no differentiation between the levels, there’s no sense of progression and no variety to play.

This lack of variation is carried through to the structure of the game itself, which simply throws a string of increasingly tricky levels at you. As to work your way through, the field drops quicker and the number of matches required to move on to the next level grows in number, but the core gameplay remains unchanged. 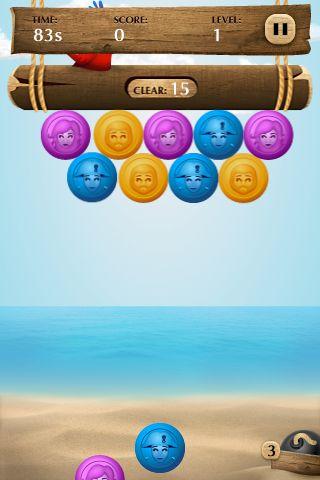 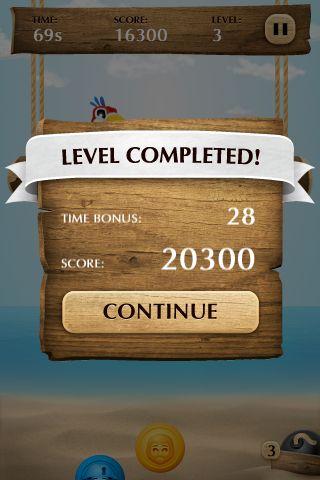 You won’t find any of its rivals’ gameplay-enhancing power-ups, either. The closest thing is a limited selection of bombs, which can be used to clear odd Motleys out of the way (any that drop away without being matched or exploded will cost you points).

On the plus side there are nine achievements to unlock, and there’s an OpenFeint-integrated Challenge mode that allows you to set a target score for your friends to beat. The latter in particular is a nice touch that might well bring you back after you’ve exhausted the main game.

Unfortunately, that won’t take too long. While Motleys is solidly built and good fun to play, it’s simply not a complete enough package to compete with the best action-puzzlers on the platform. Indeed, it feels more like an accomplished tech demo than a fully featured game.