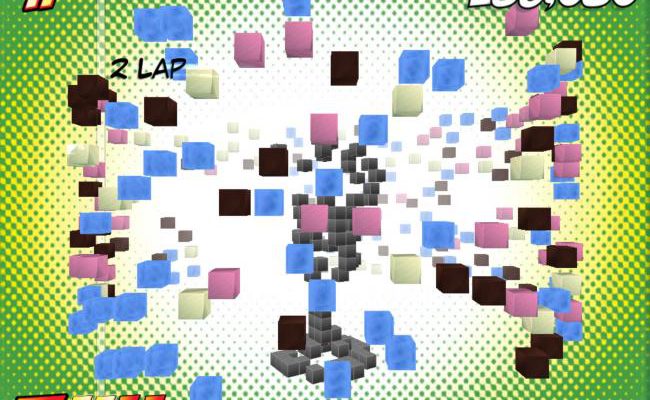 Square Enix’s new 3D puzzle game, Motley Blocks, at times seems more befitting of the arcade classification, with fast-paced action that has you madly swiping and tapping at the screen. That’s not to say the game lacks strategy. You’ll be replaying puzzles over and over to maximize your score, strategically timing the use of power-ups and multipliers to create some deceptively deep gameplay. Nevertheless, rarely is a self-titled puzzle game as hectic and frenzied as this.
The goal of the game is quite simple: touch blocks to make them disappear. Once all blocks are gone, you win. Each level begins as a 3D shape, made up of hundreds of tiny blocks. Tapping the screen begins the level and causes the blocks to explode outward, big bang style, rotating around the center of the screen. This creates a spinning 3D cylinder of colors for you to match up and eliminate. 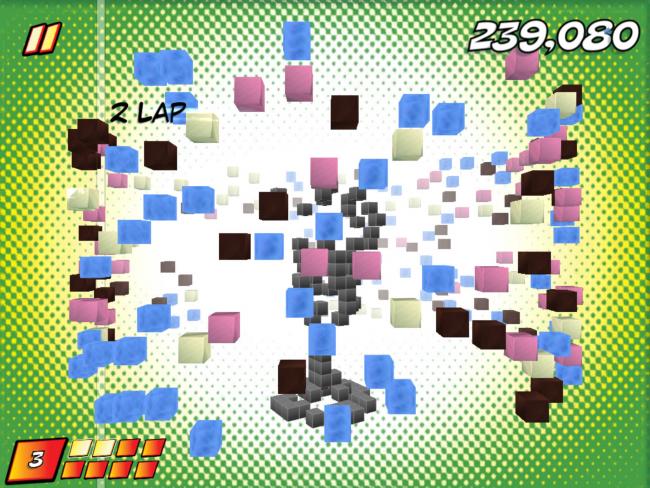 “ While simply tapping blocks makes them disappear, doing so isn’t very cost effective. See, you’re under a time limit, and rapidly tapping the screen will only make the level spin faster. Instead, you’ll need to draw lines between like-colored blocks, creating chains of color that cause big chunks of blocks to vanish off the screen at once. The more blocks you connect, the higher your score. However, touch one block of a different color mid-combo, and you break the chain and lose all your blocks.
For having such a simple premise, the game is quite frantic, causing you to pummel your screen with taps and swipes as you race to catch combos before they go spinning out of sight. The timed levels demand you to create chains, which encourages an interesting mix of greed and pragmatism, requiring you to tread the thin line between “taking what you can get” and “going for a little more.”
The number and variety of colors in which blocks come varies greatly from level to level. When only a few specific colors dominate the screen, your task becomes a bit more manageable, allowing you to create big chains due to the sheer real estate one given color takes up. When blocks are broken up sporadically across many hues, the difficulty ramps up, tasking you with weeding out low-numbered colors to open up big, linkable chunks of blocks.
The trouble with this otherwise stellar experience comes when playing on a more diminutive device. When blown up to tablet size, the game’s touch controls work well; but on a smaller screen, you may want to opt for a stylus to draw lines with more precision. There is nothing worse than chaining up a 100+ combo and losing it all because you couldn’t see that one blue block under your finger. (For a makeshift stylus, may we suggest popping a Q-tip in an old pen point, wrapping the case in foil and dabbing the tip in water? It worked well for us.) 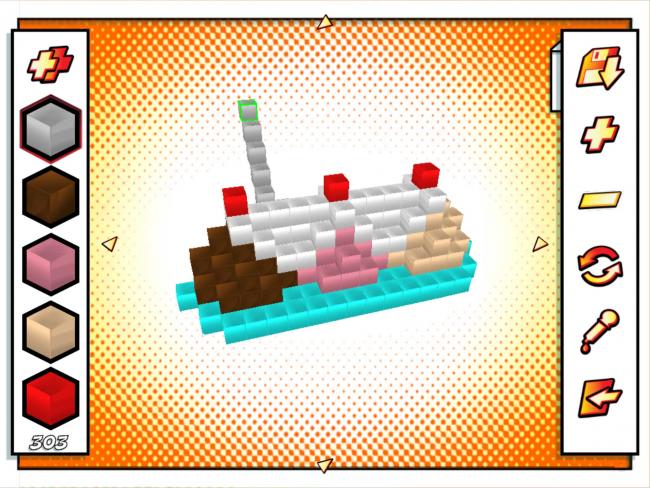 After you are through chasing high scores, you can check out the level builder, which allows you to craft your own 3D challenges and publish them to the web. Building a 3D image block by block, you choose colors and place them via simple touch screen commands. The whole experience is very user friendly, featuring pinch-to-zoom controls and a rotatable camera. To ensure you don’t publish an unplayable mess, the game makes you beat your own creation before sharing it. This sets a benchmark score for others to beat, and if your level is deemed cool enough, it becomes featured as a “daily challenge” for others to play.
The graphics are a bit minimalistic, but the bare-bones look fits the game mechanics well. If there were too many visual distractions, the already challenging gameplay would just become too hectic. Music isn’t the best it could be, with the same upbeat ska-like tunes featured throughout. Sound effects, on the other hand, are simple and actually quite helpful, climbing in pitch as your combo grows and sounding off when you hit a chain-breaking color.
All in all, Motley Blocks offers up an impressive package, with a simple yet challenging premise that tests your ability to balance speed and precision. There are loads of levels to unlock and a lot of helpful power-ups, each of which offer new ways to amend your strategy. The neat level-building mechanics make it easy to share your creativity with the community, and there is a special pride in finally beating your own challenge after five failed attempts. With both free and premium editions available, there is really no reason not to try your hand at this unique arcade puzzler.