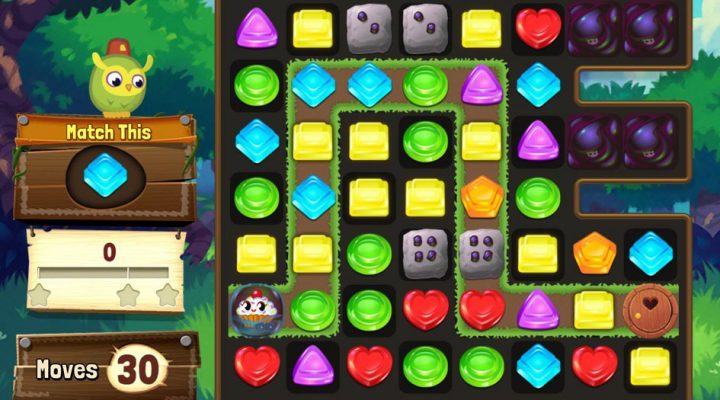 The Moshi Monsters phenomenon’s produced games, music, magazines, and even a feature film. This month Moshi Monster creators Mind Candy bring us yet another Moshi-related product—a mobile freemium match-three called Moshling Rescue!. Though the game’s clearly another way for fans and their parents to get their Moshi fix, match-three players hoping to see a new variant of the genre are likely to be disappointed.

The Moshi Monsters craze began online with a massively multiplayer game aimed at children. In it, players adopt a Moshi Monster, customize it and take care of it while also enjoying games and puzzles. In keeping with that theme, Moshling Rescue! asks players to match “gummies” in order to rescue monsters involved in various predicaments. 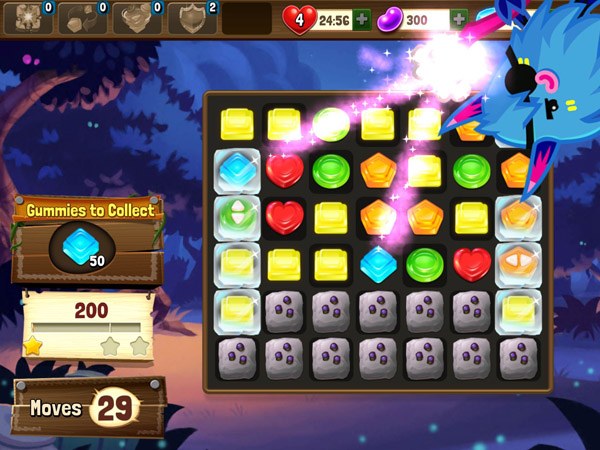 The first of these variants involves matching specific-colored gummies in order to move a Moshling from one point on the playing field to another. This sounds is pretty easy, but is made more difficult by limited moves and marauding enemies (called “Glumps). The addition of enemies to the match-three adds something of a new wrinkle to the proceedings, and evading them can become quite challenging. Failing to eliminate them quickly means they’ll eventually land on top of your monster, and then splat–game over. If the Moshlings aren’t separated from their homes by hostile Glumps, they’re trapped underground waiting for you to dig them out. Once again, matching is the method for digging through layers of dirt before your limited moves run out

Aside from the addition of cute monsters of amenable and angry varieties, Moshling Rescue! is pretty typical match-three stuff. Other familiar things appear in the form of obstacles like rocks, “gloop” and black sludge that have to be matched out of existence, and items that have to be dropped to the bottom of the playing field by matching. Powerups are also of the usual variety, and can be earned by matching four or more gummies or bought with real money. These then explode gummies in rectangles, horizontal and vertical rows or by color—just like in every other match-three game in existence.

The collection mechanic could have been something, but in the end, isn’t. Moshi Monsters fans might get a kick out of being given Moshlings upon clearing levels and making collections of them. Then again, nothing can be done with these collections. They can’t be revisited or customized or anything. Achieving them does grant you a one-time gift of jellybeans though, and these can be used to replenish your lives so I guess that’s something.

The game’s level types alternate but are fairly repetitious, though the occasional boss fight alters the pace a hair. Boss fights have you “fighting” by matching specific-colored gummies while being annoyed by an obstructive, gummy-freezing boss monster. Winning these fights isn’t especially exciting or rewarding. Along about level 30, you’re asked to match canvas bags to create crates, then match crates to create treasure chests. It’s basically the same mechanic using different icons. If you find yourself dying for something different to do, you can veer off the main level path to play a handful of side levels but those are much like everything else. 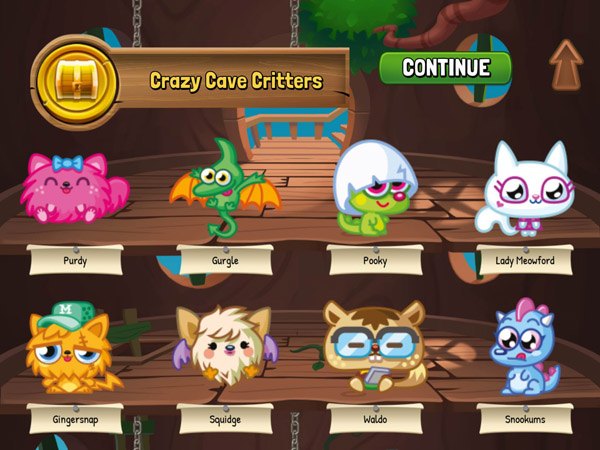 Having played through 54 levels, I feel confident I’ve more or less heard what Moshling Rescue! has to say, and I’m not all that impressed. Despite adding a somewhat interesting enemy-evasion mechanic to a traditional match-three idea, the game feels a lot like a lazy add-on meant to squeeze a few more dollars out of an already successful franchise—kind of like the app equivalent to Angry Birds beach towels. Because of that, I just can’t recommend it to anyone who’s not a complete match-three novice, younger than eight years old, or a dedicated Moshi Monsters fan.