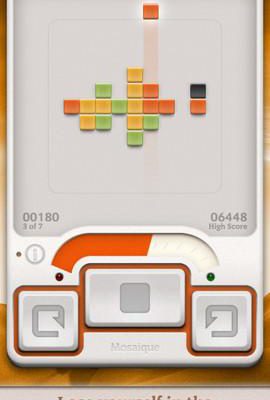 It may look like one of the now-ubiquitous minimalist iPhone weather apps, but Mosaique is more like the love child of Lumines and Echochrome than another reinvention of the thermometer. Beautiful in its simplicity, simple in its design, and satisfying in its gameplay, Mosaique checks all the boxes of a great puzzle game by being the essence of them.

Mosaique has no half-baked frame narrative to justify your solving of block puzzles. The tutorial went right over my head, so it’s a good thing that the game proper is very intuitive. The game plays out in sets of seven rounds, each more difficult than the last. The static board is filled with a set of blocks at the start of each round, and it’s up to you to remove them all. You hold one block at a time, and firing that block into a block of matching color destroys one of them. However, your block continues on until it hits either a block of different color or the wall, and the more same-shade blocks it breaks on the way, the more points for you. Since firing your current block at one of a different color only switches them out, you can set up long lines of the same color. 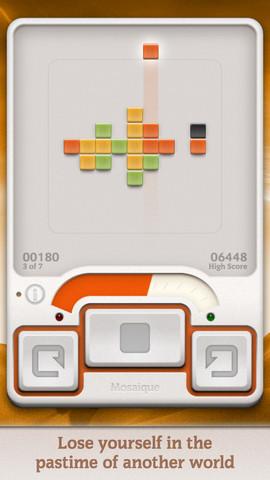 Surprisingly and vitally, Mosaique has no timer. Instead, each launching of a block depletes a meter which is persistent across each of the seven rounds. Destroying (or moving) a single block will only marginally drain you, so making long lines to take out with one shot is imperative for progress. Your meter also turns the color of whatever block you’re holding: the kind of aesthetic TLC too rarely seen in gaming. Max the meter out, and it and your current block will go psychedelic, with your next shot destroying everything in its path including the black blocks which serve as obstacles. The rainbow flashing of the meter is reminiscent of that thing in Super Metroid, and recalls a time in gaming when Mario changing colors after grabbing an invincible star was enough to make you feel awesome.

That’s all there is to Mosaique. No downloadable content or a la carte color palettes or multiplayer. You can toggle on an “expert mode,” but that’s like trying to get the achievement for speed-running Braid: it misses the point. Mosaique costs $1 and contains no trace of microtransactions. It does one thing very well and is priced accordingly. The sights and sounds are just as appealing and pleasing as the gameplay, and the colorful blocks on the off-white background are charming in their stark contrast. The music and sound effects manage to balance compelling and relaxing, and most importantly won’t compel you to insta-mute. 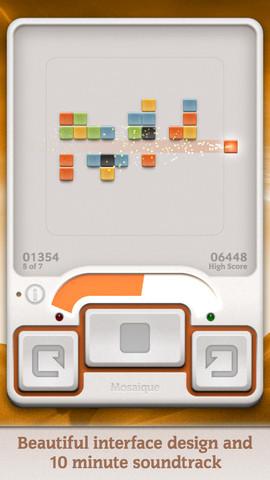 If you have fond memories of Tetris, or just like puzzle games and own an iPhone, you should pick up Mosaique. You might even be compelled to complete your seven rounds every day to unlock “hidden bonuses.” Here’s to more addition by subtraction.