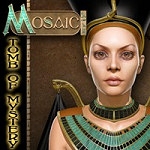 Sometimes a game comes along that redefines a certain genre. Not a re-invention per se, but a game that sets a new standard in terms of play, theme and polish. Reflexive Entertainment’s Mosaic: Tomb of Mystery has done just that for “Inlay”-style games. In the same way that driving a Porsche differs from driving a Chevy, playing Mosaic provides a gaming experience unlike any other “Inlay”-style game we’ve played before.

The basic game play should be familiar to anyone who has played a similar title (Puzzle Inlay, Magic Inlay). Geometric pieces fall from the top of the screen -into the “Drop Zone”, where you must grab and place them into larger mosaics of geometric shapes, called Glyphs.

Here, however, is where the similarities with other Inlay-style games end and Mosaic’s magic begins. Once you complete the Glyph on the screen with the smaller shapes, a story is revealed. Mosaic beckons you to discover the answer to the age-old mystery: Who was King Tut and how did he die? A history lesson as well as an interesting read, you’ll learn how Tut’s father, Ankenaten (or possibly Akhenaten), turned Egypt away from the gods, the wrath they brought upon Tut for the sins of his father, and the secret love affair between Tut’s wife and his servant. Desperate Housewives has nothing on ancient Egypt for scandal and intrigue!

In parallel to the story of Tut, you are rewarded at the end of each level with a new status in Egyptian society. This journey is both thrilling and hilarious (due to excellent writing) as you ascend from Feral Boy to Slave, to Craftsman, through the ranks of nobility to…? Yes, we’ve played the entire game all the way through, but we don’t want to kill the surprise.

Reflexive has also added some very innovative features that truly enhance the basic inlay experience, making it much more interesting than just dropping shapes on a board. These include: Fold-Outs that expand the piece placed into adjacent areas (this can be good or bad, so use them wisely); the Obelisk, rewarding quick placement with free pieces that can be placed very rapidly; and glowing Lightning Shapes that automatically fill all empty spaces in between any two lightning shapes placed on the Glyph.

The game offers several different features to help you survive until the next Glyph, making each move a strategic decision. The Crusher provides a uniquely satisfying way to dispose of unwanted pieces (hint: remember ABC = Always Be Crushing). Power-ups such as Falcons, Snake Stompers and Shape Wipeouts, are attained by placing pieces on top of the red jewels that periodically appear on the board. The pack of falcons is most intriguing, swooping in and removing unwanted pieces. These power-ups will help you survive, and making use of them will also be critical to your advancement. You don’t want to remain a Funeral Dirge Master forever, do you?

If this all sounds confusing, don’t fret. Mosaic has an excellent multimedia tutorial system and help screens to get you playing in no time. The fundamental elements of the game are very well done; the movements and controls are smooth and logical, the graphics are excellent, and the music is thematically appropriate without being obtrusive or annoying.

If there are any complaints, it’s that I found the later levels in the game a bit of a grind and, while the stories remained interesting, it would have been nice to see some new game play elements (different power-ups, different enemies, etc) added to keep things interesting as you make your way towards the end.

That said, the compelling stories are well written and interesting enough to both provide a sense of progress, and true entertainment. These, combined with terrific new power-ups, game-play elements and other surprises make Mosaic: Tomb of Mystery is a defining game in the inlay category, and one of the top casual games so far this year.