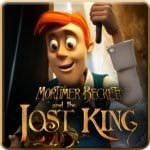 After the events of Time Paradox, Mortimer thinks he’s finally on his way home but instead he materializes in the fantasy kingdom of Zantya. The kingdom has been in decline ever since its rightful king went missing along with the jewelled crown that gave him his power, and the throne was usurped by an unsavory character named Cedric Syper. The locals ask Mortimer for help in retrieving the crown jewels and finding the king so that he can reclaim his place as ruler of the kingdom.

While the first two Mortimer Beckett games were based in the real world – albeit with healthy doses of legend and historical embellishment thrown in here and there – The Lost King is set in a world of pure fantasy. Across the game’s eight chapters you’ll encounter dwarven kings, long-bearded alchemists, flying airships, beautiful fairies, and other wondrous surprises that I don’t want to give away.

Gameplay is similar to the first two Mortimer Beckett titles in that instead of hunting for a random list of objects as in the average hidden object game, you have a specific list of inventory items to find for each chapter. This time around, though, items are whole instead of being split into several different pieces that must be found and assembled before you can use that item. Some items must be used to solve puzzles, while others must simply be returned to where they belong – such as placing a squirrel in a tree – to earn jewel pieces to fit into the crown.

Each chapter has two goals: to earn all of the jewel pieces, and to figure out how to leave the area and move on to the next. Like previous games, each area is made up of interconnected scenes that you can travel between with the help of an overhead map. Not all of the item pieces you need are confined to a single room but rather spread out across the entire area, as are puzzle solutions, so a big part of the game is making certain connections between the various places you’ve visited.

The Lost King uses a rechargeable hints system that can be counted on to give you a push in the right direction by either highlighting an item that bears closer investigation, or offering subtle clues about how specific items could be used.

You can skip The Lost King‘s cutscenes if you must, but this is one game where you would really be missing out if you did. They’re fully-animated with cinematic music and delightful voice-acting. While the cutscenes are definitely a highlight, the rest of the game holds up its end as well. The story and characters are engaging, the graphics are warm and lively, and the mini-games are challenging and well-integrated into the plot in spite of being simple variations on the usual suspects (spot-the-difference, memory matching, code deciphering, and so on).

Mortimer Beckett and The Lost King is a touch too short to get full marks (expect about four hours of gameplay if you don’t rely too heavily on the game’s generous hint system), but nevertheless it’s an enjoyable and polished ride that makes most of the other recently-released hidden object/adventure games look embarrassingly amateurish by comparison. This is one well-crafted gem that you won’t want to miss out on.