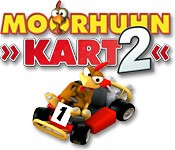 Moorhuhn Kart 2 is an arcade racer starring the crazy chicken Moorhuhn, who has appeared in more than 20 self-titled casual games spanning genres from Mah Jong to Soccer. Like Mario Kart and other similar offerings, the measure of any racing game’s worth can be found in a few basic criteria, including track design, graphics and controls, characters and environments. Let’s get to work.

In MK2, the characters are the back story. Instead of providing a scrolling narrative or a goofy announcer, the game lets you decide how two chickens, a pair of frogs, a mouse, a snowman and an anthropomorphic pumpkin find themselves at the starting line of a kart racing competition. At the onset of MK2, you can choose to play as any one of these characters, although the decision is aesthetic, as there’s no discernible difference between them.

This eclectic assortment races through eight environments, including a winter wonderland, an island, a factory, a mine, a castle, a swamp and more. While the characters are based on a generic template, each track has unique qualities that separate it from the others. For example, the winter course is more slippery than the others because of the ice that coats its roads, while the island track has water hazards that can slow you down.

The course design is one of the highlights of MK2. The curved hills that make up the first course, for instance, are almost ingenious for their ability to throw you off center. The fourth track is filled with road hazards, tight turns and shifting scenery, requiring you to let off the accelerator a bit and steer more cautiously. It’s apparent a lot of thought went into creating the courses, which are spot on in terms of length and difficulty.

As your kart travels over various surfaces, the sound effects change accordingly. You even run into trouble when you stray off course, with off-road driving being much slower than on the track.

When you load MK2 for the first time, you might be tempted to poke around for instructions, but you won’t find any. Not to worry; it took me just a few seconds to figure out the single-player controls: “up” for accelerate, “left” and “right” to turn, and “down” to brake. The Spacebar activates the current power-up, which I’ll get to in a moment. During two-player races, the second participant uses the WASD keys to steer and Shift to trigger power-ups.

Poor controls can ruin an otherwise good racing game, but that doesn’t happen in MK2. Rather, the developers ignored the notion of realistic driving mechanics and went for tight, accessible controls. That doesn’t mean you can mash the “up” key and expect to win, though. On the contrary, certain surfaces, such as ice and dirt, require more finesse, although not so much inexperienced players will find themselves slipping and sliding all over the tracks. With a little practice, even novices should be able to powerslide around corners with ease.

Visually, MK2 isn’t going to knock off socks, pop eyes or drop jaws, but the character designs are cute and the animation is respectable. At the start of a race, for example, your kart will rattle and then stall, prompting your avatar to smack the engine. Throughout the ensuing contest, your opponents will shake their fists or mouth insults at you as you pass them, adding a nice layer of interaction.

What’s more, the environments contain a decent amount of fresh scenery, with dirt roads leading onto wooden bridges and compact interiors opening up to spacious outside areas. To be sure, you’ll find a lot of variety, but not much detail. Objects are made up of blocky polygons and gaudy, low resolution textures, making MK2 look like an original Playstation game that’s been coated with lacquer.

These things shouldn’t matter, though, if MK2 is fun. To that end, each course is peppered with offensive and defensive power-ups. As you drive around a track, you’ll encounter clusters of nonspecific blocks representing one of several possible pickups. Part of the fun is never knowing what you’re going to grab. Will it be a land mine you can lay down to stop your opponents, or a rocket-propelled grenade that’ll hone in on the leader? How about a protective shield? Or a speed boost? From holes in the road to acid bombs, the power-ups add much-needed zest to MK2.

In terms of content, MK2 is split into solo and multiplayer modes. The single-player portion offers a Time Trial option and two Championship circuits, each of which consists of four tracks. You can tackle these in 50cc, 100cc and 150cc kart classes, starting with the least powerful engine and unlocking the next class up after beating both circuits. Alas, since it takes about 25 minutes to beat a circuit, MK2 feels slim on content, even with faster karts being made available as you progress. At least users have the multiplayer mode, which offers split-screen races between two rivals on the same computer.

Truth be told, if there’s a reason to buy MK2, it’s the multiplayer mode. The single-player game is rife with unbalanced elements, including opponents that are too easy and power-ups that are too punishing. It’s not uncommon to go from first to last place from a single hit, for example, and then regain the lead moments later as you slip past your opponents with ease. Against a human adversary, however, the combination of challenging tracks and cunning bonuses is a recipe for excitement.

Unfortunately, MK2 lacks enough single-player content to hold your attention for long, and the dated graphics will turn off some kart maniacs. So, even with good track design and solid controls, Moorhuhn Kart 2 falls just shy of an average rating. Grab the demo and a friend, though, and see if you enjoy the multiplayer mode enough to warrant purchasing the game.