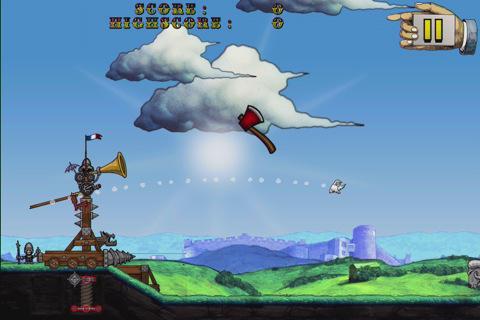 Monty Python’s Cow Tossing may be funny, but it lacks the precision needed to be an engaging Angry Birds clone

Nintendo equals Mario, Sega equals Sonic, and – for large portions of outsiders, at least – iPhone equals Angry Birds. As such, it’s not hard to imagine that business bigwigs with a big film or TV license to flog have approached mobile developers aplenty and asked them to serve up something similar, albeit with their particular franchise attached. For large portions of its play, that’s exactly what Monty Python’s Cow Tossing feels like.

So similar a proposition is this Monty Python-branded cattle flinger that it doesn’t even bother to serve up an automated tutorial of any sort. Instead, with the exception of a pictorial play guide, the game throws you straight in there assuming the language of its aerial antics are evident from the word go.

Indeed, it’s hard not to get involved. Your job is to utilise a series of animals and objects on the left of the screen to halt the advance of a gang of English knights on the right, slowly crawling towards your castle mounted on top of a variety of different siege towers.

Littered with humour throughout – the insults hurled across the battlefield by the ‘arrogant French’ towards their familiar foe – Cow Tossing certainly comes with a set up that Monty Python fans will instantly recognize. By the same token, however, it isn’t too alien to make those unfamiliar with the comedy classic feel in any way out of their depth. In fact, the superb style of the animation aside – which brilliantly mirrors the twee style of the British show – its links to the franchise are fairly loose.

Whether it’s a compliment or criticism is up for you to decide, but this could easily have been a straightforward physics puzzler without any form of license attached whatsoever.

As such, Monty Python’s Cow Tossing keeps thing simple where it can – the controls instantly familiar to anyone who has tackled Rovio’s monster hit. Once you’ve picked your ammunition from an increasingly wide selection, dragging your finger back is enough to determine both trajectory and speed, letting go causing your weapon of choice – initially what appears to be a gaggle of swans – to go hurtling towards its target.

As is custom, its path is then traced onto the screen, letting you adjust any follow up shots you take to enable a direct hit the second time around, or, if your initial aim was spot on, replicate your previous success.

Monty Python’s Cow Tossing is not afraid to mess around with the formula, however. In fact, such meddling is both the reason it’s able to stand apart from everyone’s favourite avian assault, and also the catalyst for the majority of its faults.

Most noticeable are the power ups that can change the nature of play entirely. Combining your shot with any of those on offer – the entire selection falling from a hot air balloon stationed just above your catapult – can either help or hinder your progress. Weather icons seemingly to add a touch of gusto to your attack, while flying into an old lady takes you out of play altogether. 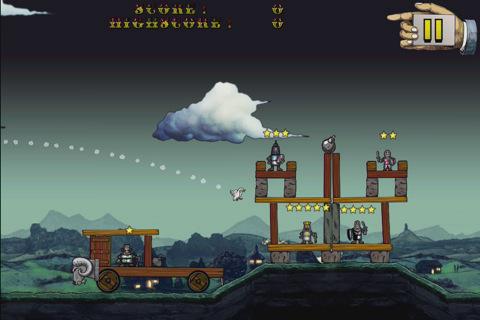 Indeed, Monty Python’s Cow Tossing has a far more explosive edge to it. Early on, taking out the increasingly large scale contraptions the English knights have constructed can be accomplished with just one lucky shot, a chain reaction of blasts clearing the board before you’ve had a chance to fathom just what you’ve done.

Even when the game gets more complicated – and, to the developer’s credit, some of the defences it contrives for its English onslaught make Angry Birds look positively conservative – rare are the shots that have little effect at all. Instead, stages look like they should be shrouded in smoke such are the number of explosions that can be instigated by a shot or two. One of the ultimate weapons – the cows that straddle the game’s name – do even further damage, darting around the screen as if having some sort of panic attack.

But it’s the seemingly random nature of Monty Python’s Cow Tossing that strips back some of its appeal. While missing the target entirely naturally comes with little reward, it’s often impossible to tell just what you did right – asides from aiming your arsenal in the general direction of your enemy – when the whole world comes crashing down around.

Angry Birds is, in comparison, something of an exact science, and by making things a touch more hectic and haphazard, Monty Python’s Cow Tossing often feels more like a game of chance than it does a game in the traditional sense.