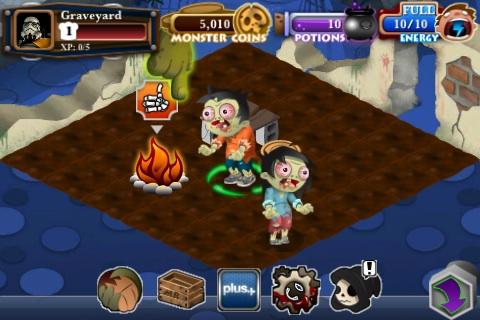 Monsterz’ Revenge serves up a disgusting dish that goes down perfectly

Did you know that monsters and fast food restaurants had a feud going on? Well, neither did we. That is, until we played Monsterz Revenge. At first blush the game is a pretty standard social experience in the Cafe World mold, where you serve food, sell food, expand your restaurant, cook some more food, rinse and repeat. But the addition of some fun, if simple, mini-games and a curiously addictive battle mode make Monsterz Revenge a much more engaging experience.

You start out with a small plot of land surrounded by a graveyard. Perfect place to build a restaurant, right? It is when your customers are ghosts and your employees are zombies. The core restaurant management gameplay is pretty familiar territory. Each type dish—which can range from smoked ribcage to sushi fingers—takes a certain amount of time to prepare, and the longer it takes the more money and experience you’ll earn. But if you don’t serve it in time the dish will go bad. Pretty standard stuff so far. You’ll be able to spend the money you earn on expanding your restaurant, adding decorations, and hiring new staff (including famous monsters like the wolfman and swamp thing).

There’s more to it than that, though. There are also mini-games to play. To start you’ll only have access to one, which involves giving Frankenstien a helpful shock by tapping on the right colored orbs. But as you hire more monsters additional mini-games will open up. And then there’s the human restaurants. The monsters (or monsterz, as the title implies) don’t just want to get revenge by creating an awesome new restaurant, they also want to destroy their enemies. And this is where the combat comes into play.

The combat itself is pretty simple, but surprisingly addictive. You have a battle car and by tapping at the right time you’ll be able to attack a restaurant by ramming into it. The restaurant owner, meanwhile, will fight back by chucking hamburgers and other fast food staples at you. Whoever runs out of energy first loses. What makes this portion of the game so addictive isn’t necessarily the simple, but fun, combat, but the way in which you can upgrade your vehicle. As you progress you’ll unlock new attacks and abilities and you can use the money you earn to purchase them and upgrade existing skills. This has the side benefit of slowly changing your car’s appearance into something much more sinister.

Monsterz Revenge is also one of the most polished mobile social games we’ve come across. From the opening cut-scene that tells the story of why the monsters need their revenge it’s clear that a lot of work has been put into how this game looks. The art style is downright charming, which is quite impressive when you consider that the game is all about horrible monsters serving disgusting dishes. From the painfully cheerful humans that will wander into your restuarant to the angry fry cooks tossing burgers your way, this is a game that’s full of ghoulish charm. 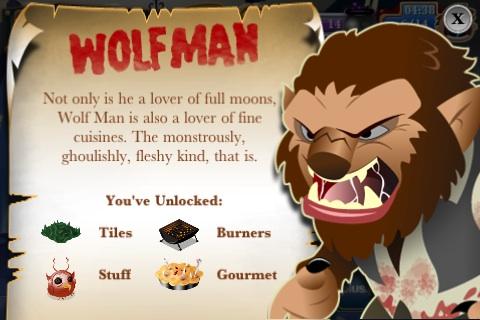 The only thing we would’ve like to have seen done different is with regards to customization. The options for decorating your restaurant are pretty slim, and since you’re spending your money on so many different things it can take quite some time to purchase new items. It also would’ve been nice if you had some control over how your attack vehicle looked. Not only do you have no say in what the new upgrades look like, you won’t even know what they look like until you purchase them, at which point there’s no going back.

But those are only minor complaints for a game that’s otherwise excellent. Monsterz Revenge takes a well worn formula and makes it interesting again with a few new gameplay modes and major focus on style. Even with the glut of social restaurant management-style games out there, it still manages to stand out. There’s so much to do in the game and, more importantly, those things are all fun. Plus, you can finally take out your anger on that darn McDonal…opps, we mean McJoint.