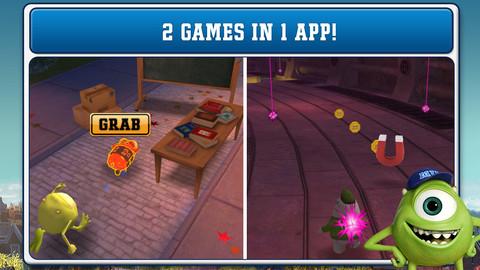 Monsters University could use a little time back in school to learn how to stand out.

Monsters Inc. and Monsters University are powerhouse Pixar licenses, so it’s not unheard of to expect bigger, better things from their tie-in products. There’s a huge budget there to draw from and plenty of source material, so why do these games more often than not turn out so bland? Monsters University, available on the iDevice of your choosing, is a by-the-book endless runner with two distinct mini-games that comprise two halves of the game.

Mike Wazowski, the lime-green and strangely lovable Cyclops any fan is familiar with is the star here, either on the run to catch up with Archie the Scare Pig or emerge victorious in a good old-fashioned race. Neither mode is particularly unique from the other – in fact, most differences are found in the aesthetic department and offer little in the way of change.

Toxicity Challenge is the first game on tap, focusing on a race challenge. You’ll swipe back and forth across the screen to get Mike to move – nothing new or unexpected here. He’s resilient, and you’ve got a decent bit of hits to take in before it’s game over. You’ll rarely find yourself restarting unless you truly can’t grasp the simple swipes. It’s a very simple game with little difficulty. Fair enough, as it’s aimed toward children, but even kids may find it a bit more forgiving than they’re used to.

Chase Archie operates in much of the same capacity as Toxicity Challenge, though near the end of the mini-game there’s a minor scene where Mike must struggle to keep hold of Archie by way of well-timed taps. Toxicity Challenge is a much more engaging exercise, as you’ll collect Scare Cards and coins along the way. Scare Cards are typical in-game pieces you’ll want to hoard, and coins enable you to purchase new monster skins, power-ups, and other items to be found within the in-game store. 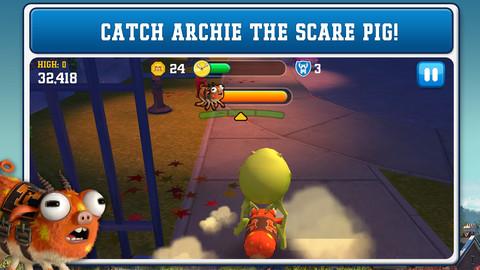 It’s all par for the course, feeling as though every tidbit was, in fact, culled from popular beacons of the endless runner universe and thrown together just in time for the excellent film. Even the music and graphics are simply passable. It’s clear who the game will end up appealing to most, and it’s certainly not the discerning iOS gamer.

Disney’s Monsters University is a disappointingly bland offering with little by way of unique and engaging gameplay or replayability. It does very little to stand out, happily sticking to the status quo for a dollop of dependable slop. There’s nothing particularly “wrong” with the app per se – you just won’t remember much about it once you’ve breezed through it once or twice.