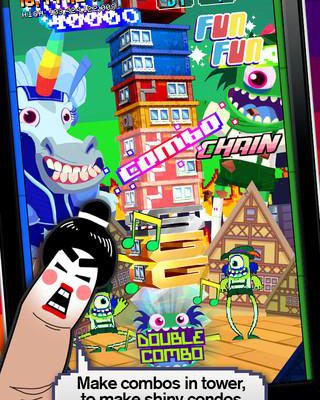 Beneath it’s silly exterior, Monsters Ate My Condo is a great rethinking of the match-3 genre

We’ve all played match-3 games before, haven’t we? But what about a match-3 game built not around swapping, but stacking? And what if that thing we were stacking was condos? Condos that we feed to hungry monsters? That, in a nutshell, is Monsters Ate My Condo. Leave it to Adult Swim Games to bring us something wonderful, yet wonderfully bizarre.

Monsters Ate My Condo is a refreshing take on the well-worn and relatively stale match-3 genre. Rather than matching items on a grid, players will watch the center of the screen slowly fill up with different floors of a condominium building. Different floors are different colors, and it’s up to you to make combos of three or more to turn them into… well, a big letter shaped condo.

To do this, you’ll slide condos out of play by swiping either left or right on individual floors. And where do these condos land? In the mouths of hungry monsters, of course! But these monsters are picky eaters, and they only want to eat condos that are the same color as they are. Feed a red condo to a red monster and you’ll make him happy. Feed a blue condo to a green monster, and he’ll get mad. If he gets mad enough, he’ll attack and try to knock down your building. If he succeeds, it’s game over.

It’s a simple premise, and yet it thinks about the match-3 game in a fundamentally different way. You’ll also need to worry about physics a bit, as sloppy swiping can lead to a wobblier tower. Other elements, like bomb condos that explode if not removed quickly, will also scatter your structure a bit. Luckily there are some bonuses to help you along your way.

Remember those letter-shaped condos I mentioned earlier? These are like awards. A “B” is for bronze, an “S” for silver, and so on. Feed these to a monster and he’ll unleash his special power. Sometimes this means your points get multiplied by 10, sometimes it means monsters won’t get angry for awhile, and sometimes – just sometimes – it means your tower straightens up and won’t fall down. Different monsters have different powers, and depending on the quality of the letter condo you feed them, those powers will be in effect for a different amount of time.

Like all Adult Swim releases, Monsters Ate My Condo is as much about presentation as it is about gameplay. The music has a silly, upbeat vibe to it, with the main menu theme offering a cheery j-pop sound to it. The j-pop makes sense, as the whole premise is clearly an homage to/parody of the Japanese monster movie genre. The monsters themselves have plenty of character (and cute little bios), and there’s even one (Reginald Starfire, a unicorn with a rainbow horn and an 80’s music career) that feels like a clear nod to another Adult Swim success, Robot Unicorn Attack. 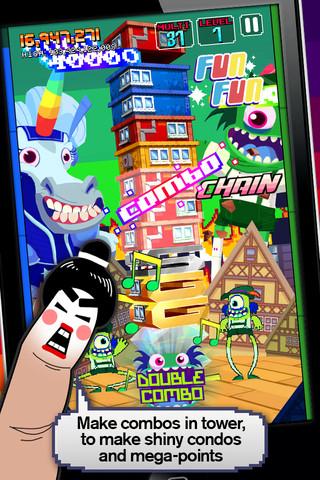 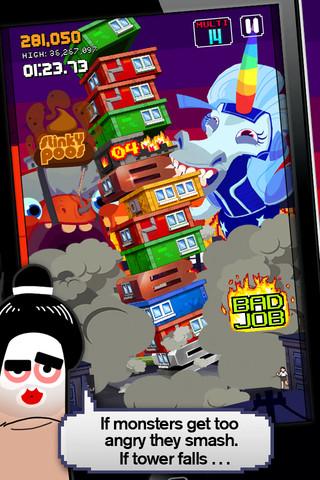 The only real complaint we have is a fairly nitpicky one – we would have liked it if the special powers had the ability to layer. It’s nice to be able to straighten my tower and get a double combo, but as things are, I can’t do both at the same time. When things get a little hectic as you survive deeper and deeper into the game, such options would definitely be appreciated.

If someone had sat me down last week and told me that I’d be pretty excited about a new match-3 game that was coming down the pipeline, I’d have been sceptical at best. But once again, Adult Swim has delivered another game that we never knew we wanted until we had it. Some people may decry the lack of variety involved (the game only offer two modes – endless and time attack), but games like this don’t need to be anything more than what they are to be a success. Now if you’ll excuse me, I have some monsters to feed.