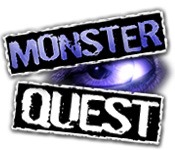 If you loved reading those 4th grade science pamphlets about the inventor of the microscope and the discovery of penicillin, you’ll find the History Channel’s Monster Quest a refreshing change from a standard hidden object game. If you like stories, you’ll like the fact that every object means something. If you prefer something more visually exciting than searching for muddy footprints in a marsh, you’ll find it boring. Former science fair enthusiasts of any age will like the game a lot.

The History Channel’s Monster Quest television program is the basis for this game. In both, the crew receives a tip about a monster sighting, anything from a werewolf to a sea monster. They start out with open minds. It might be a mistaken observation, like thinking a manatee is a mermaid. It might be a deliberate hoax. It might be an unusual creature. Or it might be something that requires further investigation.

You’ll begin, as the television crew does, with research. You have to read the case notes sent in with the sighting as well as the Monsterpedia entry on the type of creature reported. You must then (seriously) pass a pop quiz on the creature before you’ll be allowed to travel to the destination and start your investigation.

Once there, you’ll do four things. First, you’ll interview witnesses. Voice acting is very good, but you do have to listen carefully as they describe their encounters. Next you will search hidden object locations for clues as you gather evidence. The objects are almost all relevant to the story, and can provide significant clues. Once in awhile, you will have a simple inventory task to complete, like taking a picture of a skeleton or collecting a sample for further testing.

To follow along with the story, you will need to frequently refer back to your case notes, which are updated with each scene.

Also, you need to frequently return to the map to interview witnesses with additional questions or access new locations. Even if you open a new door in a scene you will need to return to the map before you can enter the next room.

Finally you will have enough evidence to run lab tests. These are a series of mini-games. Each is quite lengthy. You may assemble a jigsaw of a broken plaster casting, compare DNA structures, review photographs for differences, etc. If you find the story interesting, the mini-games will be much more compelling, as in and of themselves they are mostly a matter of very fine detail.

At the end of the lab sequence, you will have enough information to draw a conclusion about the sighting. Was it a misunderstanding? A hoax? A true observation? You will have to read several more paragraphs, then choose a conclusion.

Production values are good, but if you don’t find the story intriguing, you won’t enjoy the game-play. If you do, however, you will be very pleased with the richness of detail and the careful tying together of all the clues.

The biggest weakness of the game was the decision to only allow save points at the end of fieldwork (all hidden object scenes for a single Quest) or the end of labwork (all mini-games for that Quest). Since each Quest is quite long, with as many as five witnesses and 10 locations, we don’t understand why exiting after the seventh of 10 locations means you have to start play over from the first. If you complete an entire Quest in one session, you’ll never even notice this issue. But if you have to pause without being able to complete a phase, you may end up having to replay 20 minutes to get back to where you were last. That just seems like poor design to us.

One other minor issue is that the hidden object scenes are full of pop-up text. Some provide clues, some are just for humor. However, they flicker on and off so quickly that they are often difficult to read. These could have been better designed. Similarly some of the writing is white on grey, quite hard to read for a game so dependent on text clues. We also noticed a few spelling errors – annoying in a game based on text accuracy.

Those aspects aside, we liked the game. It took a little while to get used to going back to the map so often, but once we did, game-play went smoothly. It’s a very text-heavy game, but the text is well-written and thoroughly integrated into the story, a nice change from titles where the story barely serves as a wrapper around the game itself.

Fans of the television show on which this is based should be very pleased with its translation to a play-along game. Junior scientists of any age will enjoy the process of collecting and reviewing evidence to draw logical conclusions. Players should be able to tell from the first 30 minutes if it’s a game that they’ll enjoy. We don’t believe games have to be all things to all people. Monster Quest is an excellent example of a game that will please its target audience very well.

Natalie Brooks – The Treasures of the Lost Kingdom Review