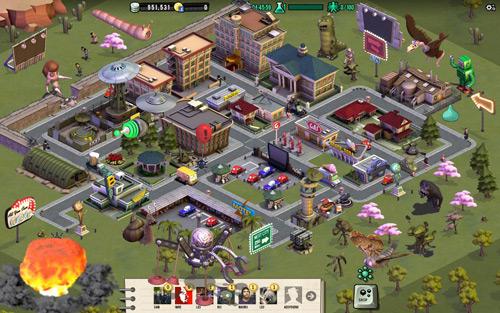 Ever wanted to trash your friends’ CityVille creations? Then Monstermind is the game for you

Let’s admit it. Even after a couple of years’ worth of innovations, the man on the street is still likely to think that gaming on Facebook consists of endless variations on FarmVille and showing off neatly planned digital creations to anyone else who happens to be playing. (That, and bugging your buddies for a flowerpot or some other trivial prop.) Bossa Studios’ Monstermind seeks to smash those assumptions, and to smash all your friends’ hard work with a rogue’s gallery of monsters in the process. It’s a stellar idea, and one that turns Facebook’s worn-out tropes on their heads at a time when they need it most.

If you’ve played CityVille and its ilk, you’ll know what to expect in the first few minutes. As with so many other social games, you’ll start out with a base of operations — in this case, a town hall — and use the ensuing levels to expand your economy and population by building houses, businesses, and roads. The difference is that, at any given time, your little village is under a constant monster watch in case one of your friends sends some giant gorilla or a hulking robot to start smashing everything you’ve just built.

For defense, then, you’ll need to build everything from barricades to missile launchers in the hopes that you can down the creature before it gets too far. All while making sure your citizens somehow find your town a nice place to live.

When you have several friends playing, it’s hard not to get addicted to this scenario. If you’re feeling devious, for instance, you can send a monster to lay waste to your friend’s town and then laugh when they try to reciprocate because you’ve built such an amazing defense system. And Monstermind encourages this sort of behavior. There’s no energy system here to limit your monstrous whims, and attacking and defending your cities are really the only ways to gaining experience aside from completing the game’s comparatively few missions. This amounts to both a plus and a minus. Unless you have at least two friends willing to share in the mayhem, you’ll likely find yourself struggling to gain experience off of anything but the well-defended NPC city. 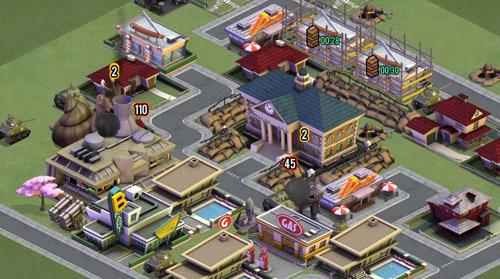 But even then, it’s hard not to get swept up into the Monstermind‘s dazzling production qualities. Almost every mission kicks off with a skippable cartoon scenario that looks like it came from a 1950s version of Dexter’s Laboratory, and each round of monster attacks features appropriately bizarre music that would be at home in any Godzilla film.

It’s all great fun, and the constant need to repair your damaged structures and design better defenses breathes new life into a genre that all too often suffers from stagnant gameplay after the first 15 or so levels. Take our advice and give this one a shot, and make sure you invite a few Facebook friends as well. We’re sure you’ll have a monster of a time.

The Cleveland Show Dance Off Review