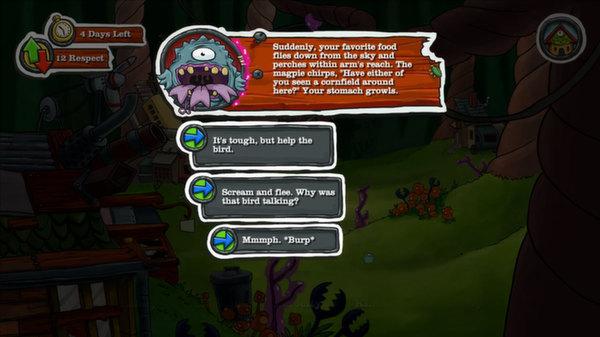 Whether Monster loves you for your brain or (delicious) body is up to you.

Monster Loves You! playfully bills itself as a monster “life simulator.”  While genres are malleable and rarely set in stone, I’d like to reclassify it right now: Monster Loves You! is a visual novel.  It’s a charming, unexpected visual novel arranged entirely around the choices you make, but a visual novel all the same.  Semantics out of the way, we can now focus on whether or not it’s a good game.  (Spoiler: it is.)

From your moment of birth as a “morsel,” Monster Loves You! requires you to make decisions regarding your monster’s personality and development, from the type of clan you are born from—active or thoughtful—to your first actions as a newborn.  Each event in your life is presented as a short narrative, which always leads to some branching choice with multiple options.  The choices you make at each stage of your life will develop your monster, potentially increasing (or decreasing) his levels of Bravery, Ferocity, Cleverness, Honesty, and Kindness, as well as the respect other monsters afford him.

These traits are used to grow your monster into worthwhile adulthood, determine his strongest capabilities, and gauge the impact he has on the world around him.  The most successful, well-rounded monsters will be given a chance to ascend to “Elder” status once they are old enough, which unlocks an influential endgame period of life.  Monsters who do not attain “Elder” status will merely return to the spawning vats that all monsters are born from, and the game starts over with a new birth.

Although the newborn morsel does little more than be spawned and potentially fight with other morsels swimming near him, each stage of monsterhood afterwards increases in complex decision-making and the number of “adventures” that your monster will go on.  As an adolescent monsterling, you will select eight different adventures to embark upon, chosen from a series of icons that only generally hint at what story point they will entail.  A picture of a drumstick, for instance, presents you with a bag of delicious rats that an Elder has brought into the cave and accidentally let free.  In this encounter, you can help him catch the rats, resulting in +15 to Kindness, or gobble up as many as possible yourself, for +15 to Ferocity.  The result of your choice, and its narrative conclusion, is displayed immediately and these stat increases (or decreases) may affect your very next encounter.  By the time you reach Elder status, your monster will have fourteen adventures available and will be making decisions that could potentially incite or prevent war between monsters and humans.

Of course, your monster will only reach Elder status if you choose this path for him, his traits are strong, and he’s lucky enough.  In addition to stat-tracking, Monster Loves You! utilizes a D&D-style dice roll on many of the more challenging decisions that become common in adulthood.  This is automatic and almost completely behind the scenes, besides an aside on certain choices—like “(Requires Bravery)”—and a quick toss of a pair of die to indicate you’ve taken a chance.  Unlike paperback “Choose Your Own Adventure” games that can be quickly rerolled or turned back to undo a poor choice, Monster Loves You! features no digital bookmarks or separate save files;  your monster must weigh and then live with the consequence of each decision he makes.  And live he shall: save one exception, there are no deaths in the game, and even dangerous, foolhardy choices will not actually harm him outside of potentially losing personality points or respect.

All of these features add up to a mostly stress-free, yet still thoughtful experience that rewards careful consideration before acting without punishing you too much for “mistakes.”  This is true both in the plentiful stat bonuses rewarded—maxing out multiple stats at 100 points is very feasible—and in the humorous narrative presented for each branch of an adventure.  A run-in with the crafty Puss in Boots is actually more comical when “failed,” as your monster spends multiple dialogue trees merely shouting “CAAAAAATS” in frustration.  Starting over and trying out diverging paths is almost as enjoyable as the first playthrough, since the adventures and their potential responses are so well-written and varied.

Note, almost as enjoyable.  Although there are a significant number of adventures available for each period of your monster’s life and no one playthrough can display them all, you’re bound to run into repeats on each new game.  On my fifth playthrough, I was still encountering new adventures—but many others I had seen on almost every game prior, and had long-since exhausted their dialogue options.  This is especially true in the intermediate stages between growth spurts—when you are first born, and in each transition to a new age, your monster will face the same narratives and adventure options time and again. 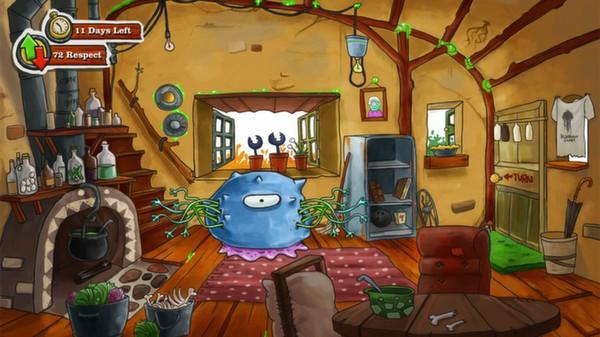 For a game that is designed to be replayed numerous times in order to see each of fourteen potential outcomes—from spurring war with the humans to becoming a monster neurosurgeon—this tedium highlights a significant issue.  Along this same fault, each playthrough is completely separate and does not affect the next, despite endings specifically calling out your contribution to the future of monsterkind.  For example, upon finishing one playthrough with a high-Kindness monster who passed away by dissolving in the spawning vat, I was awarded the “Kindness Legacy” ending, which claimed “Now your kindness is paid forward to the next generation of Monsters born from the Spawning Vat.”  However, the next monster I created did not earn a bonus to Kindness, nor did this “legacy” show itself in any fashion during the playthrough.  Although the game regularly speaks of monsters returning to the vat and continuing the cycle of life, the game itself does not recognize this nor provide any sort of reward for a well-lived monster beyond a Steam achievement.

These are issues that can be overlooked in the first few playthroughs, though, and Monster Loves You! provides enough charm in those playthroughs to justify diving into the spawning vat.  In addition to its quick snippets of narrative and conversational tone, the game is full of bits of lore.  Monsters you may meet only once in your life are described in detail, charming events like the “Spider 500” are given historical weight, and random fairy tale characters are constantly causing mischief.  Your monster’s responses to events, whether they’re moral, immoral, or somewhere in between, are almost always humorous or endearing, whether he’s shouting at Puss in Boots or devouring humans.  And perhaps that’s where the “life simulator” comes in: your creation never feels one-dimensional.  Your monster is what you make him, and like anything we give life to, that is usually lovable.