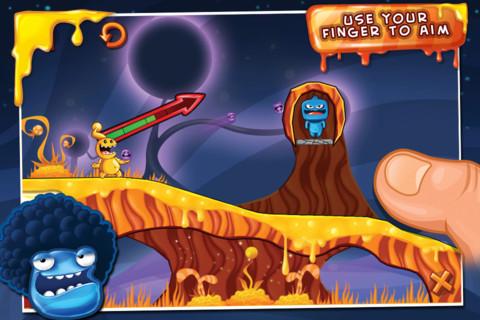 Monster Island is a great way to scare off boredom on the cheap.

Though it suffers the misfortune of a terribly unoriginal name, Monster Island is yet another worthwhile physics puzzler that offers players ample bang for their buck. There are a few bumps in the road, but if you’re looking to make a dollar stretch, look no further than this latest offering from Miniclip.

There’s no story and barely a premise here; Monster Island simply throws you right in, tasking players with tossing “minis” (monster heads) to dispatch enemy monsters. Control is straightforward, if not slightly clumsy, and the game covers the basics as you go. Monster Island offers an approachable formula that makes for solid quick-fix gaming on the go.

You play as one of several monsters, with various minis at your disposal. Some minis explode on contact, while others stick to walls or serve as mere tools to help you ferret out enemy monsters. An arrow gauge is set in front of your monster, and you can control the direction and velocity of your minis by sliding your finger on the touch screen. Once you have your shot lined up, you simply tap on the mini you’d like to toss.

Control is adequate and often satisfying, though it can also be a tad finicky when attempting to line up particularly challenging shots. The level design for almost all of the game’s many puzzles is clever and well crafted, but the physics are a bit ho-hum. Rather than present players with more playful (and perhaps less realistic) physics that might result in slightly more amusing animations, Monster Island exhibits the sort of drab movement you’d find in something like Pocket Physics, a homebrew program designed for Nintendo DS. It’s great for showing off physics experiments, but lacking in terms of entertainment.

In spite of these complaints, Monster Island still manages to be fun due to its balanced challenge and lighthearted design. Success of a given level often relies on the player’s ability to think outside the box, and the results are typically quite amusing. Without any story elements whatsoever, Monster Island conveys a delightful sense of humor. 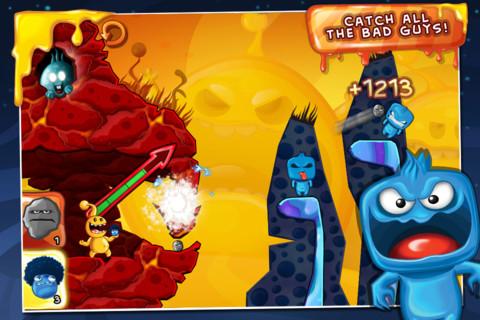 The art style, though attractive, lacks originality. Everything animates fine; the game is both colorful and cute – it just feels a bit uninspired. The music, too, is fairly cliché, and sound effects often disappear entirely; seeing explosions without sound makes for a somewhat hollow effect.

Monster Island hits a few snags here and there, but it also does many things right. The reward system encourages players to do well and spend their winnings on valuable extras. There are over 60 levels per world and currently three worlds to play through, and though the physics disappoint slightly, the level design more than makes up for it. If you’re looking for another fun puzzler to add to your app collection, Monster Island will be a dollar well spent.