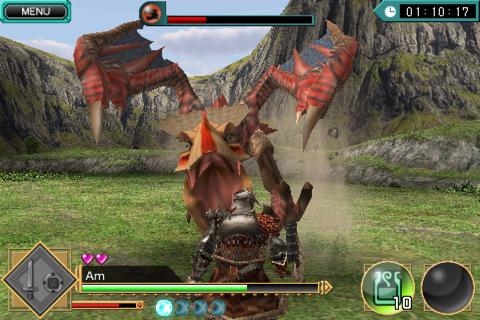 Monster Hunter Dynamic Hunting is a great portable take on the series, but it’s a little too light on content

Alongside their exceptionally successful Beeline brand of casual mobile games (Smurfs’ Village, Zombie Cafè), Capcom still churns out the occasional iOS release aimed at a more traditional Capcom audience. With mobile twists on games like Dead Rising and Devil May Cry 4 under their belts, you might have expected them to bring another straight-up port to the platform. And while Monster Hunter Dynamic Hunting may be part of their pre-existing Monster Hunter franchise, this latest portable entry is anything but a port.

Sharing a similar mythos and mentality as previous games in the series, Dynamic Hunting has players slaying giant monsters with big swords and quick moves. Every monster has their own quirks and attacks that players will need to learn, and with strong enough weapons and quick enough timing, you’ll be able to take down any beast the game throws at you.

What makes Dynamic Hunting so refreshing is that, rather than trying to cram the series existing controls onto a buttonless device, the game was clearly designed from the ground up with the touch screen in mind. Players will be able to perform different attacks by tapping and swiping in different directions. The same goes for defensive maneuvers, with two fingers bringing up your shield (if you have one equipped) and two sliding fingers causing you to evasively dive in the direction you want to go.

The control scheme is quite reminiscent of Infinity Blade, but it’s far from cookie cutter. Monster Hunter gives players a good deal more choice in their actions, allowing them to move around the environment freely, throw items like traps and grenades, and even rotate around their target to choose which side to attack. Depending on your perspective, this added complexity can be a good thing or a bad thing.

As you slay monsters, they’ll drop all sorts of items that can be used to craft new equipment. Crafting is the yin to combat’s yang in Dynamic Hunting, and provides a great carrot on a stick to keep you coming back for more. The more you play, the more crafting recipes you’ll unlock. This in turn will let you use the items you’ve collected to make new armor and weapons, and with the choice of a big sword, little sword and shield, or dual wielding weapons, there’s enough variety to keep you experimenting for awhile.

And then, just as soon as it starts, the game’s over.

Monster Hunter Dynamic Hunting only pits you up against twelve monsters. Slay a mere dozen creatures and the credits start to roll. Sure you can go back to previously completed stages and try to improve your scores or unlock new equipment, but for a game that’s about hunting in a world of endless monsters, twelve is just… anticlimactic. After only an hour, we had seen every monster you can expect to face. What’s worse, many of these twelve are simply slight variations on each other. 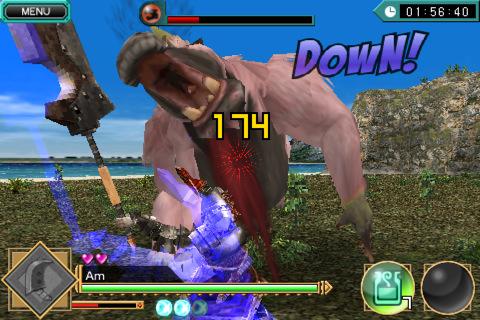 And when it comes down to it, going back to previous levels to improve your score can be surprisingly hard to do. Why? Because alongside giving out letter grades for things like speed, remaining life, and monster parts, there’s a section called “mission” that has no explanation. No matter what we did, our mission grade was always a D. This in turn brought down our overall score, never rating us any higher on a level than B. And with no clear indication of what this is charting – there’s nothing akin to a “mission” in this game – challenging yourself to an improved score is an act in frustration.

The visuals here are on par with what we’ve seen from previous Capcom releases on the App Store, which is to say impressive, and easily on par with some mid-range PlayStation 2 releases. Overall the presentation is pretty rock solid. Armor and equipment changes are reflected in your character, monsters look menacing, and the soundtrack has that perfect level of B-movie action to it.

We definitely enjoyed what Monster Hunter Dynamic Hunting had to offer – we just wish there were more of it. A dozen monsters was just enough to whet our appetites. Now we’re hungry for the main course, and the cook is nowhere to be found. Good mechanics and a simple crafting system have laid a great foundation for Monster Hunter on the iPhone. Here’s to hoping the game gets a serious update to add in the variety of monsters it so sorely needs.