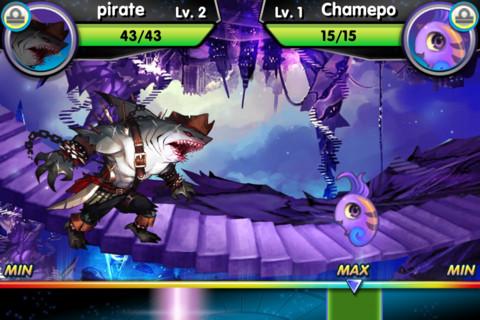 Time to train the monsters…

Over 125 different monsters to tame and train; each aligned with a specific Zodiac to give them an edge or handicap against other creatures. Beautifully rendered characters and environments that are as twisted and bizarre as they are compelling. A non-existent entry fee. Monster Galaxy: Exile certainly seems to have a lot going for it. On paper. But once the countdown timers start adding up, it begins to feel like it’s holding itself hostage.

“The world’s greatest monster tamer” (i.e. you) has dethroned King Otho (the bad guy) and saved the day. Unfortunately, Otho managed to play his “down but not out” villain card at the last second and banished you to some weird prison dimension. What follows is an adventure spanning over a dozen surreal locales, featuring an abundant cast of utterly strange characters. Believe me when I say that Broomstar, the googly-eyed “wizard” – although I think he just wears the robes for show – is only the tip of the weirdo iceberg.

Combat and capture in Monster Galaxy: Exile is the primary focus, and it employs some very easy to learn mechanics. When each battle starts players are prompted to select one of their three “equipped” monsters. After that they can decide to attack, attempt a capture, or trigger a special Zodiac ability that can hit pretty hard assuming their opponent is weak against it. Normal attacks require a well-timed tap in order to stop a moving indicator inside of a designated hit zone for boosted damage, while Zodiac moves simply task players with repeatedly tapping the inside of the symbol as quickly as possible. Capture is a bit more traditional in that Star Seeds can be used to attempt a grab without any real interaction, and naturally the weaker the enemy the better the chance for success.

As utterly bizarre as the story can be, it’s also entertaining in a special sort of way. It’s oddly reminiscent of watching one of those cartoons that utilized completely random humor; kind of like Invader Zim. Combat is similarly light where the story is lighthearted, and is incredibly easy to pick up. Thankfully it’s also been refined a bit since the previous game, using a less visually intrusive horizontal attack gauge instead of that rather garish semicircle. And the artwork, as I’ve also mentioned, is stellar both in its execution and general style. A lot of these monsters look fantastic not just because of the high-resolution illustrations, but rather because of their excellent visual designs.

Of course, as much as I love most of these monster designs, I can’t help but find myself disappointed at the lack of any real depth to the combat system that they play such a large part in. Barring the choice of monster and the Attack and Zodiac options there’s no real strategy to any given battle; no special attacks or skills to learn, no status effects to cure or pass on. It’s essentially nothing more than “attack enemy until knocked out or weakened enough to capture.” Over and over again. This in itself wouldn’t be so bad considering Monster Galaxy: Exile‘s lack of monetary investment, but the free-to-play model also manages to get in the way most of the time. Monsters can only be healed through one of three methods: leveling up, using hard-to-come-by items, or making them rest in real time. 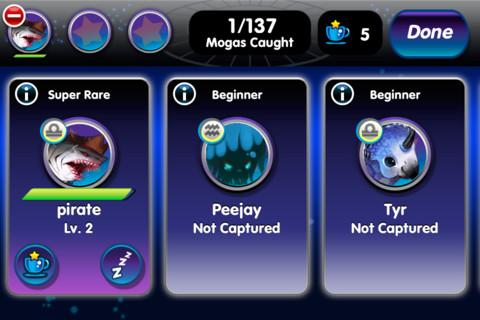 Naturally, making them rest is the most natural choice, but having to wait ten minutes or more for a heavy hitter to get back on its feet can completely disrupt the flow of a play session. This is all made even more obnoxious by some incredibly meager experience gains. Simply getting one monster in the group from level 2 to 3 can take several fights, many of which they might have to sit out for thanks to an injury.

Overall, Monster Galaxy: Exile is a decent and relatively funny freemium monster trainer. It certainly makes good use of some fantastic creature designs and more than a few memorable characters. The only problem is it tends to get in its own way half the time once monsters start to get hurt. And the simple-to-learn combat is perhaps too simple for its own good. Still, as far as iOS monster training games go, it’s a reasonable time-waster.