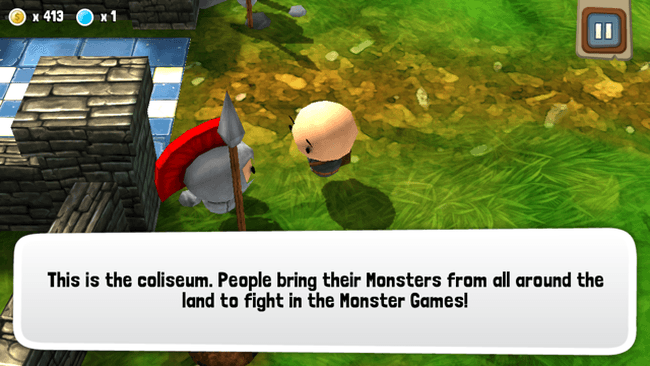 Gotta catch ’em all. And then you gotta send ’em all off into the wilderness to fight while you stay at home, because man, that junk is dangerous. Monster Adventures is a monster hunting/battling game with an admirable amount of depth and creativity. However, you need to suffer a slow start before you can really get to the rich center of this monstrous journey.

Monster Adventures begins in the manner of most monster-battling games. You’re a youngster in a backwoods town who possesses a hidden talent for getting monsters to do what you say. In fact, within minutes of starting the game, a water creature takes a shine to you and begins following you around. He’s your first “Spirit,” a mythical figure you can train to fight and capture the other monsters that roam the world.

Monster Adventures resembles Pokémon in many regards (Foursaken Media even describes the game as “Pokémon meets Zelda“), but it puts a lot more emphasis on hardscrabble, slug-it-out battles than Nintendo’s beloved collecting franchise. You can send your monster away from the safety of town to explore different environments, like plains and mountains.

From there, your monster explores the shifting terrain (yes, Monster Adventures has roguelike elements) and whacks the many “Wildlings” that come after it. Your monster is also equipped with a net, which it can use to catch Wildlings that have had their energy sufficiently depleted. When monsty returns to town, the data it’s gathered about other monsters can be used by the village elder to craft new skills for it.

Beyond exploration, there’s lots more to do in Monster Adventures. You can battle against other players’ Spirits, participate in arena matches, and collect/buy “essences,” which power up your monsters while changing their appearance.

Monster Adventures is an ambitious title, and it gets a lot of things right. The graphics are simplistic, but match the tone of the adventure, and the soundtrack is amazing. It is, however, a difficult game to get into at first. When you begin playing, you’ll probably stride out into the meadows, brimming with confidence. Prepare to get creamed.

Monster Adventures is not a gentle game. Enemy packs swarm you, and even the earliest Wildlings you battle have vicious attacks that lower your defense and leave you vulnerable. You need to build up several levels and buy essences before you can even consider taking on a boss or really delving into the depths of certain areas. And don’t even think of going anywhere near the arena until you’ve done some grinding.

Oh, and don’t die when you’re out there—true to its roguelike nature, Monster Adventures dishes out harsh penalties if you bite it in battle. 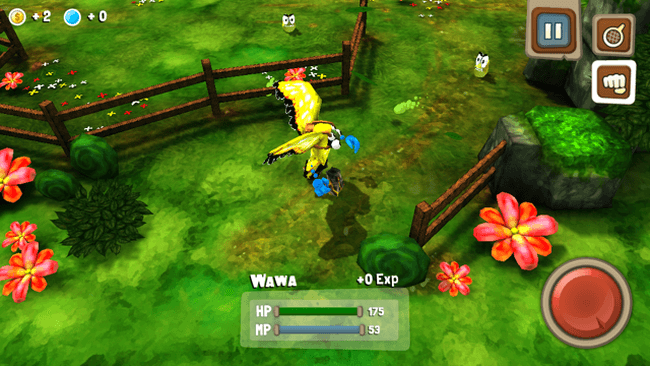 Combat feels a little loose, too. Monster Adventures utilizes a two-stick control system, with one stick moving you around while the other is used to attack. Your spirit auto-attacks the enemy closest to it, but it’s more like a flail that doesn’t always connect, even when you swear it should. There’s a bug or two, too: when things get heated, you may wind up inside a rock wall.

Despite these problems, Monster Adventures is a lovely adventure title with some big ideas. If monster collecting and roguelike adventures are your bag, this is one to tame. Just take it slow and easy at first.