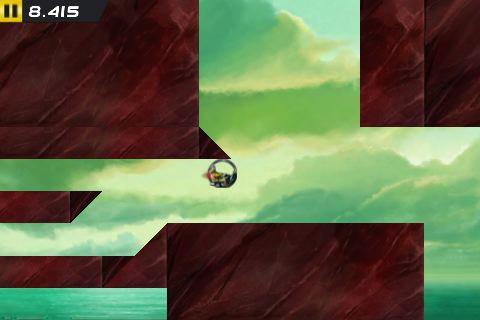 When in doubt, jump.

Two-dimensional platformers hold a special place in my heart, mainly because I’m a child of the 80’s and grew up playing them. I also played a lot of 2D racing games on my Nintendo Entertainment System when I was a kid. So when I started playing Monorace – a new racing platformer that allows player to change their personal gravity on the fly – I was actually pretty excited from the get-go. Craneballs has produced a fine title that will likely entertain anyone who’s a fan of fun.

So here’s the setup: you control one of three characters driving a “monobike” (which is basically a giant mechanical wheel) and speed through a series of levels in a race against the clock. And that’s it. Needless to say, this isn’t a game that’s particularly heavy on story or characters.

Even though there are three characters to choose from, there’s no real gameplay difference between any of them. That said, the three characters have some decent voice work and funny lines, so it doesn’t hurt to race as all of them.

Instead this is a title that is focused way more on gameplay, and Monorace manages to deliver. The basic idea is to race through a level and get to the finish line as quickly as you can. The slower you go, the lower your star rating will be when you finish, though if you go too slowly you’ll eventually hit the edge of the screen and die.

Of course, not everything along the way will hinder you. There are pads that will increase your speed, as well as clocks to capture in order to get a time bonus, but you’ll have to time your jumps carefully in order to take full advantage of all these. In many cases, precision is key for this sort of thing because mistiming a jump can result in your racer’s demise. 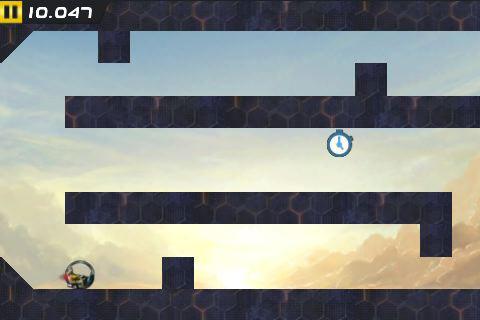 None of the levels are particularly long, but there are a lot of them (over forty, in fact) which means you aren’t likely to finish the game too quickly. There are also three different modes available for play: Beginner, Racer, and Endless. The first two modes feature different difficulty levels, while Endless’s label is pretty self-explanatory, featuring an infinite race track that is randomly generated as you go along.

Monorace’s graphics aren’t going to really wow anyone, which is a shame because the menus feature some great artwork that I would’ve loved to see reflected in the gameplay. As you race along the bland levels, there are slight appearance differences between the different drivers, but they’re such a small part of what’s actually on screen that it’s hard to make out any real details. The levels themselves, meanwhile, feature visuals so simple that they’re almost ugly. Granted, the action is so fast that this might’ve been the only way to keep the frame rate moving at an acceptable rate, so I’m hesitant to knock the game for this shortcoming.

This is a great game to play, especially when you don’t have much time on your hands. Not only is it fun to play, but it’s extremely fast-paced and most of the levels last less than a minute. While it isn’t the deepest gaming experience out there for the iPhone, it’s still a great title that most people will probably enjoy.