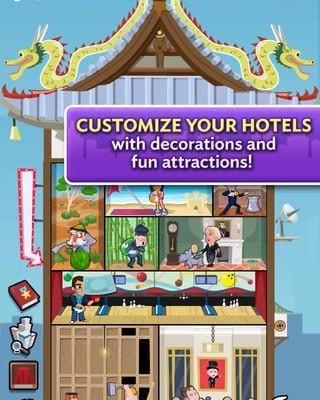 While there are plenty of hotel building games to choose from on the App Store, there are none that can match the charm that Monopoly Hotels has. Oh — and getting to build hotels on the classic properties we know and love from the cherished board game certainly helps too.

In Monopoly Hotels, you are given a hotel on a piece of relatively inexpensive property (such as Mediterranean Avenue) to prove yourself with. The structure that you’ll build the rest of the hotel in is already built, you just have to fill in the blanks with rooms, restaurants and other attractions for guests. 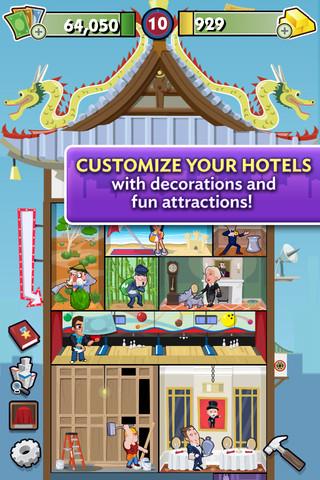 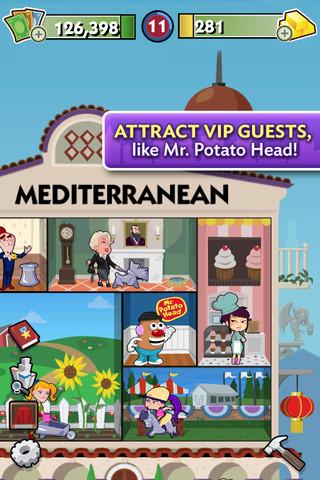 Building new amenities for your hotels is a relatively simple task, only requiring a few taps of menus on the screen and the required amount of money. Speaking of money, you earn it in Monopoly Hotels by collecting from the rooms and attractions in your hotel, but you also can get some by tapping on dollar bills that literally fall from the sky. While I would normally consider this to be a good thing, the falling money can get in your way as you’re trying to build or maintain the rest of your hotel.

Monopoly Hotels introduces a unique concept with the inclusion of the Electric Company. In regular old Monopoly, the utilities were mostly just a money trap. But here, the Electric Company actually earns you money and powers your hotels at the same time. It’s cute, but I honestly don’t really understand why this aspect even exists. Keeping the electricity flowing only requires a few taps every couple of minutes, and earns you only a little bit of money. Sure it helps, but it feels like like a fresh idea and more like an attempt to cram in as many of the classic Monopoly properties as possible. I also find it strange that you earn money when recharging the electricity. Shouldn’t it be the other way around? 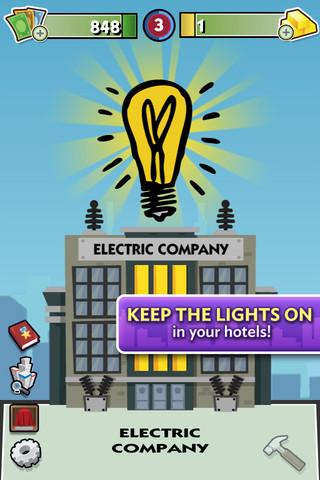 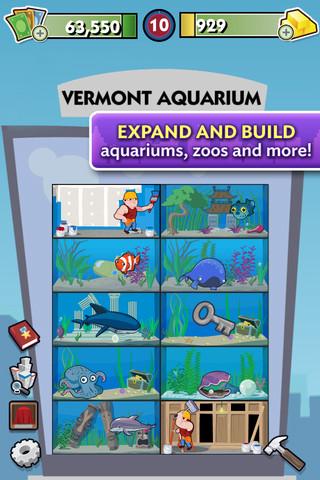 Opening new hotels is easy provided you have the money, which you can earn by playing with your existing hotels for quite a while or by shelling out real cash. Fortunately, it seems the developers haven’t made the game too hard to play for free, so there’s no real reason to pull out your wallet unless you really want a fancy Mr. Potato Head themed room. Time is a whole other ballgame however, and you may find that you’ll be waiting several days to earn the money for your next hotel.

For fans of the classic board game that everyone knows and loves, Monopoly Hotels does a good job of bringing fan service to what is otherwise a fairly mundane hotel building game. Sure, its concepts are basic and not very fresh, but the character added by its license helps out a lot here. All of the hotels have a distinct style that represents its source material well, with the Mediterranean looking like a sea-side villa and the oriental looking like it was uprooted straight from China.

Normally, I’d say to just stick with Tiny Tower when asked about tower building games, but I feel as if Monopoly Hotels has the exact amount of charm, character and content to keep you interested for the long haul.

Ball on a Wall Review