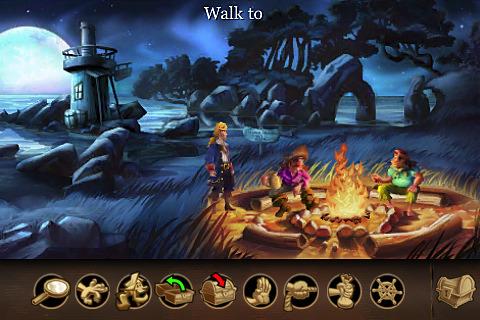 Fans of point-and-click adventures often reminisce about the old days of LucasArts. Games like Maniac Mansion and Grim Fandango have a special place in a lot of gaming hearts, but few LucasArts classics are as universally beloved as the Monkey Island series. That’s why we were so delighted when the original received a new coat of paint last year with the release of The Secret of Monkey Island: Special Edition, and why we’re even more excited that its sequel has finally received the same treatment.

Monkey Island 2 picks up shortly after the events of the original Monkey Island. Having defeated the ghost pirate LeChuck, our hero Guybrush Threepwood is off on an adventure to cement his reputation as a pirate. The time around, Threepwood is in search of the legendary treasure of Big Whoop.

In typical LucasArts fashion, Threepwood meets more than his share of comical misadventure. The first island he visits is being terrorized under the tyrannical reign of Largo LaGrande, LeChuck’s former right hand man. Through a series of hilarious puzzles involving voodoo, grave-robbing, and toupees, Threepwood manages to drive LaGrande off, only to inadvertently get the ball rolling on LeChuck’s resurrection – and that’s just the first hour of the game.

Like the previous game, Monkey Island 2 Special Edition: Le Chuck’s Revenge is a must-own title for any fans of the adventure genre. The original Monkey Island 2 is considered by many to be one of the finest works in PC gaming history, and the love and care invested in this remastered edition couldn’t be more apparent. The hand drawn character art and backgrounds, the re-imagined musical score, the introduction of voice work by actors involved with the later entries in the series – it all comes together to create an incredibly enticing package. You can even swipe two fingers to switch to the original pixel art graphics and gameplay for that old school experience. But Monkey Island 2 Special Edition isn’t just an improvement of the 1991 classic – it’s also an improvement over last year’s special edition release.

While the previous game was a great experience on the iPhone, it wasn’t without its flaws. The controls, while comfortable and functional, weren’t really as intuitive as they could have been on a touch screen. The design in Secret of Monkey Island: Special Edition attempted to recreate the mouse cursor experience, and it came across as somewhat awkward. LeChuck’s Revenge changes that, letting players simply tap in the location they want Guybrush to go.

The verb commands, like “pick up” and “open” are easier to deal with too now, occupying the lower portion of the screen all at once rather than being available from a separate menu. It’s still not perfect – we would love to see a choice wheel of verb commands pop up whenever you hold your finger down on an object or person – but it’s still light years more comfortable than what we saw in last year’s offering. 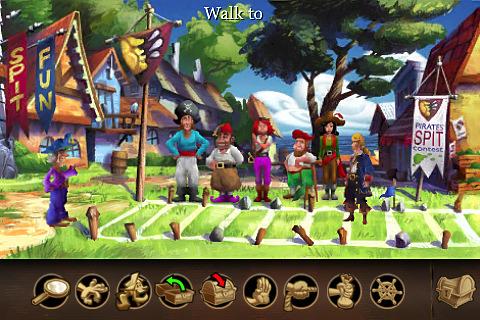 The previous game also lacked an adequate hint system. LeChuck’s Revenge corrects this by adding not one, but two ways for players to receive clues. Placing two fingers on the screen at any time will highlight all of the objects that can be interacted with – a great tool for finding that one necessary item that you didn’t realize was part of the scene. Placing three fingers on the screen will give you a series of hints on what to do next. The hints will start out vague, but if you keep putting those three fingers down you’ll get deeper and more detailed hints, eventually ending with some clear directions on what to do next.

In addition to the iPhone release this year, LucasArts has graced Apple aficionados with an iPad release of Monkey Island 2. While the game remains structurally the same, the iPad version does offer a few small perks that make it the better choice for those who have the option to pick between the two. In addition to some slightly sharper, more detailed visuals, the iPad version comes with a developer commentary track and concept art from both the 1991 and 2010 versions of the game. If you’re in any way a fan of the series, the bonus content makes this version well worth the extra two dollars. The developer commentary is especially interesting, with Ron Gilbert, Tim Schafer, and Dave Grossman discussing different aspects of characters, scenes, and design at different points in the game. Whenever they have something to say, a microphone in the top right corner appears, waiting to be clicked whenever you’re ready to listen.

With a revised control scheme and two new hint systems to help players through some of the game’s more puzzling situations, Monkey Island 2 Special Edition: LeChuck’s Revenge takes everything we loved about last year’s release and refines it to near perfection. If you’ve ever fancied yourself a fan of the point-and-click adventure, this is one pirate journey that’s worth its weight in gold.