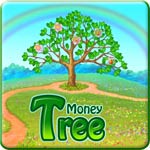 We all know money doesn’t grow on trees. Except, of course, in the frantic new mouse-masher Money Tree, where cold hard cash can literally sprout from any branch. As such, it’s quite easy to see the click-happy arcade game’s appeal, especially in a recession. (Hey, who wouldn’t want to harvest a little moolah any time of year?) Unfortunately, what’s not so simple to justify is how the outing’s worth a fistful of your hard-earned real-world dollars.

According to the admittedly throwaway tale, you play as William, a young groundskeeper for Mr. Grant, the state’s wealthiest businessman. Saddled with a crush on the tycoon’s beautiful daughter Elizabeth, but not the breeding or means to make her yours, fortune soon arrives in the form of a house and garden, which you inherit from an uncle. The grand scheme being as follows: Fix up the pad, pimp out your hedgerows and make crazy money selling the fruit you grow to win the foxy little lass’s heart. Riiiight.

OK, so it’s not exactly epic romance material, but if you think the script – told using colorful pastel comic strips and 3D character renders – is goofy, wait until you see what’s waiting on each seemingly hand-painted stage. Oddly, play itself leans towards both the monotonous and frantic, as you start by clicking on randomly falling leaves as fast as possible to add them to branches of an apple, pear, orange or cherry tree that’s just sprouting. The faster you fill branches with greenery, the quicker the plant grows, adding more shoots; increasing your money-earning potential; and eventually flowering and blossoming into produce you can collect. Assuming, that is, you wait long enough…

Given a set time limit every day, progressing to the next level simply requires collecting enough fruit to meet predefined cash minimums. (Various financial payouts are awarded for ripe, full-grown and falling pieces of fruit, as well as fruit that’s already landed on the ground, with more offered for fresher selections, natch.) Occasionally appearing dollar bills further aid in this regard, as they can also be added to branches in place of leaves and generate handy little stacks of loot upon maturing.

Though extremely slow to start, the title soon picks up steam as it adds obstacles and intricacies aplenty, e.g. vegetation-hungry caterpillars you have to click on to squish or bonus multipliers that instantly attach multiple leaves. Changing weather conditions additionally present trouble, in that you’ll have to maintain tree water and heat levels using clickable tools like sprinklers and heating lamps when rainstorms or sudden scorching conditions strike. (Fail to do so, and branches wither, requiring some serious work to resuscitate.) Thankfully, all sorts of handy items such as temporary fruit growth-inducing fertilizer or pest-killing insecticide can be picked up between stages at the local supply shop.

The problem being that the hands-on action tends to alternate between crazed episodes (i.e. when you’re desperately trying to sun a waterlogged trunk, squish bugs and collect 10 pieces of fruit at the same time) and rank tedium (e.g. as frequently happens when you’re waiting for fruit to blossom).

Snooze-inducing background music doesn’t help in this regard either, nor does a general lack of impetus pushing one forward through the tale, whether from an emotional or collectible goodies standpoint. Yes, you can occasionally deck out levels with decorations like arbors, benches and fountains. And sure, speed and green thumb bonuses are nice rewards for meeting goals quickly or successfully keeping Mother Nature in check. But really, would it have been so much to ask for a compelling narrative? Or, better yet, a fast forward button, so you could shave off half of each stage if so desired once the minimum victory requirements have been met?

All told, we don’t dislike Money Tree. It looks decent, handles relatively well, features an intriguing concept and takes a solid stab at making gardening accessible to the masses. However, unless you’re really in the mood for something particularly low-maintenance, or desperate to collect virtual currency, it’s hard to see what the real payout is here from any given standpoint. Arcade enthusiasts will find themselves occasionally entertained at best, simulation buffs wondering why the experience isn’t deeper and more involving. As for us? We’re just thankful the way to a real woman’s heart doesn’t require actually spending all day bagging Granny Smiths…