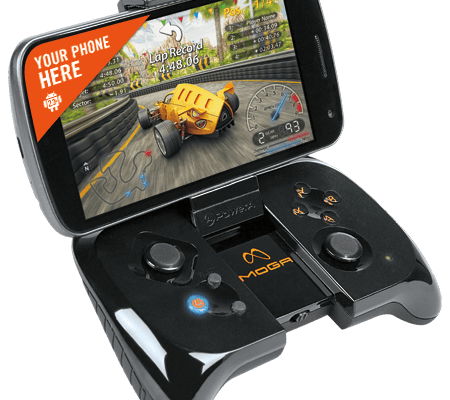 With the touch screen revolution in full swing over the last few years, it seems that swiping, tapping, and touching have become the de facto controls for gamers who like to take their fun on the go.  But what about those few stalwarts that are still holding out?  The gamers that live and die by four face buttons and an analog stick?  Well if those gamers happen to own an Android phone, MOGA is looking to fill a mighty big hole in their hearts.

A new controller available for Android smartphones this fall, MOGA features a pair of analog sticks and shoulder buttons that should feel familiar to just about any gamer that’s spent time with a living room console in the last 15 years.  MOGA’s creators aren’t trying to reinvent the wheel here – they’re just trying to put that wheel on a vehicle that normally floats on air.  It may sound like a crazy idea, but hey – even airplanes needs tires. 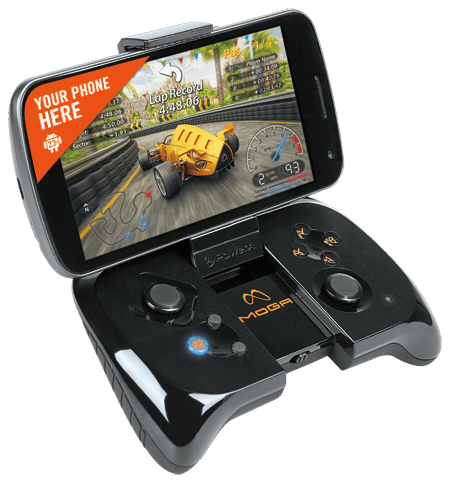 What’s the point I’m trying to make with this totally busted analogy?  That while touch controls are all well and good, there are some games that just make more sense with a controller in hand.  Case in point: any mobile game that puts fake physical controls on the screen.  If the developers feel the need to put a faux analog stick and four buttons on the screen to be touched, you may as well just use a controller if you can – and MOGA wants to be that controller.

Designed to mount an Android phone of any size snuggly into its cradle, MOGA isn’t just for phones alone. As a Bluetooth device, it can partner with Android tablets too.  And while tablets won’t actually fit onto the controller like phones will, you can always fold the cradle down, prop your tablet up somewhere, and get your game on.  We tried this with a Galaxy Tab and it worked great – or at least it did once we realized that balancing a heavy device like the Tab on the controller wasn’t just awkward, it was asinine.

The problem the MOGA faces, though, is that if you’re trying to reproduce the feeling of a console controller, you need to offer a level of comfort that’s in the same range.  MOGA simply doesn’t have that.  The device is large enough to use, but just a little too small to ever really feel comfortable in adult size hands.  And while responsive, the analog stick moves only millimeters in any direction.  It works, but it lacks the range of mobility that you might find on, say, the 3DS XL. 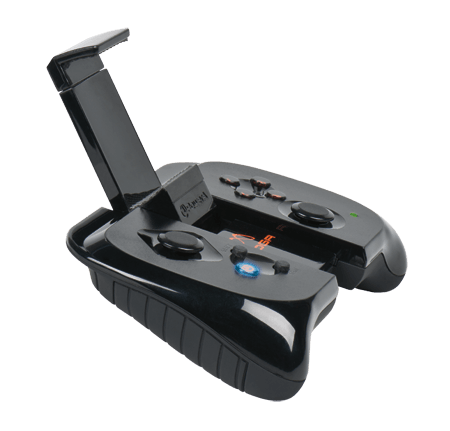 Still – what it may lack in comfort, it makes up for in responsiveness.  Everything on screen does exactly what you want it to with zero delay and zero frustration. And the list of supported games that you’ll get to experience this responsiveness with, while not terribly long, manages to impress.  Publishers like SEGA, Namco and Gameloft are all on board at launch.  Is Sonic CD your cup of tea?  What about Need for Speed?  Or Dead Trigger?  It’s all here.

Of the games I fiddled with during testing, I was most impressed with how perfectly my players pivoted left and right in Virtua Tennis. The controls were so tight that, just for a second, it felt like I was playing on my Dreamcast again.

MOGA works and it works well, but it’s just not as comfortable as we would have liked.  If you’re hankering for a console-style experience on your touch screen device, you’re going to be incredibly pleased with how well the MOGA performs.  Just don’t pick it up expecting a console-style level of comfort.  An Xbox 360 or PS3 controller, this is not.  But I’ll be damned if it isn’t fun regardless.