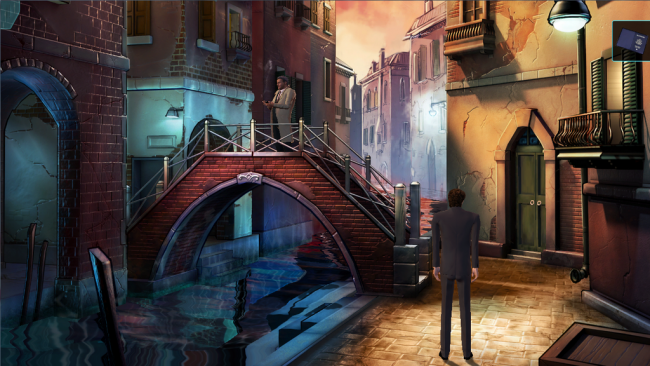 An adventure worthy of the name Jane Jensen

Moebius: Empire Rising has an impressive adventure game pedigree thanks to creator Jane Jensen’s genre-defining work at Sierra, and on the Gabriel Knight series specifically.  Her commitment to quality writing, characters, and plot in each Gabriel Knight entry opened the point-and-click adventure up to explorations of deeper, more mature subjects that have persevered through modern entries like those from Wadjet Eye.  Moebius maintains this focus on writing and story, playing out like a page-turner mystery that also happens to be filled with ingenious puzzles and challenges.

The story revolves around our protagonist, Malachi Rector, a world-renowned genius who utilizes his photographic memory and knowledge of history to appraise priceless antiques and expose fakes.  We learn early on that this is no desk job: Malachi travels the globe to meet the needs of his clients and has been sent to the hospital by some who have received less savory appraisals.

At the start of Moebius, Malachi is approached by a government agency, FITA, to investigate the death of a young woman in Venice.  He is not expected to solve the murder, but simply research the woman’s life and use his talents to decide if her biography parallels that of anyone in history.  Of course, this unique assignment becomes the gateway to a much larger mystery and conspiracy that ensnares Malachi and the player for seven chapters.

As a main character, Malachi requires warming toward.  He begins the game primarily arrogant and snooty; an unsurprising personality for a gorgeous, millionaire genius.  He’s distant and aloof, openly cold to people who obviously care about him—like his long-suffering assistant, Gretchen—and dismissive of everything from décor choices to even the player herself.  (He has a very annoyed way of saying “I don’t need” an item.)  It’s only through his unexpected pairing with the instantly charming David Walker, an ex-military hero turned interim bodyguard, that Malachi begins to open up and display empathetic human emotions.

Despite being a general curmudgeon in early chapters, Malachi is never wholly unlikeable thanks to his wit and unabashed straightforwardness.  He may need time to grow on you, but he’s always his own character, and never just the sounding board through which the developers offer guidance on puzzles.

Those puzzles are the other key component to Moebius‘s plot-driven journey, and they blend seamlessly into the story.  As a classically-inspired point-and-click adventure, Malachi will tackle many of the expected inventory item puzzles.  To stay true to the mostly logical and modern real-world setting of Moebius, Malachi doesn’t stuff his pockets with random junk.  You may recognize an item you’ll need later—why else would your hotel closet be open and contain a single, examinable wire hanger?—but you can’t pick it up until you have an actual use for it.  This does result in a lot of backtracking, but with self-contained chapters and quick teleportation at exits, return trips are a breeze.

This method of solution also creates eureka moments when you encounter the use for an item you noticed previously and thought “Catalogue that in the ol’ brain box.”  It gives the tiniest hint of role-playing as photographic memory savant Malachi, except he would never say “brain box.”

Besides this refreshing approach to item management, Moebius introduces an even more engaging and important puzzle type that is built around Malachi’s mental abilities and their role in the story itself: data analysis.  This analysis takes many forms, acting as the end-goal for some chapters—like analyzing the murdered woman and which historical figure her life matches—or merely expanding our understanding of certain characters or objects in others.  Like the current BBC Sherlock, Malachi can evaluate people by the most minute clues, from the age of their clothes to the style of their hair.  His immense databank of knowledge allows him to appraise antiques for authenticity and narrow down historical similarities to a few choices. 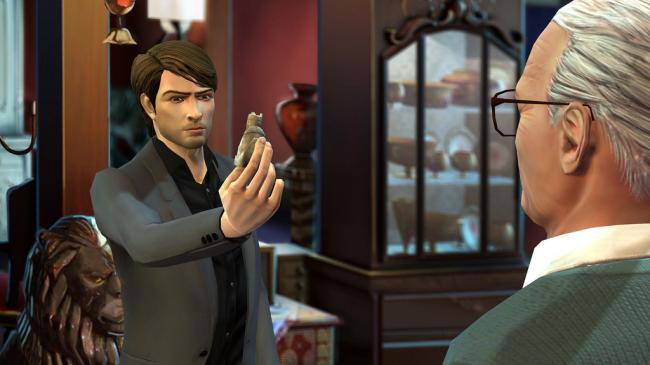 All of these mental exercises are placed in the player’s hands, requiring a keen eye and thoughtful consideration to reach the correct solution, but punishing a wrong answer only by asking you to try again.  At the same time, we’re privy to Malachi’s knowledge and a wealth of historical facts that are both fascinating and informative, expanding the scope of the game and what someone might get out of it.

This blending of historical fact with fantasy extends to the locales Malachi and David visit throughout their adventure.  Each chapter introduces a new city and subsequent locations that must be explored, from Manhattan to Cairo and half a dozen places in between.

Unfortunately, this extensive world-gallivanting often feels wasted, offering only glimpses of locations’ real-world counterparts, such as a single screen canal in Venice or a brief view of a catacomb in Paris.  Instead, Malachi’s trips focus more on interior destinations that are lavishly decorated and attractive, but which blend together and rarely recall memories of their specific city or culture.  We’re meant to be given a sense of Malachi as a world traveler, and although we are physically accompanying him on these trips, we’re bound too tightly by his assignments: as he sighs in Cairo, “Magnificent Cairo.  What a fascinating city.  Of course, the best parts of it are over there and I’m over here.” 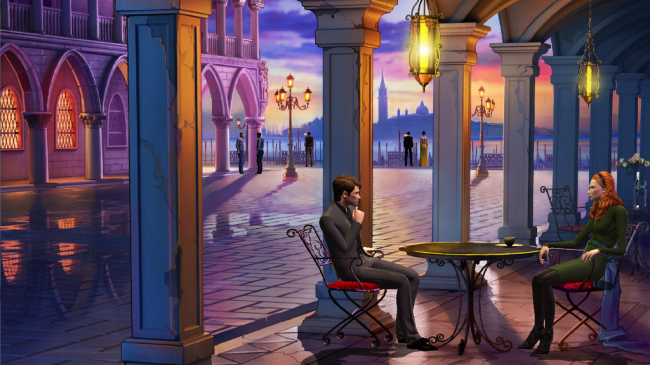 The other largest point of contention in Moebius is its final chapter, which tries its hardest to make players forget how enjoyable the rest of the game is.  With easily 10 hours of content split evenly across its seven chapters, having one stumble isn’t game-breaking.  But this final section is so tedious and disappointing that it’s difficult to overlook.  Everything that is great about the first 85% of Moebius is tossed aside: there are barely any puzzles, no character interactions, nothing to analyze, and not even any interesting interior locations.  The majority of the chapter is simply spent walking through endless corridors of bland, indistinguishably similar caves.  Finding your way through these caves isn’t even mentally taxing; it’s simply exhausting as a wasted gameplay experience.

The rest of Moebius excels in spite of this final chapter, which is worth trudging through simply to reach the touching and fulfilling end.  Unraveling the mystery Malachi has become entangled within is enough of a reward, but it is witnessing his subtle growth into something more than the sum of his haughty parts that is most gratifying.  It’s a testament to Jane Jensen’s storytelling that in a game about pseudo-scientific theories centuries in the making, multiple murders, conspiracies, and even raw fistfights, the event that most stands out is Malachi’s intangible transformation; the moment you finally root for him as your hero.