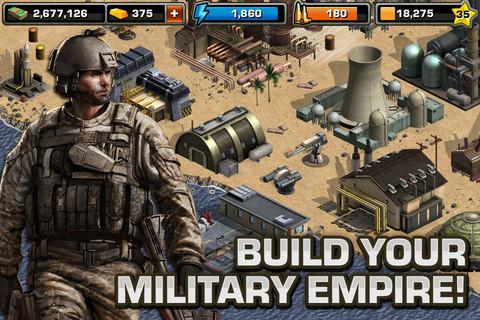 With a name that is excessively generic and a premise obviously feeding off the popularity of the gaming juggernaut that is the Call of Duty franchise, it’s surprising just how refreshing Modern War is. The gameplay will be instantly familiar to fans of games like Mafia Wars 2 and War Commander from Facebook, but the mix of contemporary combat settings and simulation/strategy make this a worthwhile pick-up-and-play option on the go.

There’s no real story here. At the outset, you’ll simply choose an avatar to command, and a forgettable military general will walk you through the fundamentals of gameplay. Like most mobile social games, this is Facebook-style gaming imported onto iPhone. You’ll require energy to complete missions, stamina to battle against fellow community members, and there’s a focus on building up your base in order to earn cash and unlock new troops. The formula isn’t new, but Modern War does a bang-up job catering to its target audience with its presentation and gameplay progression.

Similar to a typical Facebook adventure, missions will pop up on the left side of your screen. The menu system is streamlined, allowing players to go directly to their mission location without the hassle of sifting through extraneous pop-up screens. Mission variety is comprised of everything from assassinations and demolitions to rescues and all-out warfare.

In execution you’re still just clicking on objects to carry out portions of your mission, but here too, the system is smartly designed. Since the sprites are pretty tiny on the iPhone screen, you’ll first need to tap on the object you want to interact with and then tap on it again to confirm an action. It’s a minor detail that helps sidestep significant frustration.

As you carry out your missions, you’ll be required to purchase various types of units. This seems to be the game’s way of preparing you for multiplayer. There’s no real action involved in the multiplayer component other than merely choosing an opponent to attack, though you will want to first scope out their profile before initiating an assault. Since you’ll gain experience and loot from attacks and raids, multiplayer is a necessary and meaningful addition. However, it’s neither engaging nor all that interesting a part of the overall package.

Visually, Modern War is quite attractive for the type of game it is. The sprites are detailed and animate beautifully, and there’s a ton of variety in terms of environments. Watching bombing raids is incredibly satisfying, and the music and sound effects really make the presentation pop.

Though the title of the game is perhaps a bit deceptive, Modern War is still a great social gaming option for folks who dig war themes. The game can be a little slow going until you’ve built up a base that yields a steady cash flow, and the multiplayer is pretty lackluster. But in short spurts, Modern War is a fun way to pass the time.