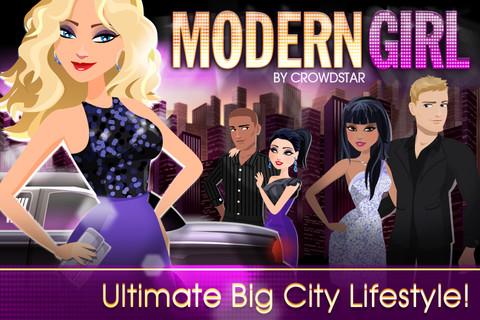 Crowdstar caters to the ladies again with Modern Girl on iOS

Modern Girl follows up on Crowdstar’s previous release for the Girl series, Social Girl. It offers a handful of new visuals and outfits as well as a few new concepts, but most of the gameplay is familiar. Modern Girl still fairly appealing to its audience, but the app is rather underwhelming thanks to copy-pasted features and poor visual presentation.

For anyone that hasn’t played any of the previous Girl titles, the premise is that players take on the mantle of their virtual selves and essentially try to live an ideal life doing work, finding boyfriends, and of course, shopping for clothes. That said, it’s all pretty bare-bones mechanics, with most of the play consisting of a handful of buttons strewn across a static screen. As far as Modern Girl is concerned, this formula hasn’t changed much.

Most prevalent in the new app, though, is the core fashion element. After creating their feminine avatar, players hit the boutiques in search of that perfect outfit. Like with Modern Girl‘s predecessors, players get the full shopping experience by getting to try on each bit of clothing – tops, skirts, dresses, jewelry, etc — before purchase. Nevertheless, there’s a bit more to it than just the aesthetic. In terms of game play, each piece of clothing has a sun or moon rating associated with it that ties into unlocking other areas of the game.

The two primary aspects of this are work and nightlife. Within the respective spaces, users can perform jobs for extra cash (at the expense of slowly recharging energy) or hit the dance floor in the hopes of meeting some new guys. The cumulative sun or moon rating from the clothes being worn at the time affect the quality of the player’s virtual life. For daytime work, it’s pretty straightforward: Better clothing earns more money. However, nightlife ties into a whole other aspect of the game: Dating.

When visiting clubs, players can flirt with a selection of guys. Upon doing so, they’ll see what they can earn from the character if they begin to date them. Yes, that’s a great lesson for young girls – date guys so they buy you stuff. Regardless, once guys become “boyfriends,” they can be taken out on dates, and the quality of date locales is tied to one’s clothing rating. The better the date, the higher the cost, but with that wallet hit comes a greater chance of earning a rare gift. If the date goes well, the relationship grows, and gift chances also increase. 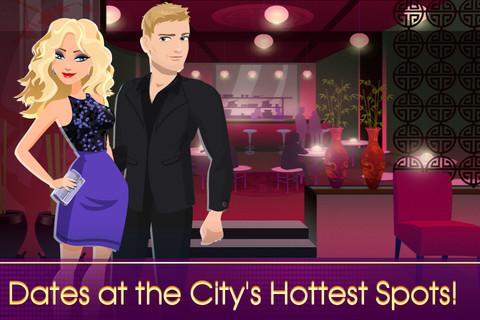 Aside from these mechanics, the only other notable feature in Modern Girl is that as clothing items are bought or earned, one’s “Closet Rating” also rises. When this happens, players will gain access to unique clothing boutiques which, expectantly, offer more fanciful and high quality clothing. It’s also worth pointing out that Modern Girl does have a wide variety of clothes to choose from, with each of its several stores offering different styles to sate most fashion appetites. Moreover, many of them will have periodic specials and sales which do help enhance the whole shopping mechanic.

The downside to Modern Girl is that it’s underwhelmingly presented, considering the company behind it. For the most part, the play feels virtually the same as the other Girl titles, and other than the clothing, it’s visually uninteresting. Everything is static and bland, and tapping on shops displays an ugly white box around it. Even all the outfits and character avatars are horridly pixelated, and clothes don’t even fit on them sometimes (spots of skin tone intersect many of the clothing edges). Sadly, it makes the whole game feel like a rush job.

The concept for Modern Girl is simple, but works well for its audience. Unfortunately, the presentation feels slapped together. It’s a free-to-play game, but considering the resources that Crowdstar has at its disposal, the amount of reused mechanics (and art for that matter), along with the game’s poor presentation, is just unacceptable.