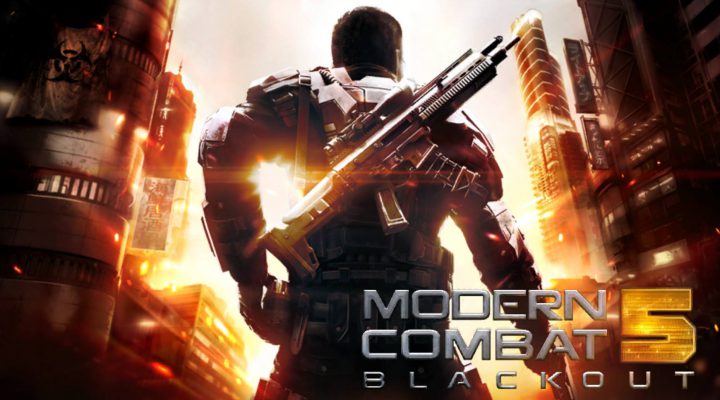 Gameloft knows how to perfectly execute the formula of a modern FPS.

The combined single- and multiplayer progression is a clever feature.

Because the game so closely follows the military FPS formula, it's hardly groundbreaking, innovative, or memorable in any way.

The touchscreen controls are often tough to play with – and the lack of gamepad support is baffling.

Modern Combat 5: Blackout shows that Gameloft knows exactly what they’re doing with this series. They know how to make a military-themed FPS, and they know how to make an impressive-looking game. But turning said game into a memorable and unique experience is something they’ve yet to quite figure out.

The basic concept really isn’t that different from past games in the series (or really, the genre at large): war has broken out, people betrayed each other, and now the only way to save the world again is for Phoenix to shoot every bad guy that crosses his path. I’m pretty sure this is a similar story to Modern Combat 4, which I’m pretty sure I played, but all I remember from that is that it involved a lot of shooting and the liberal use of profanity that felt a lot like a teenager rebelling against their parents.

If you’re a fan of that, you’ll be glad to know that this game has plenty of shooting and f-bombs too. 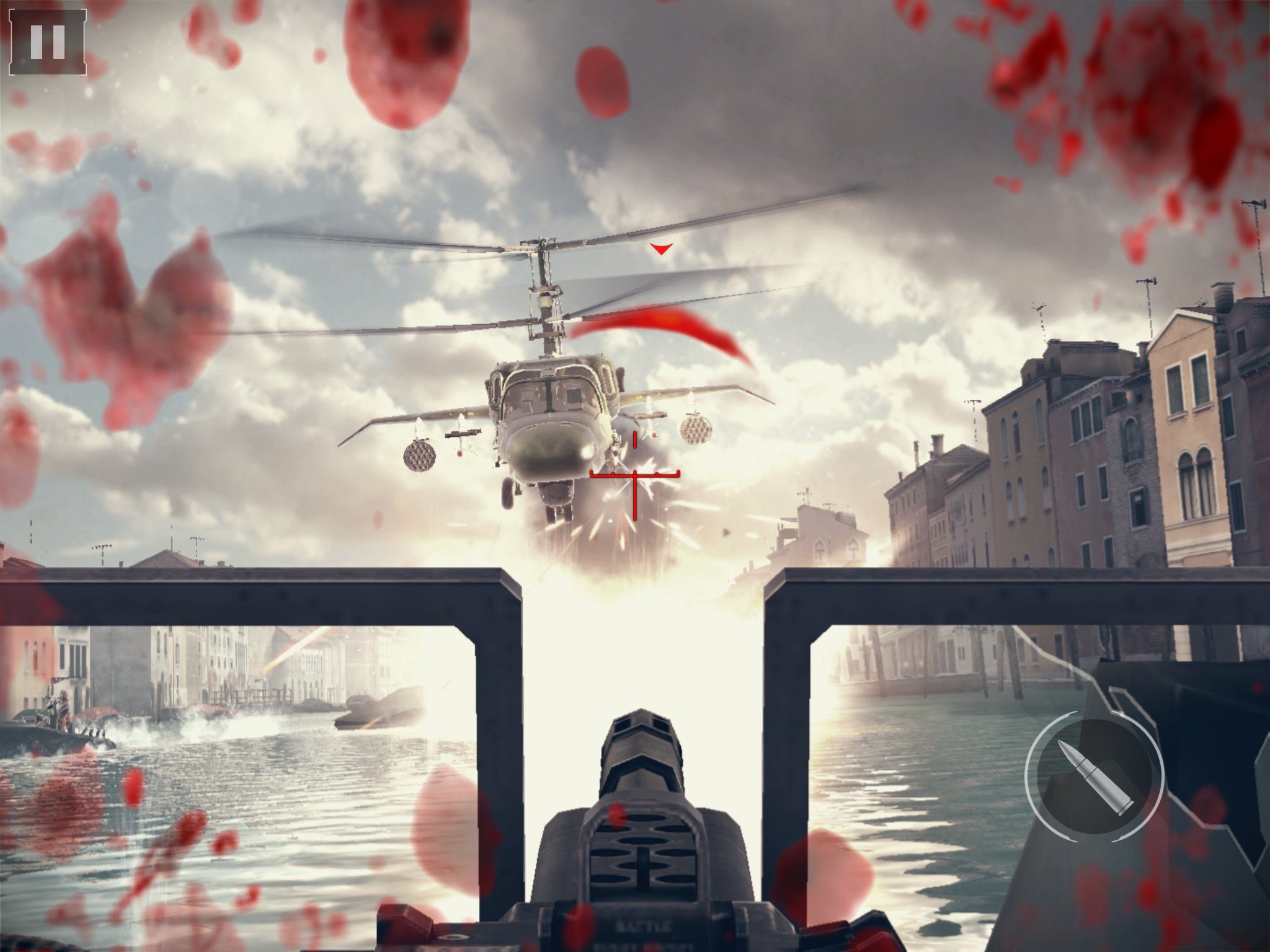 In terms of mechanics, this is really a run-of-the-mill FPS. Anyone who’s played Call of Duty will know the tropes used here. There are various modern weapons with the ability to aim down the sights to shoot more accurately, players can only carry two weapons at a time and can get special perks and upgrades for their weapons. There are a number of single player set pieces to play through, along with five modes of multiplayer, most of which are variations on deathmatch (and a capture the flag mode).

It’s also possible to form squads and participate in matches to improve the squad ranking.

The main innovation in Modern Combat 5 is structural: the game weaves single player and multiplayer into a single, shared progression. This means that every single player mission and every multiplayer match contribute to the same experience pool that you’ll use to unlock any weapons, attachments, and perks. This helps give the single player campaign more of a multiplayer feel, as most levels are designed to be 7-minute affairs like multiplayer matches are. 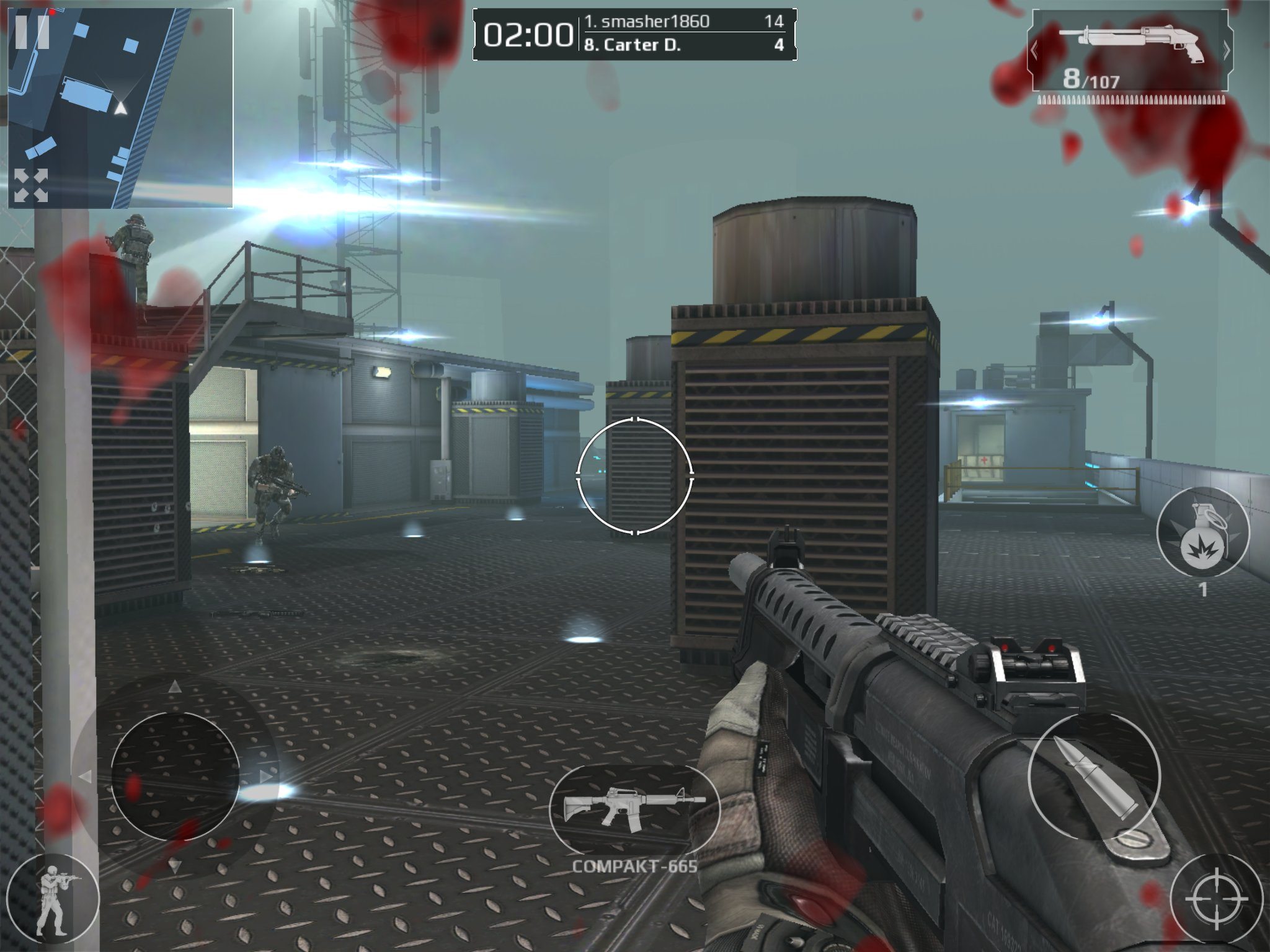 But what it also does is makes sure that nothing in the game is irrelevant. Single player is no longer an entirely separate thing to be ignored – instead it helps contribute to getting the preferred weapon loadouts in the multiplayer. There’s even an integration of multiplayer missions in the singleplayer, where playing a certain mode can help advance the progression to later levels with more missions.

While those who have zero interest in multiplayer might dislike being compelled to check it out, this benefits someone like myself who rarely touches the single player of most FPS games. It’s a very smart system. The drawback is that it requires being online all the time, because even a single player mission contributes to the multiplayer system. Those who want to enjoy this game on an underground train ride, on their wi-fi tablet, or are even behind a particularly restrictive firewall, won’t be able to enjoy this game’s solo modes without having an open online connection. It’s more justified than in other games that demand a connection, but it’s never not annoying. 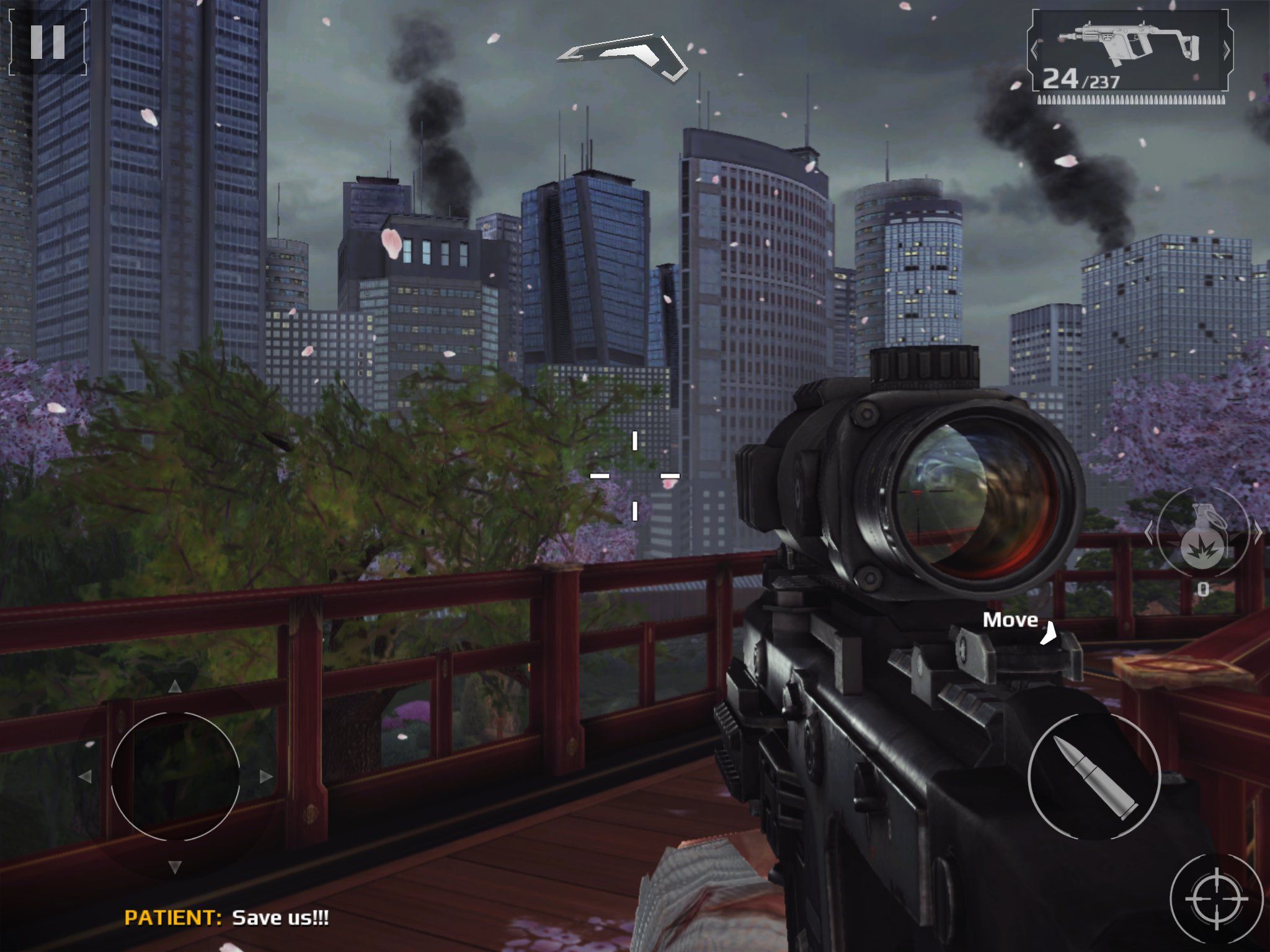 The touchscreen controls make me long for being able to use a gamepad, as turning around corners to aim at enemies is just a nightmare. MFi gamepad support is curiously missing at launch. I can imagine keyboard-and-mouse jockeys playing this game and despairing. But this is kind of the state of things at the moment with touchscreen FPS games.

Really, the best thing that I can say about Modern Combat 5 is that it is an extremely formulaic FPS game. It might mean that Modern Combat 5 won’t succeed in being memorable, but the game’s volume is constantly set to 10, with all the explosions and everything being of dire, life-changing importance. It’s delivering what fans of the genre are after.

Of course, it also reinforces all of the negatives in the genre too. The game glorifies war a bit too much, like when Phoenix collects a recon drone and says “nice!” in the middle of a warzone. The profanity feels like it’s swearing just to show off. It’s a regrettable culture.

But then, I’m not perfect. I’ve bought every Call of Duty game since Call of Duty 4, and while Modern Combat 5 uses the exact formula as that series, it’s one that’s really hard to mess up. The multiplayer works well over an LTE connection, even against opponents from all over the world. And it’s pretty fun to dominate free-for-all matches with a shotgun.

Touchscreen issues and a lack of controller support aside, Modern Combat 5 delivers on what it set out to do. What can I say? I enjoy the formula!

Guardians of the Galaxy: The Universal Weapon Review – The New Cool