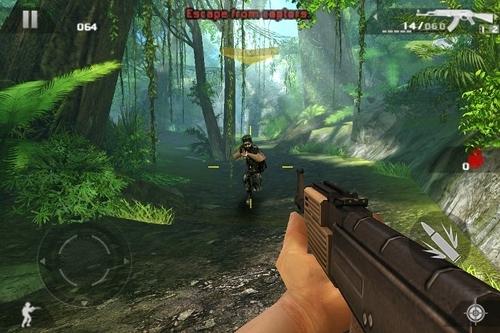 Modern Combat 2: Black Pegasus is quite possibly the best shooter on the iPhone to date

Gameloft’s first-person shooters have been, so far, fairly blatant clones of popular console franchises like Halo and Modern Warfare. This is by no means a bad thing, since the games have actually been pretty good. Modern Combat 2: Black Pegasus continues this trend, giving iPhone gamers a great FPS for the system that not only features a highly-polished single-player campaign, but also includes a phenomenal online mode.

So here’s how the story goes: you play as a soldier who is captured after his helicopter is shot down by insurgents in the Middle East. After being held captive and tortured for an undetermined number of weeks, you and a fellow prisoner end up escaping from the camp, during which time you blow stuff up, kill a whole lot of people, and generally engage in overly-manly behavior. After this daring escape you wind up traveling the globe as a combatant in the war on terror.

Visually, Black Pegasus is pretty stunning. In fact, I would argue that this is possibly one of best-looking 3D games available for Apple devices. The character models and environments feel like something we would have seen with the original generation of PS2/Xbox titles during the early 2000s. No matter where you look, everything looks razor sharp and crisp. Though after a while, some of the levels will seem a bit repetitive in design and you’ll get a little bored with killing the same generic terrorist villains as you progress through an area. That said, it should be noted that character models feature some really impressive facial designs and feature individual fingers on their hands (which is actually much more impressive than it sounds).

When you first start the game you’re given the option of playing with the accelerometer affecting the camera, which admittedly takes some getting used to. If you end up turning this feature on, the in-game camera will actually shift according to how you turn your iPhone. It’s a neat feature, but I wound up getting frustrated with it when I spent some time playing the game on a turbulence-heavy flight and found my perspective shifting pretty wildly. As a result, I wound up starting a new game with the feature disabled.

If you’ve played a recent title from Gameloft before this, Black Pegasus is going to feel pretty similar in a lot of ways. The default scheme consists of a virtual thumbstick and a button for shooting, with an option for melee attacks that pops up when an enemy is close enough. Thankfully the controls are entirely customizable,and the camera is of the drag-to-look variety. There are also quick-time events present, which are cut scenes that require you to shake the device in specific ways or tap certain areas of the screen in order to avoid an untimely death. 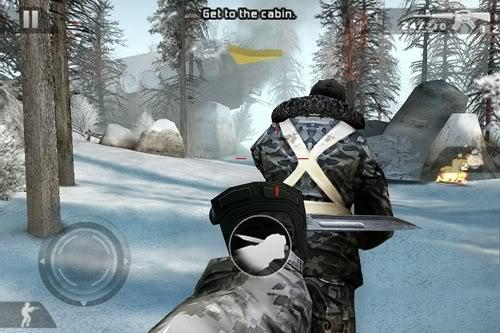 While the single-player campaign is enjoyable, it often feels a bit too easy. Even on the normal difficulty mode, your health will recharge in seconds, and your AI-controlled teammates are super-effective killing machines. The real challenge with the game, as well as the most fun, is actually found in the multiplayer mode.

The online experience is extremely robust, featuring a number of similarities with Activision’s Call of Duty games. There’s a levelling system in place that rewards you for kills, headshots, and kill assists. Every time you successfully pull off one of these maneuvers, you’re rewarded with experience points that increase your character level and unlock new ranks and weapons to use against your opponents. There are also a ton of online game types available: I stuck with regular/team-based deathmatches and capture-the-flag games, but those are only a few of the options available.

Modern Combat 2: Black Pegasus is quite possibly the best shooter that you’re going to find on the iPhone, which says quite a bit when you consider just how good Gameloft’s other titles have been. While the single-player mode is enjoyable enough, this is one of those titles that showcases just how great the iPhone can be when it comes to online multiplayer action – especially when you’re on the go.