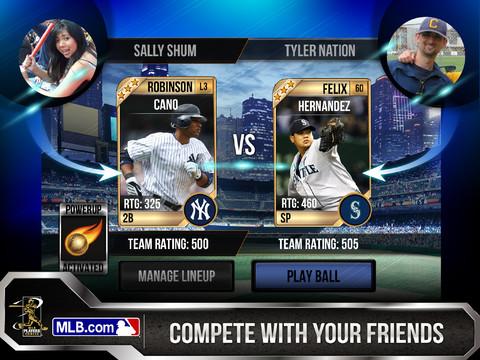 The windup, the pitch – it’s a swing and a miss!

A collectible card game based on Major League Baseball is a pretty good idea, and kind of an obvious one at that. Baseball cards are a staple among collectors, after all, and no sport is more statistics-oriented. But MLB: Full Deck just isn’t a big-league player. It looks impressive, with bright, colorful graphics and photo-quality images of more than 650 major league players, but that beauty is only skin deep.

You begin the game by choosing a name and logo for your team, selecting from any of the official MLB logos or one of several fakes. You’ll then be given a randomized rosters of real players and taken through a quick and not-terribly-informative tutorial that gives you the basics of playing the game (but not much else) and after that, you’re on your own.

Fortunately, there’s not a whole lot to it. Despite the huge number of real-life stats recorded for every player in the bigs, in MLB: Full Deck players are rated on just Power, Speed and Contact, with an overall rating that simply totals the three. You field one player at each position plus a designated hitter — this is apparently an American League game — a starting pitcher, setup man and closer, but you can carry multiple cards at each position in order to allow for substitutions. Each player also requires a certain number of “management points,” which are earned as you gain levels, meaning that higher-level managers can maintain larger rosters of more talented players than the newbies.

Getting those players is a different matter, however. New players will be added to your roster automatically as you play, but most of them will be fairly mundane, average guys who earn a decent living playing ball but never get closer to the All-Star Game than their television set. The star players, and especially the superstars, are harder to come by, being largely reserved for silver and gold — especially gold — “player packs” than can be purchased for real money.

In that way, and in many other ways, MLB: Full Deck works like most other CCGs out there. Playing games takes stamina, and once that runs out you must either wait for it to recharge at a rate of about one point per minute (it takes two stamina points to play an inning) or buy a stamina refill. You can also buy power-ups that provide your team with an overall rating boost for a single game, giving your guys a better chance of not getting clobbered when they run into the Yankees or Giants.

But several other conventional CCG features are overlooked. Players can have their skills boost through training, but they can’t be fused or evolved, which makes sense under the circumstances, no matter how much fun it would be to fuse Tim Lincecum with Prince Fielder. There are no clans or guilds, which is also understandable given the nature of the game. Less forgivable is the absence of trading. This is baseball, and baseball, from kids with cards all the way up to the offices of general managers, is all about trading. The game says it’s “coming soon,” but when and with whom – it appears that it may be limited to Facebook friends, as are all other in-game social functions – is a mystery. 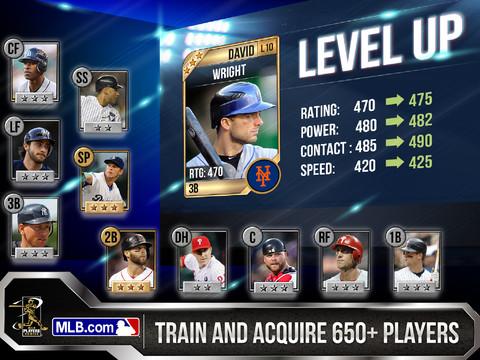 You can play against other people, but that’s simply a matter of tapping a name on a list and then watching the numbers appear on the scoreboard over nine innings. The single-player “season” is largely the same thing, the biggest difference being that you must tap the “play inning” button before every inning, in order to facilitate the stamina mechanism. Every so often a randomized message about a play pops up, informing you of a line drive hit or failed stolen base, but it doesn’t appear to have any actual impact on what happens.

That inability to influence the action is MLB: Full Deck’s biggest failing. I knew this wasn’t going to be a full-on baseball sim, but I expected to have at least a little bit of managerial control. Once every few games you’ll be presented with a scenario like “man on first, nobody out,” and given the option to swing for contact, swing for power or “ask the manager,” but the outcome seems randomized unless you choose to ask the manager, which guarantees success – and comes with a price tag. And it just doesn’t “feel” like basball; the game tosses out little bits of “baseball talk” now and then, but it comes across as awkward and inauthentic, especially in the way it constantly refers to games as “matches.” I could be wrong — I’m Canadian, after all — but I don’t think I’ve ever heard anyone ask to be taken out to the ball match.

MLB: Full Deck is a game on the wrong side of the Mendoza Line. It’s free, so you don’t have much to lose if you want to try it, but ultimately it’s a letdown on both sides of the coin: There’s not enough collectible card action for CCG fans, and there’s not nearly enough baseball for baseball fans.