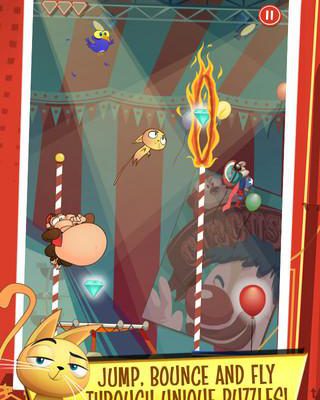 This physics-based puzzler is the cat’s meow!

Contrary to my initial beliefs, Mittens is not a game about keeping your hands warm during those cold winter months. But that’s probably a good thing, because the actual premise of this cutesy casual game is a lot more fun and appealing. Coming hot on the heels of the colossal success of Where’s My Water? and Where’s My Perry?, Disney’s latest take on the physics-based puzzler is all about love, cats, and disgruntled city dwellers.

In Disney’s Mittens, you play as the titular smooth orange cat that is light on his feet, and a real steal with the ladies: particularly, a sultry purple lady cat that Mittens is constantly pining after. The game plays like a hodgepodge of some of mobile gaming’s finest, with a gorgeous presentation and colorful illustrations that remind me of those old Disney movies from the 50’s, like Lady and the Tramp.

Your quest for love will take you to all sorts of fun and diverse locations, from the rooftops above a bustling city, to a noisy circus tent, to a dimly-lit network of caves. In each setting your end objective becomes different; you’ll find yourself bouncing towards bottles of milk, shiny red balloons, and playful field mice. My money is on a ball of yarn objective in a future title update.

The initial game features 3 episodes containing 20 stages each, and a fourth bonus episode that can be bought through an in-app purchase. Collecting three gems along every step of the way will unlock a handful of trickier extra stages, for a more purrrr-tinent challenge.

The extreme variety in gameplay is one of the biggest strengths of Mittens, but also the game’s biggest weakness. The game borrows heavily from other popular mobile franchises, to varying effect and consistency. You’ll use the classic Angry Birds slingshot control scheme to fling Mittens from rooftop antennas. You’ll swipe your finger to cut through planks of wood, much like you would string in Cut the Rope. And you’ll open up a water valve to ride on a stream of pressurized water, in an obvious nod to Disney’s own Where’s My Water? 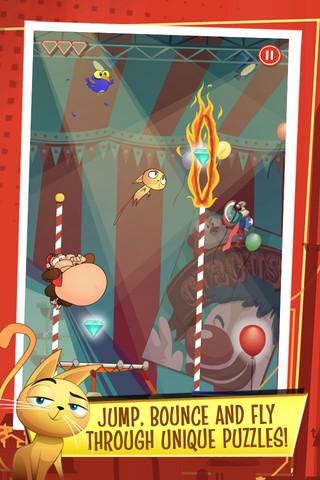 Each new setting alternates these basic mechanics to fit the new scenery (rooftop antennas become circus cannons, etc.), which I found to be a really nice feature. But even so, these gameplay elements are only scratching the surface of the many different ways you’ll end up manipulating the game environment to keep Mittens moving towards his ultimate goal. You’ll be hanging onto birds and dropping down onto awnings, throwing open windows to bounce Mittens in the opposite direction, and ejecting yourself out of speeding roller coaster cars as you guide your kitten to his objective.

While the steady influx of new gameplay mechanics always leaves the game feeling fresh and rejuvenated before things can ever get stale, it also highlights the fact that Mittens suffers from a lack of identity at times. Some of the playing styles are so drastically different that it becomes unclear what kind of game Mittens is supposed to be, and instead of feeling like a tight and well-defined experience, it comes across like the developer exhausted all options and tossed in every excess idea they could think of. 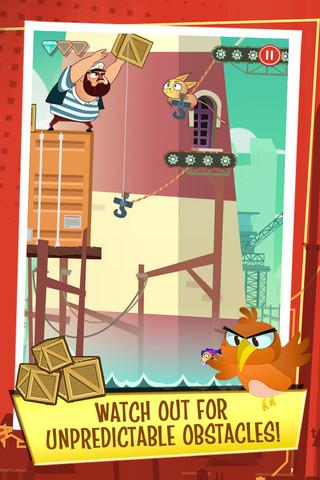 After every two or three stages, the game hits you with another simple tutorial to explain a new concept, but you’ll hardly get accustomed to how it augments the gameplay before the next one is introduced, and then the use of that first mechanic will slowly begin to diminish in stages going forward. The reoccurring presence of tutorials makes the game’s initial 60 stages fly by far too quickly, and with only one way to complete every stage, sometimes the game just feels like you’re following a series of prompts more than anything else.

But with that being said, Mittens is still a great mobile game, and boasts a shining production value that most developers could only dream about. While it may not have the true staying power of some of the casual giants it tries to emulate, as a physics-based puzzler, this friendly bout of kitty love still manages to hold its own in an App Store full of lovesick members of the animal kingdom. I’m looking forward to seeing what kinds of fun and exciting locations that Mittens’ heart will take us to next!