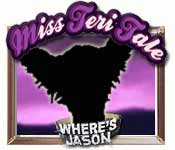 Teri Tale is an author who moves away from the bustle of New York to Peeking Town to work on her next book. Not surprisingly – at least to anyone who has played a hidden object mystery before – Peeking Town is not the quiet suburb that it appears to be on the surface. Things go sideways when Jason, a purebred Chinese Crested Dog and beloved pet of Teri’s new friend Abigail, goes missing. Teri takes it upon herself to find the missing pup, and voila – the premise for Miss Teri Tale.

The town is full of suspects, from Abigail’s neglected husband to the mailman whose ankles Jason used to nip, to the jealous neighbor whose own Chinese Crested Dog is competing for the same prize at the dog show, among others.

You gradually narrow down the list of suspects by searching for clues in and around their respective properties. Each location contains a list of items you must find and click on, such as a feather duster, tape dispenser, bunch of grapes, and life preserver. Some of the items will be key clues that will either further incriminate a suspect or clear his or her name for good. Through process of elimination, you’ll gradually begin to home in on the real dog-napper.

However, not before you’ve revisited the same 9 properties and 17 areas over and over again, backtracking your steps in a seemingly random and meandering investigation that drags on for a little too long. It doesn’t help that the game’s weak story doesn’t do a good job of driving gameplay forward.

There’s a weird subplot concerning a shadowy figure who is trying to blackmail Teri into finding Jason, telling her that if she doesn’t find the dog by the end of the week, he will pin the crime on an innocent person (which seems redundant, since Teri already said she’d search for Jason anyway as a favor to Abigail).

In between each level you’ll receive an “email” from the blackmailer containing a short video clip, but there is very little rhyme or reason to them. He rehashes the same meaningless phrases and suggests some random houses to visit to check for clues, but there’s no sense of momentum or logic to his messages.

It’s a shame that these video clips weren’t more compelling, because they’re the only visual part of the story; the rest is very text-heavy, relying on Teri’s diary entries and long-winded newspaper articles (that also appear between levels, but can be skipped) to move the plot along.

On the upside, you’ll get to visit some bright and interesting locations that feature unique photorealistic graphics and are enhanced by small animations like a caterpillar inching across a window sill, smoke rising from a chicken as it cooks on the barbecue, or the babbling mini-waterfall in the Japanese family’s Zen garden.

If you get stuck you can spend a clover to reveal the location of an item. You can carry up to five clovers at a time, and to replenish your supply all you have to do is visit Teri’s place and search for more clovers hidden amongst her belongings. It’s a good way of allowing players to self-regulate the game’s difficulty, and ensuring that people never get well and truly stuck, however only being able to collect two clovers at a time is a bit cumbersome because you have to exit and return to Teri’s room several times to stock up.

It’s slightly hilarious to think of Teri slinking around town breaking into peoples’ houses when they aren’t home, but that’s exactly what she does. In fact, there’s even a mini-game where she has to “crack” the house’s security code to gain entry. The second type of mini-game you’ll encounter is a straight-up picture-matching memory game.

Miss Teri Tale‘s pretty environments offer plenty for diehard seek-and-find fans to sink their teeth into; it’s just a shame that the game’ story fails to hold up its end of the bargain.