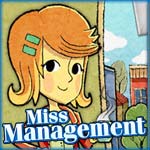 Imagine if you took every irritating office stereotype – the outrageous flirt, the nit-picking suck-up, the anti-social computer geek, the stressed out numbers guy, the incompetent middle manager – then took every irritating office behavior – gossiping, slacking off, cooking smelly foods in the microwave, hogging the bathroom, bullying – and mashed them all together. That, in a nutshell, is Miss Management. Oh, and did we mention that it’s your job to actually squeeze some productivity out of this mess?

Miss Management is one of the most inspired Diner Dash-type games to come out in a while, thanks to the entertaining cast of characters and the hilarious situations that they find themselves in – situations that will probably be all too familiar if you’ve spent any time in a cubicle maze yourself.

It falls to Denise, the newly-hired office manager at Conkling Associates International, to keep things running smoothly by delegating tasks, spending petty cash on snacks and office supplies, and making sure the employees aren’t getting too stressed out.

Each day, new tasks arrive on Denise’s desk from Corporate Office in the form of color-coded file folders. She can assign a task to an employee by picking it up and dropping it on the employee’s desk. Some employees are better at certain types of tasks than others. Timothy, for example, is a whiz at the green financial tasks but gets stressed out by orange art tasks. The IT guy, Winston, loves blue technical tasks, and the hippie freelance writer, Luke, excels at pink writing tasks. Tara, the shy artist, loves art tasks and nothing else.

As employees work, their stress level will rise as indicated by a little thermometer over their heads. If it gets too high, they’ll have a melt-down and go home for the day, leaving Denise a person down. Denise also has a stress level that starts to rise if unfinished work is sitting around for too long. If Denise’s stress maxes out, you’ll have to restart the day.

There are various ways of reducing stress around the office; what works and what doesn’t depends on the employee’s personality: Mahavir the slacker loves napping on the couch, while Winston relaxes by playing a few rounds on the office’s arcade game. Tara loves to draw pictures on the whiteboard, and Pearl (the old office battle-axe) takes smoke breaks.

You have to be careful, however, because what one employee finds relaxing might drive other employees crazy. For example, Timothy enjoys making beef stroganoff in the microwave, but Mahavir can’t stand the smell, and so his stress level will actually increase as long as Timothy is in the kitchen. Pearl’s smoking annoys Luke. Luke likes to work with the radio on, but Pearl can’t stand having music in the background – in fact, she hates all kinds of goofing off.

Each time a task is completed, a few dollars are added to the office’s petty cash fund, which Denise can use to buy items like donuts, which reduce stress; coffee, which makes an employee work faster; how-to manuals, which temporarily boost an employee’s skill in a certain area for one day; and energy drinks which make Denise walk more quickly.

The challenge doesn’t stop there. One of the things that makes Miss Management so interesting is that you don’t pass the level simply by earning a certain amount of money, or completing a certain number of tasks. Instead, you are given a series of goals to complete, like bringing Tara five colored markers, making Luke go to the washroom five times, letting Pearl smoke for 90 seconds, or giving Mahavir 10 technical tasks to complete. Given the complex set of likes, dislikes and talents of each character, juggling everything so that no one stresses out is a challenge indeed.

By doing it this way, each one of Miss Management‘s 30 levels feels unique and fresh, with goals based on a rich storyline brimming with office drama and politics. Employees quit and develop crushes and rivalries, rules like "no snacks" are imposed, and Denise must deal with a few crises, like when Pearl pulls a power-trip and tries to take over the office, or when Duncan, her out-to-lunch boss, introduces one stupid idea after another.

The only thing I regretted about Miss Management was that Denise could only carry one thing at a time. Given that she clearly has two hands, it seemed strange to not be able to pick up two tasks at once and save some time instead of having to walk to and from a desk twice.

That one issue is the only fault I could find with the game, however. Miss Management really is a superb title that delivers great gameplay and is a clever and often hilarious satire of office life.