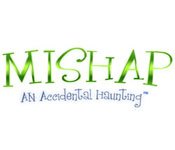 Take a bit of Beetlejuice and mix it up with Ghostbusters, and you have the basic idea of the story behind the new hidden object game Mishap: An Accidental Haunting. Constantly tormented by ghosts, the Burtons are debating whether or not to abandon their lovely new home when the mysterious ghost hunter Milton Hobblepop makes a particularly fortuitous appearance at their front door. Lucky coincidence, huh?

To rid the place of ghosts, Milton must travel to the different haunted areas of the house and rid them of their spectral energy. Each region has four rooms – a room that acts as a hub and three rooms branching off of it. Each room has a list of objects that were touched by a ghost and need to be removed before the place can be truly cleansed. Each region is haunted by a main ghost whose back story you’ll piece together by finding newspaper articles, journal entries, and the like. You don’t have to pay attention to these details if you don’t want to, but discovering why each ghost is so upset is part of the fun of undoing the hauntings.

Each room in the house also has at least one lesser ghost lurking within it, which you can only see when using a special locater device that renders the spirit visible. Busting a lesser ghost is simply a matter of running the locater over the room, watching the meter to if you’re warm or cold, then clicking on the ghost when you finally uncover it. It takes three clicks to catch each lesser ghost, and ghosts relocate to a new spot in the room between clicks. It’s a fairly simple minigame, but it does get rather repetitious.

The rooms that you’ll be searching are cartoonish and well drawn, but don’t let that fool you – these searches can be quite challenging. Items are well concealed, and the hub rooms are so large that you can’t see everything at once, but instead have to shift focus back and forth. You have rechargeable hints at your disposal, but getting a new one isn’t as easy as simply waiting for the meter to refill. The hint tool has four light bulbs, all of which must be lit in order for you to get some help. Finding an item lights a bulb, and clearing a room refills it completely. You can move freely between the four rooms of a region, which really helps if you need to fill your hints back up, but you’ll still need to be smart about when you call for help.

After you’ve found all the items in a region and busted all the lesser ghosts, you’ll have one last riddle to solve: a rebus puzzle that points you to a "secret" area somewhere in one of the rooms. Find that location, and you’re ready for your showdown with the main ghost. Using a tool that’s been assembled from bits and pieces you’ve found in each room, you play a minigame based on that particular ghost’s personality. For example, you snap pictures of the failed actress, but follow a recipe for the frustrated chef. Each game has several rounds, and depending on how well you do, you can earn a trophy at the end. You can choose to skip these games if you like, but they not only extend your overall play time, but they’re creative and quite entertaining.

Mishap is delightfully inventive, but not without its frustrations. Its instructions aren’t always as clear as they could be, which can be particularly frustrating during the final encounter with the main ghost. Moving from the hub of a region to the satellite rooms is simply a matter of finding the doors, but they’re not always immediately obvious and it’s too easy to miss the small green arrow that gets you back to the hub room.  Still, these are minor complaints in what is otherwise an entertaining, amusing, and refreshingly different hidden object game.

Oh, one last thing: Try not to have too many incorrect clicks. You won’t like what happens if you do…